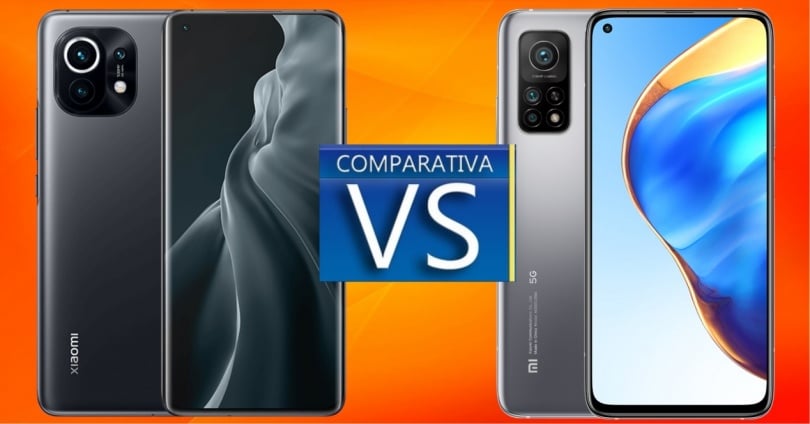 The new Xiaomi Mi 11 once again attracts the eyes of locals and strangers, since we are facing the latest launch of the brand. However, once again we have to review the portfolio of the firm, to compare it with other terminals launched not long ago, and that could compete within your own home. One of the best placed to do so is the Mi 10T Pro.

The price is always important, for this reason, we want to see if the Mi 11 is really up to the task worth the outlay, having at our disposal beasts like the Mi 10T Pro, which was presented in September last year. It goes without saying that the Mi 11 is ahead in almost all technical aspects, but it is interesting to see in detail their differences and the advantages of one over another. If we take into account the weight and thickness, we see how Xiaomi has worked this aspect well for the Mi 11, with its 196 grams and 8.1 millimeters thick. The Mi 10T for its part, goes up to 218 grams and 9.3 millimeters. Both are compatible with HDR10 + technologies, but there is an abysmal difference in the brightness of the panels, with the 1,500 nits of the Mi 11 and the 650 nits of the Mi 10T Pro.

The most powerful Snapdragon

It is the turn to see what each one is made of inside. The truth is that we find the Qualcomm seal in both, with the powerful and more current Snapdragon 888 in the case of the Mi 11, and the Snapdragon 865 in the Mi 10T Pro. In Spain, the two terminals are available in the same versions, that is, 128 or 256 GB of storage, but always with 8 GB of RAM. The advantage could have been on the side of the Mi 11, if Xiaomi had brought to Spain the variant with 12 GB of RAM that is sold in China. This, translated into performance terms, means that we are facing two beasts that can with everything we throw at them. However, if we want to squeeze the performance of both, we must check them with a bechmarking program such as AnTutu. In this sense, we see how the Mi 11 has reached 710,000 points, while the Mi 10T Pro exceeds 646,000 points. It is not at all a scandalous difference, since both have plenty of performance for the current Android requirements in any type of application, multitasking or the most demanding games of the moment.

On paper, there are not too many changes if you look at the hardware of the cameras. Both have the same configuration, with a 108 megapixel main sensor, a 13 megapixel ultra wide angle and a 5 megapixel macro sensor. The Mi 11 is accompanied by a Dual-LED flash while the Mi 10 Pro has a single-Flash. In both cases they have a 20 megapixel sensor housed in the hole of their screens. The options to record video are the following in both terminals:

How could it be otherwise when we talk about the latest high-end Xiaomi, both are compatible with 5G networks. They also have stereo speakers but none have a 3.5mm headphone jack or FM radio antenna. Both have other connections such as NFC, USB-C and a fingerprint sensor on the screen to increase security. It should be noted as a small difference, that the Mi 11 arrives with the Bluetooth 5.2 standard, compared to the Bluetooth 5.1 standard of the Mi 10T.

The Mi 11 is a native terminal of MIUI 12.5 and Android 11, but the Mi 10T Pro follows closely, since it has begun its update to the same version. In the battery section, the Mi 11 reaches 4,600 mAh with a very powerful 55W fast charge , which fully charges the device in 45 minutes. The Mi 10T will take a little longer for its 33W fast charge, although it has more capacity with its 5,000 mAh.