The resolution of the screen in a mobile phone has always been a factor to take into account when buying a new terminal. It is evident that a screen looks better the higher the resolution it has. And by that rule of three, mobiles with 4K resolution screens should be the most desired and common in the high-end. But not so, why?

In these times, 4K resolution is the majority when we talk about new content, so it would be normal to be able to see these in their native resolution on the mobile. But unfortunately this is not the case, and it has several explanations.

If you want to differentiate yourself, get a 4K mobile

Traditionally standard mobiles, even in the high-end, have offered Full HD resolutions, while the flagships of different manufacturers have opted for QHD screens, or also known as 2K. But beyond this resolution we have only come across 4K mobiles in Sony‘s high-end range . This is the only manufacturer that bets on them.

In fact, some of their mobiles have been the ones with the highest pixel density in their panels throughout history. For example the Sony Xperia XZ Premium has been the terminal with a higher pixel density. This reached an incredible 807 pixels per inch . To give you an idea, the Samsung Galaxy S21 Ultra has a density of 515 pixels per inch, although yes, it is a larger panel. Therefore it is clear that the advantages on a visual level are obvious. So the question is, why not bet more on these screens?

Resolution isn’t everything, for many

From my own experience I can assure you that content in 4K and with adequate HDR on a mobile phone is a pleasure for the eyes. But the reality is that it is not a practical resolution for many reasons. And it is that the more resolution a screen has, the more power a phone must have to be able to render the contents at this resolution. Also, operating systems are not designed for this resolution , and original elements are usually scaled at this resolution. And it can be said that they are underused. Since a 4K screen in a Sony has an Android operating system like the rest, with 1080p Full HD resolution, so it does not take full advantage of it. 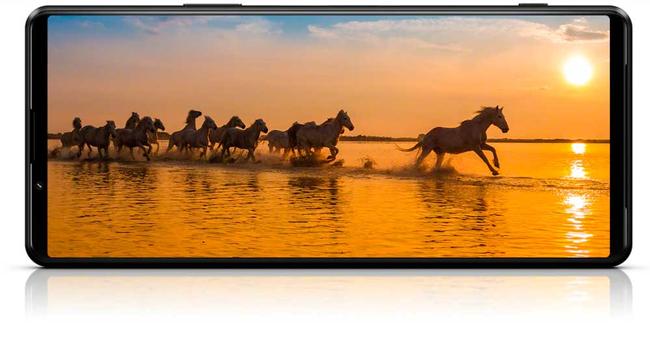 And without a doubt the main reason why they are so scarce is that users throughout this time have not valued this feature as something crucial when deciding on a new phone. Simply because they have understood that the differences at the visual level on a screen as small as that of a mobile phone are not appreciated. Something that is very different on a television, where the size of the screen, many times up to ten times larger, does make the resolution more noticeable. So although on a personal level I think that 4K screens do offer a quality bonus to phones, the reality is that it is not enough for users to consider it essential. And that is what it commands, that is why only Sony bets on them, as an element that differentiates it from its competition , but not precisely because it is what users demand the most.