Much earlier than expected, Xiaomi‘s next high-end has been seen in high-quality images, showing us its capabilities when it comes to cameras. An image that reveals not only its design, but also the main characteristics of the triple lens.

Xiaomi has been developing this model for some time, as it usually does every year, although this time we have had the possibility, or at least it is what it seems, to see it much earlier. Last year it was in December when the Mi 11 was seen and now 5 months after its possible presentation, we know one of the most important sections of the future terminal.

This image has been seen for the first time on the Weibo social network, where a user has shown the photo of the module that does not correspond to any other Xiaomi mobile seen so far. In the comments of the publication, reference is made not only to Xiaomi’s Mi 12 , but also to the fact that it could be the Xiaomi Mi Note 11 that we have been waiting for so long and for which there are many rumors but little verified information. 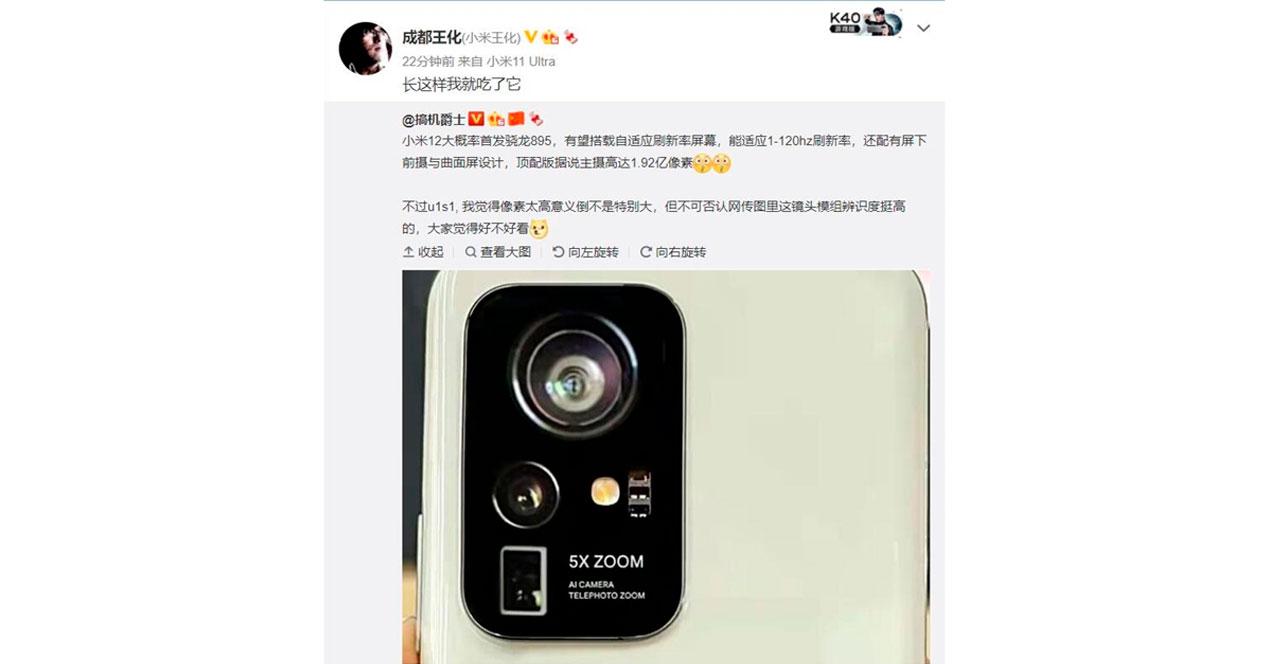 In this case, the design of the Xiaomi smartphone is modified compared to the different Xiaomi Mi 11 from last year. Now the increase in size in the main sensor of the Mi 12 is remarkable and that should be explained by the information of the Sony IMX800 sensor that we could also see in the high-end of Google and Huawei, among other manufacturers.

The next of the lenses that we find on the rear panel is the one that would correspond to the wide angle, an already typical Xiaomi move in all price ranges. Along with this we see the flash that will be in charge of lighting the scenes and finally an important detail, a telephoto sensor. In the module we can see that it will be 5 increases, so it will improve with respect to the 3 increases of the previous generation.

The image that has been leaked is preceded in turn by the information that the user lets us read in the publication with perfect Mandarin Chinese. In the publication, he explains that the main lens will be 192 Mpx, which would be the highest resolution in a mobile camera seen so far. However, this data we take with tweezers since since the existence of that sensor is rumored, it has focused on the next Mi 12 Ultra, the older and advanced brother of this Xiaomi terminal.