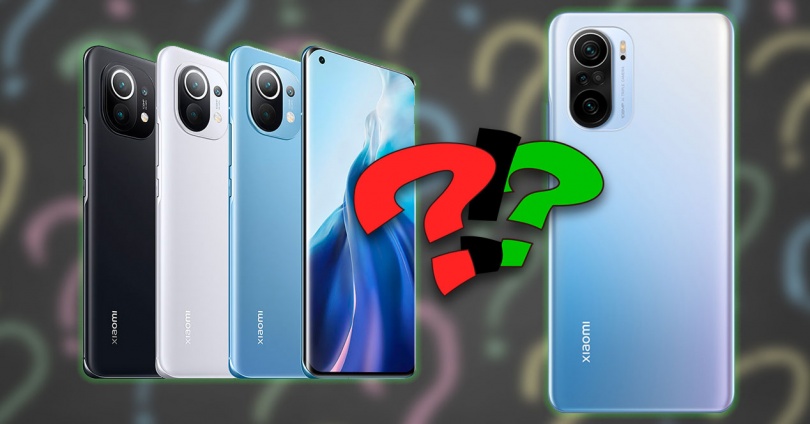 Xiaomi has flooded the market with countless models and versions of the Xiaomi Mi 11 that hit the market at the end of last year as a preview of a very complete shipment of mobile phones. With so many similar models, it is logical that users are involved in a sea of doubts.

The example of this is the Xiaomi Mi 11i that was presented a few days ago on the market and that, on paper, looks identical to the original Mi 11. For this reason we face them in this comparison where we point out both their similarities and their differences.

What features do the Xiaomi Mi 11 and the Mi 11i share? There are three major components that remain unchanged between the two models, and all of them are guilty of offering a correct performance of the mobile in any situation.

The Xiaomi Mi 11 was the first smartphone announced with Qualcomm’s new Snapdragon 888 chipset, manufactured in 5 nm with eight cores where the Kryo 680 Prime at 2.84GHz stands out based on ARM‘s superior Cortex-X1 design. The chip features the Adreno 660 GPU supporting OpenGL ES 3.2, Vulcan 1.1 and a new variable speed shader technology. There is also a new built-in X60 5G / LTE modem that supports Wi-Fi 6, there is native support for UFS 3.1 and also a new QuickCharge 5 option.

As expected, the two smartphones run on Android 11 with MIUI 12 , and are pending to receive the corresponding MIUI 12.5 update.

Since they share a processor, the 2 smartphones share compatibility with 5G SA and NSA networks, Wi-Fi 6, Bluetooth 5.1, a USB Type C port, a fingerprint sensor located under the screen and the classic NFC and GPS options. Mind you, there is no headphone port on either one. Although the design of the high-end terminals of the Chinese brand may seem similar, if we look closely as the screen is the main change between the two phones, but it is not the only one. The camera also undergoes a slight alteration at the rear.

The main difference between the Xiaomi Mi 11 and the Xiaomi Mi 11i is in the display. The first sports a curved glass that expands on the sides of the device while the cheapest model is a clear bet for those who prefer a flat screen.

The two Xiaomi Mi 11 go on the market with the same 108 MP main sensor and a 5 MP Telemacro. However, the wide angle is different. The Mi 11i has a lower resolution wide angle, being 8 MP compared to the 12 MP wide angle of the standard Mi 11.

Beyond this, the rest of the technologies are still present in the two mobiles, such as Dual Native ISO technology, 8K video recording, or the Ultra Night Video mode.

The front camera is still 20 MP on both phones.

The Xiaomi Mi 11i has 4520 mAh, 80 mAh less than the Mi 11 but on paper the autonomy should be similar due to the differences in size and resolution of the screens of each mobile.

Charging technologies are different, as the Mi 11i has a 33W charge, while the original Mi 11 reaches 55W; charging the cell fully in 1 hour. To this we have to add that the most expensive model of the two has a 50W wireless charge.

The key is in the price 100 euros are the key to finish analyzing the difference between the two smartphones. The Xiaomi Mi 11 was put on sale in its most basic configuration for 749 euros in our country, but the “lower” model has a price of 649 euros.

It’s up to you to figure out if it’s worth sacrificing a bit of camera quality and battery charging capabilities. Although the cell is smaller, the screen size is also smaller so this should not affect the autonomy of the Xiaomi Mi 11 and Xiaomi Mi 11i .