Home security has become a key for users, so it is not surprising that there are not a few who decide for the use of internal cameras that allow to know what happens in real time thanks to connectivity and mobile devices. Well, one of the options that currently exist is AKARI , a model that has its differentiating element in the use of thermal detection.

The functionality offered by this accessory is quite wide , since it can be used efficiently in options such as those listed below: fire alarm, burglar alarm, stationary alarm and, even, it is possible to customize events by using the free IFTTT tool. An excellent possibility that exists in the device we are talking about is that actions can be configured so that when detecting actions or events that are detected, a notification is sent for the existing application for iOS and Android .

This camera offers compatibility with the most used voice assistants today, such as Google’s own or Alexa (created by Amazon), so it is possible to use the options offered by AKARI only with the use of voice This, among other things is achieved because the device includes WiFi connectivity, which is a success for the user to access since it can manage everything without the use of cables. By the way, that another of the good features in the accessory we are talking about is that it offers night vision , something that is sure to be useful for many. 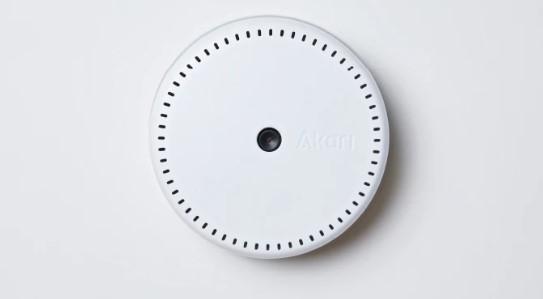 AKARI, a product that does not lack Artificial Intelligence

When detecting movement or an element with a temperature that stands out from the rest of the options in the place where the camera is, different processes are executed to establish results that are useful for the user. Thus, for example, it is possible to discard boiling water as a fire by emitting heat and, this, is achieved by using specific hardware to perform AI works in AKARI. And, the best of all this is that there is the possibility of configuring the behavior of the device in question.

In what has to do with privacy, the work that is done is very positive, since it does not attempt against what users should have at home. What is done is to execute a layer of color on the element that is displayed so that it is not known exactly what is being focused with the camera, so that the HD image quality in AKARI is not used to show the interior of the homes By the way, what is recorded can be stored to create a history if it is made up, and this is achieved by using a microSD card that is inserted in the adapter itself (a 4GB one is included, but can be used to larger capacity models).

Final details and purchase of this home thermal camera

The installation of AKARI is so simple that you simply have to place the main element on a base that can be hung from a ceiling or hung on the wall. The device does not lack the use of different LEDs , which among other things serves to see the operation of the camera and, an example, is to know if it has a WiFi connection.

To buy the accessory we are talking about, you have to go to Kickstarter, where you have already obtained financing and shipments will be made in June 2020 . The price of an AKARI camera is 115 euros, so it is a very economical model for the options they offer that allow you to control everything that happens in a house and even with those that are inside them.

Buy the AKARI camera on Kickstarter
﻿