A quick crossword that we solve in a couple of minutes every day. Wordle is the trendy game, an online pastime that has become a success and whose objective is to guess a five-letter word in just six attempts. You’ve seen it on Twitter these days: little yellow, green and gray squares that all your friends share. It’s Wordle and we’ll explain what it is and how to play it, how to try the trendy pastime that can distract you for a few minutes every morning.

Its original creator is Josh Wardle , a computer engineer who explains to the New York Times that he created the game for his partner, a fan of crossword puzzles. He shared it on WhatsApp with friends and the hobby spread through social networks and messaging applications to what we know today. Until Daniel Rodríguez created his version in Spanish and managed to increase its popularity in our country. An adaptation that everyone has been talking about in recent days and that already has enough words to continue increasing its success for many more months. Wordle is available through the browser and it is a viral game that you can try from your mobile phone, tablet or computer because we will only need access to a browser, whatever it may be. We simply have to go to the corresponding web page and dedicate a few minutes to it each day. It’s free, you don’t need to register and you’ve surely seen that all your friends are sharing their results on Twitter and Instagram every day. We access wordle.danielfrg.com and we can start playing.

The operation is very simple: there is a square with six rows and five columns and a QWERTY keyboard under the grid. The first thing we must do is write a word in the first of the rows, using the keyboard on the screen. When we have written it, press “enter”. The letters will then have three different colors: gray, yellow or green. 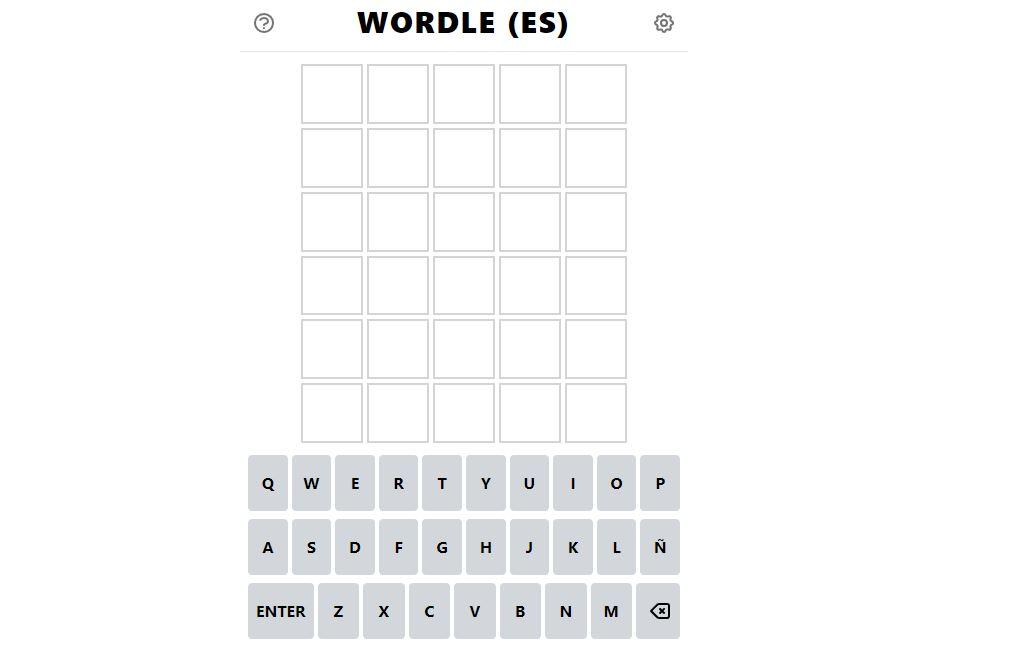 They will also change on the keyboard to make the process easier: the ones you have already used will appear following this color code on the keyboard, as you see below. Grey: there is none, green: it is well placed, yellow: out of place.

We only have six tries. Trying the different words and knowing what letters are or are not, we must get the word that must be guessed before reaching row six. When you guess it, the game is over. Until the next day. Because Wordle does not allow you to play infinite times each day, but rather it is a website that adds a new word each day. If you hit or miss, you can’t try another one until the next day. You will see a counter on the screen with the hours left until the next one.

Once you have guessed right you can share your result. It is what you have seen on Twitter during all these days. That message that says “Wordle (ES) 4/6” and what it means is how many attempts it took the person to guess the exact word . Accompanying the phrase we see the scheme with its successes and failures until we get all the correct letters.

When we finish doing it, we just have to click on “ Share ” and our result is copied to the clipboard. Once you have it copied, you just have to go to Twitter and paste. Your result and your image with the little squares will be copied like this (as you can see in the screenshot below). Thanks to this option to share results, the game has gone viral.

Although Wordle is in fashion and everyone is talking about it in 2022, the features of the game are not new and during the nineties it had its television version. El Lingo was a Ramoncín program broadcast in Spain from 1991 to 1996 and it consisted exactly of that: a mix between bingo and Master Mind where contestants had to guess five-letter words in a maximum of five attempts and were told if they appeared in the word, if they were in the right place or if it wasn’t part of it. Colors were used in the same way Wordle does today in millions of homes every morning in our country. Ramoncín’s Lingo can still be seen on RTVE Play .

The format was also announced in September 2021 on Canal Sur , the Andalusian television. Twenty-five years later, the format in which two couples compete to find the words and accumulate money was broadcast again. In November 2021, Lingo reached Andalusian viewers with Ana Ruiz as presenter and broadcasting every Saturday and Sunday at 7:40 p.m.

When a four-letter Lingo gets complicated…🤯
We are already closer to the weekend and, therefore, closer to Lingo!🤩 Who wants to play?

Now we can not only guess the words on weekends if we have tuned in to Andalusian TV or watch the Ramoncín archive, but Wordle has become a phenomenon to compete day by day with friends and check who is the fastest guessing them.