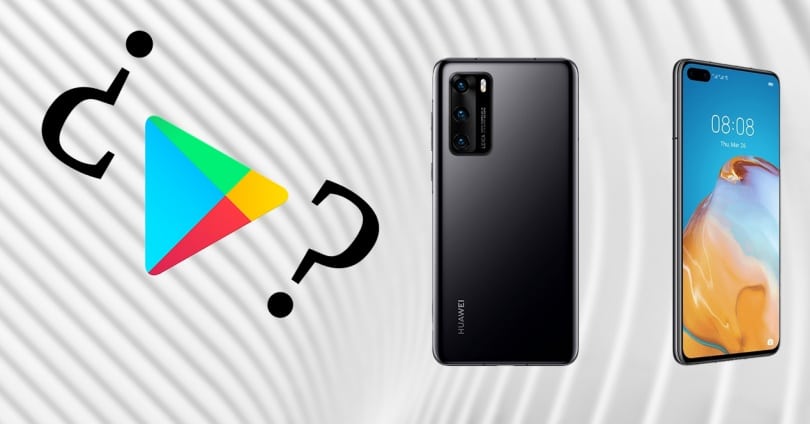 Huawei was added to the blacklist of companies in the United States, since then the veto that prevents them from using Google Services , or also known as GMS, was put in place. It all started in May 2019, which is remembered as one of the biggest changes in the mobile phone industry, as the Chinese manufacturer was forcibly prevented from using these services due to their inclusion in the Entity List of the department of commerce of Following this, the company has continued to launch new mobile devices, but without Google apps.

From that moment, Huawei’s mobile sales were caused to plummet over time and that, today, great bargains can be found in the latest models of the brand. In addition, several solutions began to emerge that have been validated with the aim that Huawei users can continue to enjoy Google Play apps. However, there is an important reason that we will explain why you should not try to install these services on the mobile phones of the Chinese company.

For those who do not know, Huawei Mobile Services (HMS) is the alternative of the Chinese brand so that their mobiles can survive without Google Mobile Services (GMS) after the veto that we have mentioned above. And it is that the GMS of our mobile serve to operate application services such as location, payments, or connectivity.

Since the new Huawei mobiles that have been released from 2019 do not have these GMS , they cannot use these apps. That is why Huawei has developed its own services, known as HMS, which are used to create its own APIs just like other platforms such as Facebook or Amazon do today. In addition, it is also compatible with Android since the new mobiles of the Chinese manufacturer have this operating system and HMS. As we mentioned, after Huawei’s entry into the List of Entities in the United States, the Chinese company was forced to stop using the GMS in its new smartphones. Without a doubt, one of the worst consequences of this is that Huawei cannot include Google services and applications on its smartphones . So he had to find an alternative, so he started using HMS, his own services, and his own app store.

In case you don’t know, AppGallery is Huawei’s application store , just like Apple App Store is for Apple and Google Play Store is for Google. This store is available in 170 countries and comes pre-installed on Huawei devices. Although it is not a novelty that arose as a result of the veto, it was launched for the first time in China in 2011. It was even before the blockade that the company decided to launch it internationally, in April 2018, with the arrival of the Huawei P20. In AppGallery we not only find an application gallery, but it is an interconnected system where apps can appear and be promoted in other places to duplicate connections. Likewise, Huawei’s idea is to focus on having to increase its catalog of apps in order to compete against Google Play.

GMS can be installed

As we have been telling you, today, there are different possibilities to install Google services on Huawei smartphones like the P40. The problem is that, apart from not having the Google certificate, the experience that we will have after installing the GMS through one of the alternative routes that we can find will not be the same. And all for not having the certificate, causing various apps such as those of banks to fail to run since it is not a certified device.

To this must be added that the Google Pay payment system will obviously not be available and other apps such as Netflix cannot reproduce HD content since said smartphone does not have the Widevine certification. Luckily, the Chinese manufacturer’s mobiles that went on the market before May 16, 2019, if they continue with Google services, having full access to all the applications and security patches that will be released.

The absence of these services not only caused that the new Huawei smartphones such as the Mate 40 Pro, despite having incredible specifications, present some important weaknesses in terms of software, since they have run out of GMS. Likewise, the lack of these services has caused sales to decline to large levels in recent years. And although it is possible to install Google services from the outside , the Chinese company has been continuously warning its users of the dangers that this can pose on their terminals.

This is because Google only makes its services and apps available to devices certified with Play Protect, a native security app. And since Huawei is no longer a collaborator, the smartphones of the Chinese manufacturer are no longer certified and, therefore, are not suitable to be able to use the GMS , although there are different methods to install them. And not only this, but Huawei has already warned its users that loading the apps outside is risky since the APK that the app contains may have been altered with malware and compromise the security of said mobile devices.

Can I update my Huawei after installing the GMS?

Another of the doubts that haunts the heads of many users who have been affected by this veto and that prevents them from having GMS, is that it will happen to their mobile devices after installing these services through any of the ways that are available today. In addition, you have to be aware that some of these methods are permanently capped by the Chinese manufacturer or even by the app developer himself for personal reasons. Leaving this aside, we will not have to fear for the future updates that are given to our Huawei terminals. As long as they work, we can update each of the Google apps that we host on our phone in the usual way, from the Play Store that we have managed to download.

In the same way, the same will happen with the operating system, which you can update without problems to the different patches that the Chinese manufacturer is making. However, we recommend that you do not go from a version of EMUI to a new one, since it could be the case that some of these Google apps are left by the way due to a new action by Huawei. Nothing should happen but just as it is not possible to use Googlefier in EMUI 11, it is possible that when going from EMUI 10 to the latest version of the system some applications stop working as before.