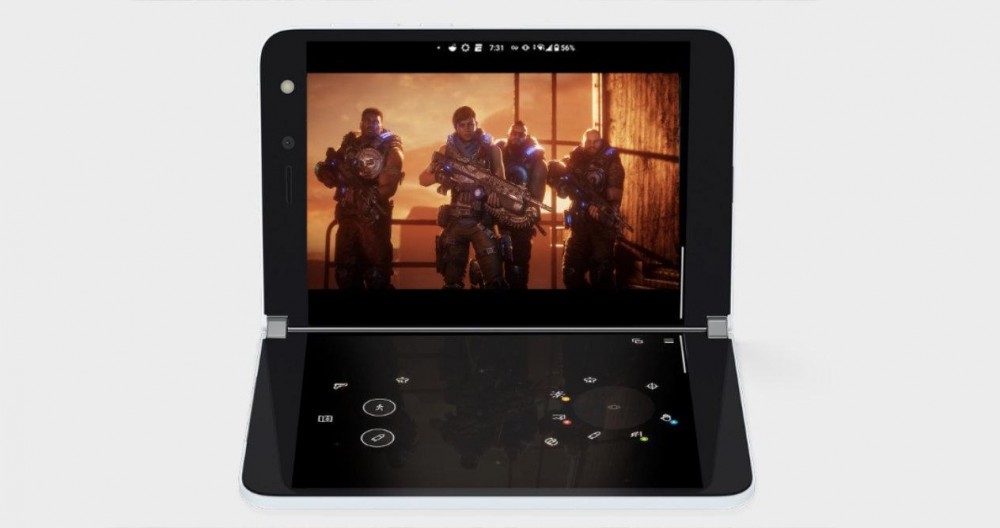 They said it as a joke and in the end it has become a reality. Microsoft released a new update to its application for Android terminals, Xbox Cloud Gaming (xCloud). This now supports Android devices and that, attention, allows to turn the Surface Duo into a kind of Nintendo 3DS with Xbox games.

It has been almost two years since Microsoft introduced its Surface Duo. A quite striking device and for many a very attractive and interesting approach to that idea of a folding or double screen product.

Well, during that presentation the company joked with the idea of using it as a kind of portable console with Xbox games. Now what seemed like that, a simple joke, has become a reality thanks to the latest update of the Xbox Cloud Gaming application.

This application that allows access to the xCloud service on Android devices is updated among other things to offer support for the use of dual screens. Why this support? Well, as you can see below, to turn the Surface Duo into a kind of Nintendo 3DS . That is, a portable console that this time will allow you to play all the games available through Microsoft’s streaming game service.

Microsoft is turning its Surface Duo into a handheld Xbox today. The latest app update for Xbox Cloud Gaming (xCloud) let’s you use one screen for touch controls and the other for the game. It’s like a Nintendo 3DS with Xbox games. Details here: https://t.co/ubbsEAW3r8 pic.twitter.com/aP94t9xgzC

Interesting? Well, it seems to us that it is. As Tom Warren shows in The Verge, the result is quite striking and surely more than one is already dreaming of the idea of having one of these and thus being able to enjoy their favorite Xbox games without having to carry a Bluetooth controller. or Xbox to match to your mobile. And also without having to resort to the touch controls that the company has been adding in various titles.

Because adding touch controls may seem like an interesting solution for certain games, but in most games the screen itself is covered and that reduces the quality of the game experience itself. So, having that gamepad on the second screen is quite striking, although it must also be said that it is nothing new since the LG V50 and its dual-screen accessory already offered this option.

However, we are not going to detract from Microsoft that has made the Surface Duo a much more interesting product even than it already is. So now you know, if you are lucky enough to have a Surface Duo, you will only have to go to the Play Store, download the latest update of the application and enjoy the experience.

Surface Duo, a product as striking as it is exclusive

The Surface Duo, in case you did not know it until now, is a mobile terminal with a double screen that Microsoft launched a long time ago and that despite how striking it is, it is also very exclusive. And not because it is not available to anyone, but. because its equal price is not what many are willing to pay.

Surface Duo costs around 1000 dollars and although it is interesting, its hardware and deficiencies in certain aspects such as the camera make not everyone decide to opt for it. Even so, with updates like this one to the app that gives access to xCloud, some are still thinking about whether or not to give it a try.