The video game industry has become one of the most moving money per year. Therefore, today we can find a large number of companies, studios and even amateur users who are dedicated to bringing their own ideas to life.

Although years ago creating a game was quite a complicated task, since they were either programmed from scratch or you had to have access to very expensive professional software, nowadays anyone, with basic programming knowledge, can create almost professional games thanks to tools and engines, like Unreal Engine , that are available to everyone. 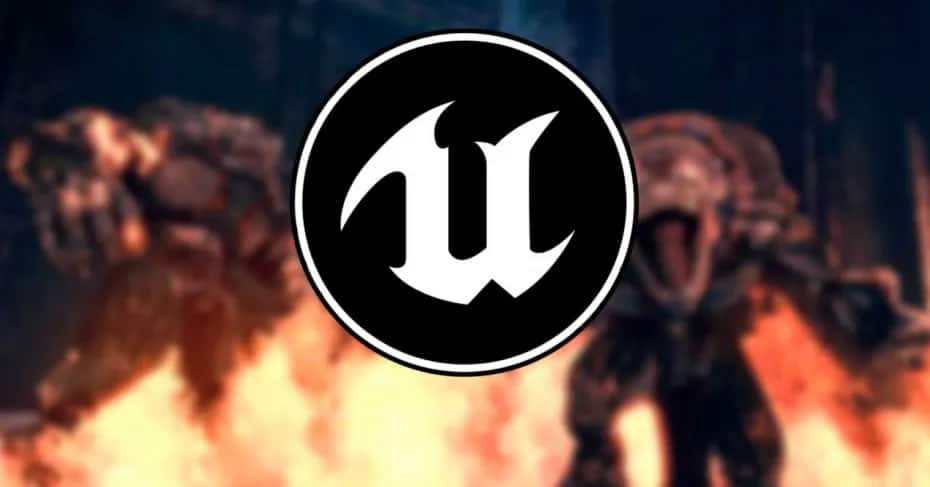 What is Unreal Engine

Unreal Engine is one of the engines to create the most powerful video games that we can find. This engine belongs to the company Epic Games , known for the popular Epic Store and for being the developer of the Unreal Engine and the popular Fortnite.

This engine started its activities in 1998, although it was a paid engine, out of the reach of any hobbyist. Luckily, Epic Games decided in 2015 to change its business model and began offering this engine completely free of charge to any user interested in using it to shape their games.

The compatible platforms for which we can develop games are:

When we go to create a new project, we can choose the type of project, load a template and configure the project parameters according to the platform where it will be executed. 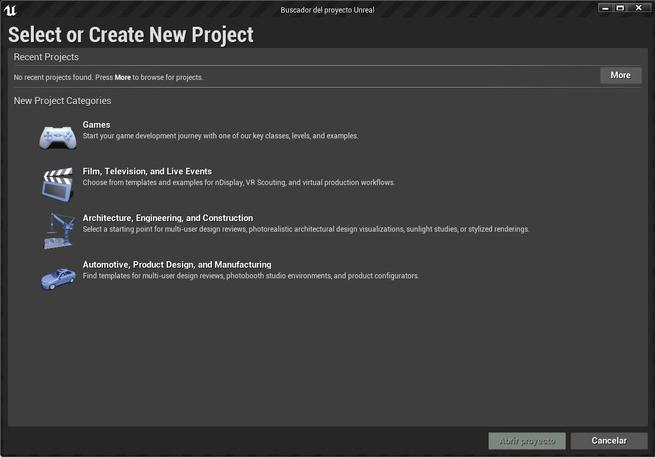 The first version of this engine came in 1998 and debuted in the Unreal and Unreal Tournament games. Despite being a very complete engine (it even had a very advanced AI), it did not become popular until the arrival of the second version.

Unreal Engine 2 arrived in 2002 and did it through the front door, demonstrating its power with the popular game America’s Army. This version improved the physics and was prepared for PS2, Xbox and GameCube. Version 2.5 came soon after, improving performance, adding vehicle physics and a new sound engine.

The third version of this engine, Unreal Engine 3 , came to developers in 2006 with improved support for PC with DirectX 9 and 10, Xbox 360 and PlayStation 3. The games that released this engine were Gears of War and Unreal Tournament 3. This It has been the version that has taken Unreal Engine to its maximum splendor, obtaining use contracts for the major game developers.

The latest version of this engine is Unreal Engine 4 , a version that has been on the market since 2005 and used in hundreds of games, both from large studios and fans. This was the first free version of the engine, encouraging Epic Games to anyone who wants to use it without limitations. The only condition is that the company will take 5% of the benefits of each work once it exceeds $ 3,000.

In addition, Epig Games is already working on Unreal Engine 5 , the next version of its engine designed for the new consoles, PS5 and Xbox Series X, which will undoubtedly revolutionize the video game market with ultra-realistic graphics and performance. This version is scheduled for the end of 2021.

In addition to being an engine for video game development, Unreal Engine also plays an important role in other markets. For example, it is widely used to perform simulations and renderings in architecture, for engineering work , in medicine for operations trials and even in virtual reality. Even this engine is usually used in the cinema to perform all kinds of animations and special effects.

As in everything, there is no perfect product. Therefore, Unreal Engine also has its advantages and disadvantages. One of the advantages of this engine over others is that it is completely open source , so each user or company can improve it and adapt it to their needs. It also stands out for its lighting systems , in the creation of content and materials and in the large amount of documentation it offers so that any user can learn from scratch or answer any questions.

As disadvantages we can highlight is that it has a fairly steep learning curve . This, together with the mandatory use of the C ++ language for the code editor, can leave out many users who do not have knowledge of this language. It also has elements that can be confusing and messy even for the most veteran users. Without forgetting that Unreal Engine has serious performance problems when running mobile games.

Unreal Engine’s main rival is undoubtedly Unity. This engine is also completely free for users and uses a similar business model based on commission based on earnings. Unreal charges everyone 5% of profits above $ 3,000, while Unity leaves its engine completely free (although with some limitations) if the company earns less than $ 100,000. If you have more of that income you have to pay for the PRO version of the program ($ 1,500, or $ 75 a month). And if we make games for Android or iOS, Unity offers additional charges.

The Unity 3D interface has a much less steep learning curve, that is, it is much easier to use. Even if we start from scratch, in a short time we will be able to know which are the most important elements. In the case of Unreal Engine, the interface is much more complicated from the first moment. As for the supported programming languages , Unreal Engine 4 uses C ++, while Unity allows the use of C # or JavaScript, both languages ​​with the same results. On compatibility, Unity 3D is compatible with the same platforms as Unreal Engine, in addition to many others (especially consoles from one or two generations ago). 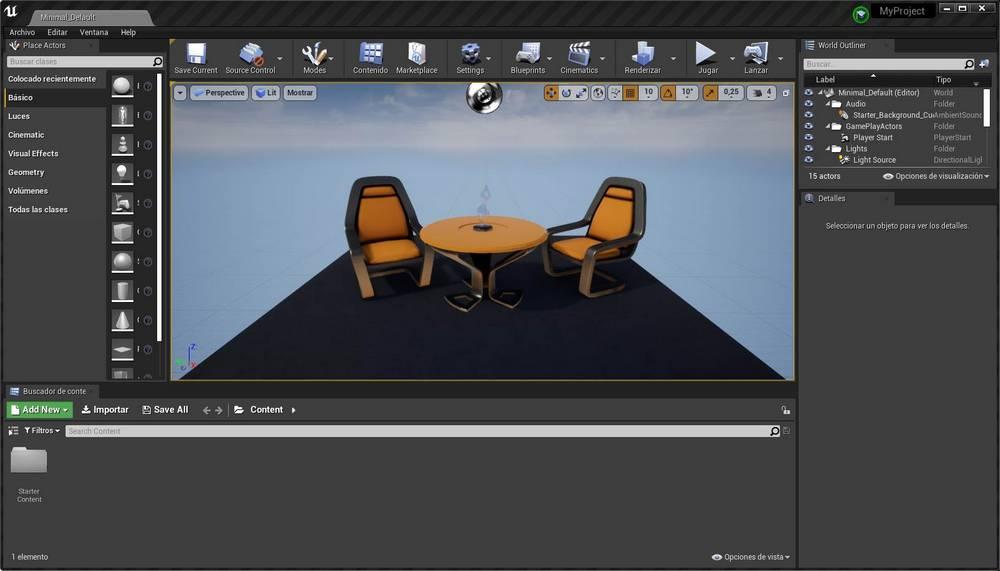 Both engines have their own stores to download resources to use in projects. However, Unity 3D is infinitely superior in terms of their number.

Of course, Unity, having a greater market share, has many more professional opportunities.

What do I need to know to use Unreal Engine

The first thing we need, very important, is time. As we have already explained, the motor learning curve is quite steep. Therefore, we will have to spend a lot of time getting familiar with its interface and all the functions it offers us if we really want to start programming video games with this engine. If possible, we would recommend starting with an Unreal Engine course, even if we already have previous knowledge of other languages ​​or engines, to familiarize ourselves with it. Documentation is an element that we must always have on hand.

In addition, although we can do a lot from the interface of the program, there are things that we must surely program by hand. And the only language that we can use for this purpose is C ++ , since its interpreter does not support other languages. If we do not know how to program in C ++ in the long run we will have problems.

The best way to download this engine, and to be able to control all our projects and always have the latest version, is to do it from the Epic Games launcher . And we must also have a user account to be able to log in and access all the resources offered by this platform.

In the menu on the left we will have to select ” Unreal Engine “, and from here we can download the latest version of the engine to our computer for free. 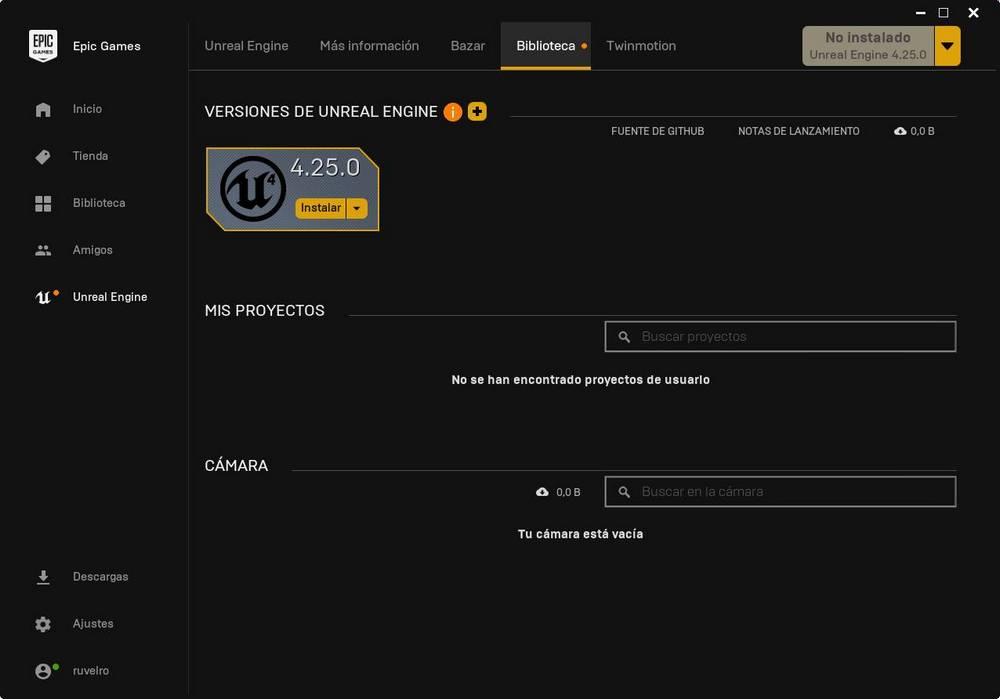 Game development is very sensitive, so it can happen that a specific version of us gives us problems when it didn’t happen before. For this reason, Epic Games also allows us to download the previous versions of the engine, up to 4.0.

Within this same launcher we will also find a list with all the projects we create. So we can always have them at hand and access them when we need it.

Once the Unreal Engine is downloaded and installed, we can open it from the Epic Games launcher. And now we can only begin to make our imagination come true.