Technology has made it possible to create an enormous number of machines throughout history. Many of them have served to help millions of people around the world. From microscopes or cameras to even robots that help many companies and companies to carry out their work, and can even work alongside people. The latest creation reminiscent of a machine from the future is a round-shaped instrument capable of floating small objects using only sound.

This new device allows objects to levitate through acoustics. This could be implemented in various fields such as nanotechnology, pharmacy or biomedical engineering, where it is very important to manipulate objects without coming into contact with them.

The generation of sound waves, key

Currently there is a technology called laser tweezers , which use laser technology to generate pressure and make small pieces float and move.

However, these tweezers are only useful with very small objects. But this new technology created by the Japanese would allow to manipulate other types of materials and of a greater size. 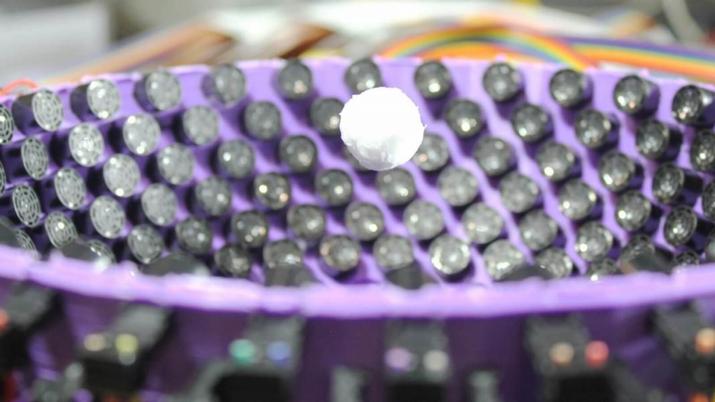 The problem with this system is that it is a very difficult task to control the system that creates the sound. It is easier to create, but it is difficult to control the sound waves so that they lift it up and leave it levitating in the air. Also, if there is a surface that reflects sound, the sound may be less effective.

Luckily, two engineers from the Tokyo Metropolitan University found the key to creating this sound system, being able to lift a small three-millimeter ball and make it levitate.

Still needs to be improved

They managed to find the perfect point to levitate the object by making the sound waves only focus on the tiny ball, and not spread to more places. This is the first time that the levitation of an object has been recorded using this technique.

It was very important to use all the systems as if they were a block, instead of working with each one individually.

However, this technology is not yet 100% reliable and has to undergo further testing in order to be optimized and run at full capacity. There were occasions that the ball instead of floating in a fixed point, it dispersed.

Even so, this device represents progress that has never been seen before and that could be of great help to scientists. There is no doubt that the Japanese team will work very hard to improve the performance of the system and that it can be used in laboratories in the not too distant future.