It is increasingly normal to see how different companies and companies use drones to carry out different jobs and tasks. Drones have many uses and these can be very varied. At first they looked like a mini plane that could be flown and driven, as if it were just a kind of leisure and entertainment activity, but they serve much more. In addition, there are different types of drones that allow the realization of one thing or another. In this case, there is a new use for drones: conducting power line inspections quickly and safely.

Generally this work is done by people who have to climb poles or climb thanks to a crane. This work put the lives of these people at risk. However, now these drones will be able to do this job in a simpler and safer way.

A safer mode of inspection

Drone systems already existed that were in charge of inspecting power lines, but these could not touch the cables during the inspection process.

In addition, it was possible that the electromagnetic fields produced in the power lines could negatively affect the drone’s systems, causing a loss of contact with the person who is controlling it. 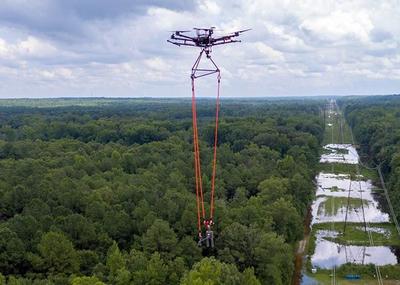 Therefore, a non-conductive payload system has been built for this. This system can be implemented in drones that can lift almost 2.5 kilos of weight.

This system consists of a triangle-shaped frame that is placed next to the landing gear of the drone. There are three cables that hang from the corners of the frame and a tool that is attached to the lower ends of those cables.

A device resistant to electricity

While the drone flies along a power line that is in full operation, the system can be lowered on a regular basis so that it is in direct contact with splices and other connections that may be faulty in the power line, verifying their resistance to electricity.

In addition, it has a release mechanism that allows you to release the system in the event that the drone suffers any type of problem or even when it approaches the ground to make a landing.

This system is not yet available for sale, but it should not take long to be available.

This is not the first safety system for power lines, as not long ago a company created a device that has a series of rubber rollers that travel along the power line.