Streaming platforms have gradually moved away from free trials. Currently only Amazon Prime has a free trial month , while Netflix, Disney + and HBO have long since eliminated it. However, there are still ways to get free subscriptions to these platforms through operators and other promotions. Now, one returns that allows us to get a month of Disney + for free.

To do this, we just have to go on the Xbox panel to the Benefits section, and there we see the Disney + promotion free for 30 days . The promotion can be requested until January 31, 2022, and can be redeemed until February 28, 2022. 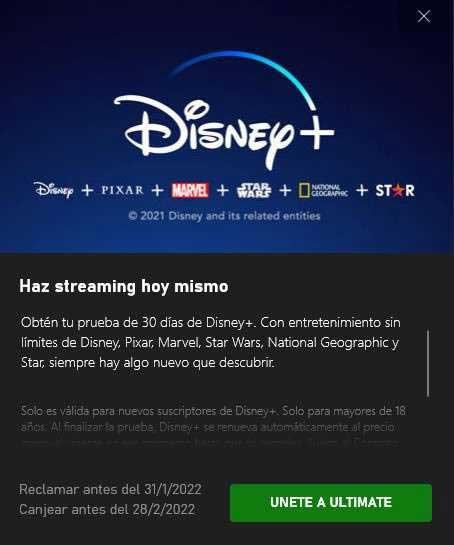 In addition to not having taken advantage of the previous promotion, it is necessary that we are not Disney + subscribers either. If you have already accepted the previous promotion, you will have to create a new account on the streaming platform, as well as it is likely that you will not get benefits on Xbox if you already accepted the one in June.

The Disney + subscription is automatically renewed after 30 days at the price of 8.99 euros per month . If you do not want to renew it, you will have to cancel it in the user panel.

It’s the only way to enjoy Disney + for free

Enjoying Disney + free for a month is something that is within the reach of anyone if we have a PC or console. There is currently a promotion available for Xbox Game Pass Ultimate where the first month is only 1 euro. Thus, we can subscribe to Xbox Game Pass and enjoy its games and Disney + for only 1 euro during the first month. Once the promotional month is over, the subscription goes up in price to 12.99 euros per month. Some old accounts may receive an even better promotion, with 3 months of Xbox Game Pass Ultimate for just 1 euro.

This is the only way there is currently to be able to enjoy Disney + free for a month. If we subscribe to the annual modality, we receive the equivalent of two months free. If we hire a rate from Movistar Fusión Selección Ficción or Fusión Total, we also have Disney + free with Movistar included in the rate.