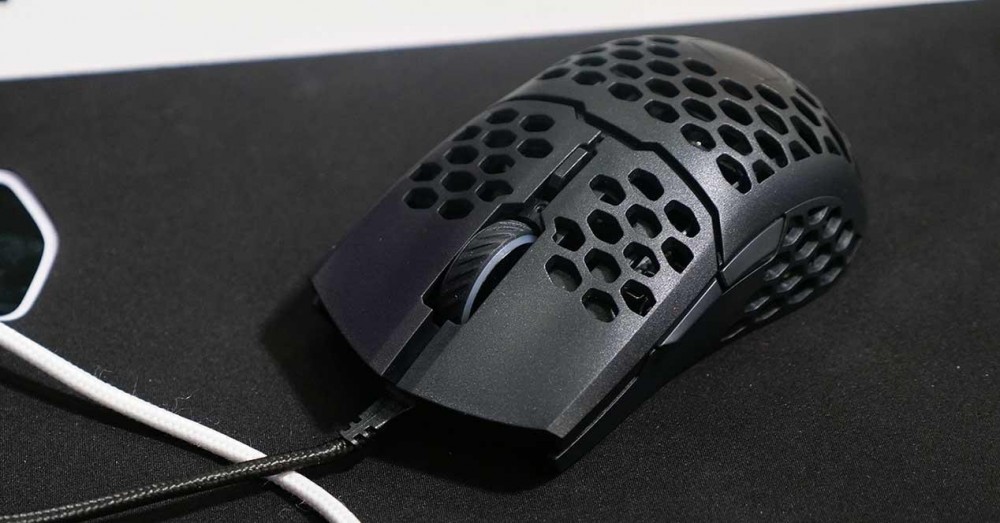 If you are a lover of FPS type games (First Person Shooter, or first person shooter game) you surely know that lighter mice will give you a certain advantage, since their lower weight reduces inertia and therefore you will obtain better precision. when making aggressive movements. Do you want a light mouse for it? Well, in this article we are going to tell you which are the lightest gaming mice on the market that will help you have the best performance.

As a general rule, gaming mice almost always weigh around 100 grams, while many of them even incorporate a customizable system of weights that allows you to add or remove weight to adjust it to the user’s tastes. However, it has been shown that the lower the weight of the mouse, the less inertia you will have when moving it, something especially important in FPS-type games in which very fast and aggressive movements are made to quickly target the enemy, so the lighter be the best performance mouse you can have.

What are the advantages of light mice? 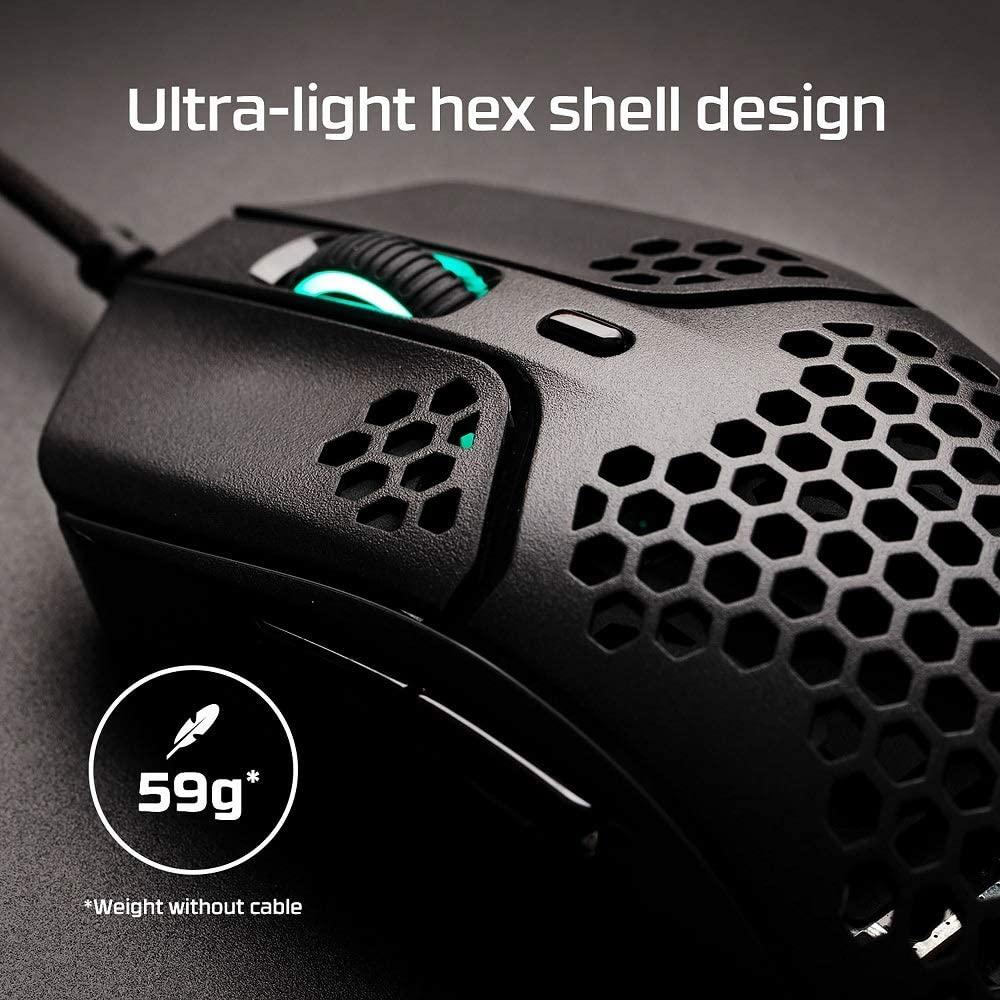 When you make smooth and fluid movements with the mouse and especially if you play with a high sensitivity on its sensor, it is quite likely that either the weight of the device does not matter to you or you even prefer that it be relatively heavy to have better precision, This is why, as we have already mentioned, there are many manufacturers that even incorporate a system of additional weights to make the mouse heavier if you want.

However, when you make very fast and aggressive movements in your games, this weight generates quite significant inertia, some inertia that can cause the mouse to “go away” and not point just where you wanted, in addition to generating greater fatigue since in this type of games usually use lower sensitivities to have a greater precision at the cost of making longer movements.

For this reason, having the lightest mice provides a certain competitive advantage since their lower weight is synonymous with less inertia in movements, so that precision will be greater, neither more nor less, and the proof of this is that they are increasingly more manufacturers that incorporate these mice “with holes” in their catalog for enthusiastic users of FPS games.

The lightest gaming mice on the market

Next we are going to list the lightest gaming mice on the market that can be purchased at this time, always taking into account that they are mice from renowned brands that use good quality sensors and with which you can be sure of their performance. Similarly, we consider light mice to be those that weigh a maximum of 75 grams.

Cooler Master MM710, the lightest mice in the world 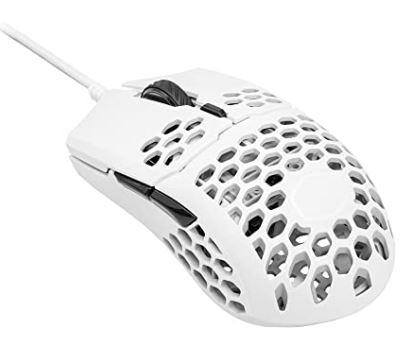 This gaming mouse boasts of having been created to be lightweight, and it seems that they have succeeded because at just 53 grams it is the lightest gaming mouse on the market. Despite that, it has been created with top quality materials that give it resistance and robustness beyond any doubt so that the mouse survives the hardware of your PC and of course the intensity of your games.

It has a PixArt PMW3389 optical sensor of 16,000 DPI that of course are configurable, as well as its six buttons. The sensor is able to withstand aggressive movements of up to 400 inches per second with up to 50g of acceleration, and in this case it has a USB 2.0 connection with braided cable for greater resistance and durability. 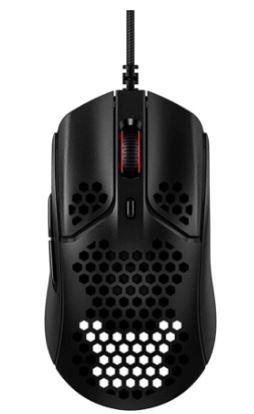 Like the previous one, this mouse has been designed to be as light as possible and in this case HyperX has managed to weigh only 59 grams, ranking second in this ranking. It incorporates a 16,000 DPI PixArt PMW 3335 optical sensor, has six programmable buttons and of course incorporates the manufacturer’s Hyperflex technology so that, despite being connected to the PC via a USB cable, it does not interfere at all with the user’s movements. .

HyperX includes with this mouse a set of replacement PTFE feet, as well as rough stickers for the sides and the two main buttons to improve grip if the user wants. 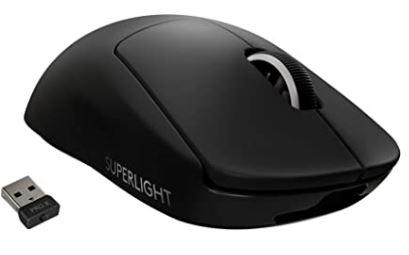 This is the lightest wireless gaming mouse on the market; With only 63 grams of weight, it incorporates a battery with 70 hours of autonomy, and how could it be otherwise in the case of Logitech, it has the award-winning 25,600 DPI HERO 25K sensor with maximum configurable sensitivity, as well as its five configurable buttons so that the user can configure the mouse to their liking.

In this case, the device connects to the PC with wireless technology, which includes a USB receiver, and lacks any lighting to maximize battery life. 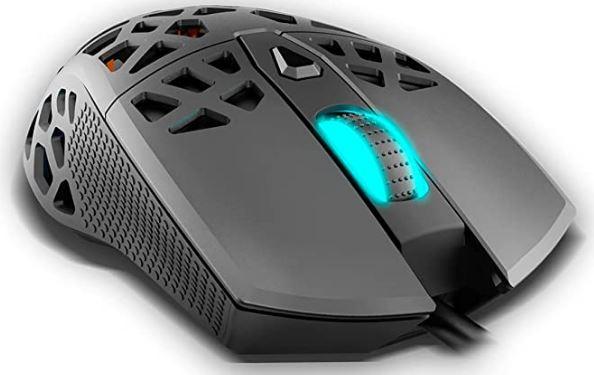 KROM’s lightest mouse is called Kaiyu, and at just 65 grams it has nothing to envy of other much more expensive mice. Equipped with a PixArt PWM3327 sensor with up to 12,000 DPI configurable in jumps from at least 800 DPI, this mouse guarantees the best performance in FPS-type games and, in addition, with RGB lighting that stands out through its paneled surface. 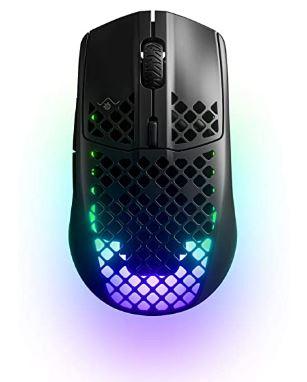 SteelSeries also has its light gaming mice, and among them stands out this Aerox 3 Wireless that even being wireless only weighs 66 grams. It stands out for the incorporation of the award-winning TrueMove sensor with up to 18,000 DPI with 1: 1 tracking, ideal for maximum precision in first-person shooter games.

It also highlights its RGB lighting and battery life of up to 200 hours (as long as the lighting is turned off, of course). Both the lighting and its six buttons can be configured using the brand’s software, SteelSeries Engine. 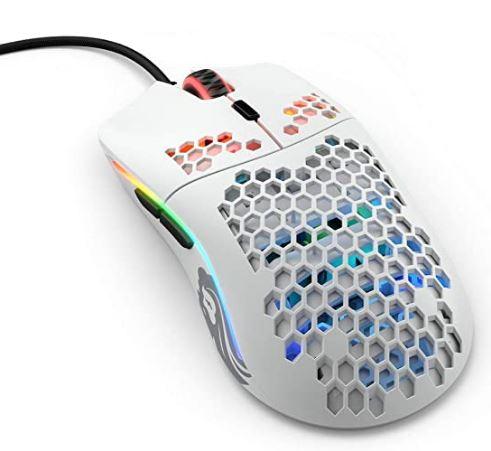 This is a manufacturer that has always prided itself on providing maximum performance, leaving aside other factors such as aesthetics; For this reason, this Model O has the usual paneled design but they have not dispensed with the RGB lighting to make it stand out wherever you take it.

It incorporates a PixArt PWM 3360 sensor of up to 12,000 DPI that supports accelerations of up to 50G, has integrated super-slippery Teflon feet and weighs only 67 grams to avoid those inertias we were talking about at the beginning. 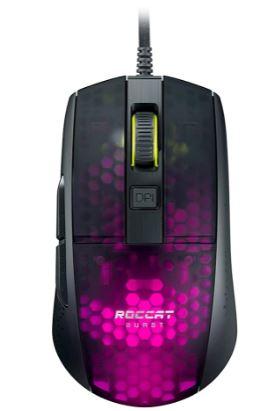 The Roccat Burst Pro is a mouse in which they have combined performance, aesthetics and of course lightness, since it only weighs 68 grams. It has a Roccat Owl-Eye optical sensor (based on the PixArt PMW 3389 but customized) of up to 16,000 DPI, AIMO configurable RGB LED lighting that is quite impressive thanks to the inclusion of translucent plastic panels in its design, and its award-winning Titan High durability switch that has little to envy to the famous OMRON switches.

This mouse connects to the PC via a USB 2.0 cable, but Roccat has optimized the cable (they call it PhantomFlex) to give the user almost the feel of a wireless mouse. 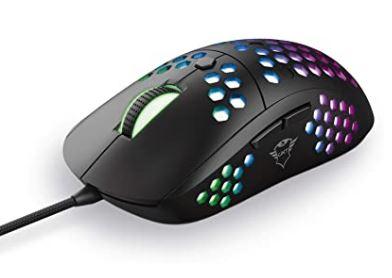 We reach the end of this list with the lightest member of the Trust catalog, the GXT 960 Graphin that weighs 74 grams. With a paneled design and a high-precision optical sensor configurable up to 10,000 DPI sensitivity, this is one of the cheapest lightweight gaming mice that can be found and that does not mean that it is bad at all, since the performance for gaming is more than guaranteed.