The laptops of the LG Gram range bet on thinness, lightness and performance, but they do so at prohibitive prices that take them out of the market for most users, according to data from one of the main consultancies. Next we analyze the sale of laptops in Spain where HP and Lenovo are at their ease and the rest of the manufacturers try to gain a foothold in a competitive market.

LG has been betting on its new range of lightweight laptops in Spain for a long time, but for now consumers are turning their backs on it, as happened with their mobile phones. This is confirmed after having had access to the laptop sales figures between January and July 2021 in which LG does not appear anywhere, highlighting the resounding failure of its reference laptop. If it continues down this path, the firm’s computer division faces the same black future that ended up closing its mobile business.

The premium range of laptops is very well controlled by HP, Lenovo and of course Apple that has its unconditional audience. The rest of the brands have it difficult or impossible to penetrate this market with few exceptions such as Asus or Dell in certain product ranges. To do this, we are going to know the sales figures for the first half of the year.

Laptop sales speak clearly of the market situation in the last 6 months. The great dominator is HP, which remains with a 52.40% market share, slightly increasing its records from the same period of the previous year. The second position is for Lenovo with 27.8% of the market, although the firm falls somewhat compared to what was harvested in the first six months of 2020 precisely due to the stock problems that derive from the shortage of semiconductors. This situation could continue in the coming months as the economy reactivates and demand for chips continues to increase. 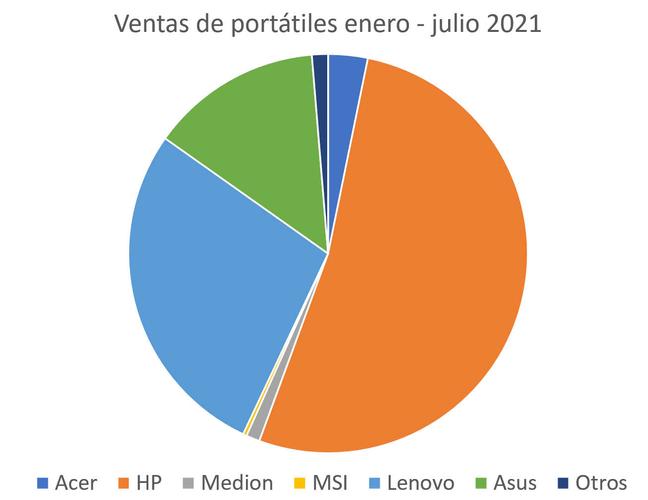 The third position is for Asus with 13.9% and there the list of brands with a significant presence closes. The rest of the cake is for Acer, Medion or MSI. If we look at the previous graph, LG would be considered within that pyrrhic 1.3% of market share that brings together dozens of manufacturers and where despite the efforts at the marketing level by the company, the results do not accompany.

A high-end laptop without Windows 11?

When you make an investment of more than 1,600 euros in a laptop you expect several things. The first is performance, the second is good technical service, and the third is being able to use it for many years. That will not happen with the LG Gram since it could even be without the possibility of updating to Windows 11 when it is available according to the colleagues .

Microsoft‘s brand new operating system will leave thousands of computers behind, but always talking about models with many years and low ranges. Almost no computer purchased in 2020 or 2021 will be left without updating as it meets the minimum requirements of Windows 11.

The problem is that Intel does not include Trusted Execution in its G series portable CPUs, better known as TPM, basic to have Windows 11. The Intel Core i7-1165G7 processor of the LG Gram does not meet these conditions and, except for a last minute miracle , they will be unable to update to the latest operating system in a few months.

Another segment that we have been able to learn about is the “detachables”, a product range that is in full growth. In this case, Microsoft holds the lead with Surface with about 70% share while the remaining 30% is in the hands of Lenovo. It is clear that the brands that focus on a certain niche are the ones that end up succeeding. On the contrary, brands that try to cover too many product ranges end up closing divisions as happened to LG with its mobiles or Samsung with its old range of laptops.