The more arduous the tasks you perform on your PC, the more work you will demand from the processor and therefore the more it will heat up and the more energy it will consume. However, if you do not need all the power of your processor there is a technique called undervolting (which is precisely the antonym of overclocking) which consists of reducing the voltage and power of your CPU so that it heats up and consumes less . If this interests you, in this article we are going to teach you how to do it using the free Throttlestop tool.

In this world of hardware we are almost always looking for maximum performance, but unfortunately higher performance is usually synonymous with higher operating temperatures and higher energy consumption. However, not everyone needs to always get the most out of their processor, and for whatever reason you may prefer it to run at a lower temperature and consume less. For all these users there is the undervolt, a technique by which the voltage and speed of the processor are reduced, but in addition to being relatively dangerous (it does not usually damage anything unlike overclocking, but it can cause instability in the system) it is not easy to perform. However, with programs like Throttlestop you will see below that you can do it on your processor in the blink of an eye, and also in a fairly safe way.

Throttlestop, the free tool to undervolt your CPU

Throttlestop is a tool that you can download and install for free on your PC. Its purpose is multiple (that is, it is designed for several purposes), and although its name suggests that it is precisely designed to eliminate the throttling protection in the processor to obtain better performance at the expense of temperature, in this article we are going to teach you to do just the opposite. 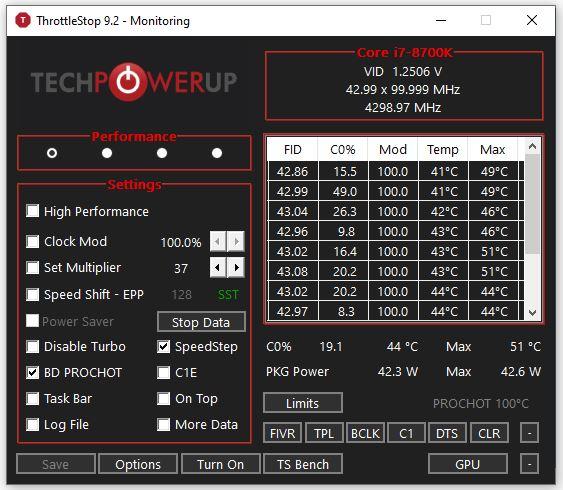 In the main screen that appears after opening it (after accepting a warning message telling us that our processor is at risk if we are not careful) we already find multiple options with which to “play”:

How to undervolt your processor

At the top you can see that there are four selections under the heading “Performance”, and this is where you can choose between different profiles, each with its own undervolt configuration: performance (by default), Game, Internet and Battery. You can select any of them to modify it, and in this case we are going to use the second profile, Game. 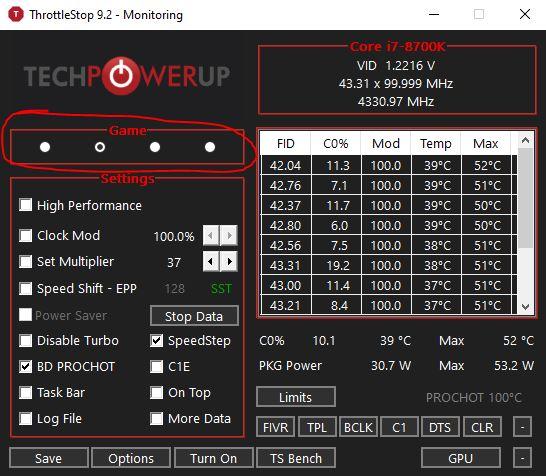 Once you have the profile you want to modify selected, click on the FIVR button that appears in the lower central area. A new window will open, in which you will have to activate the “Unlock Adjustable Voltage” feature. 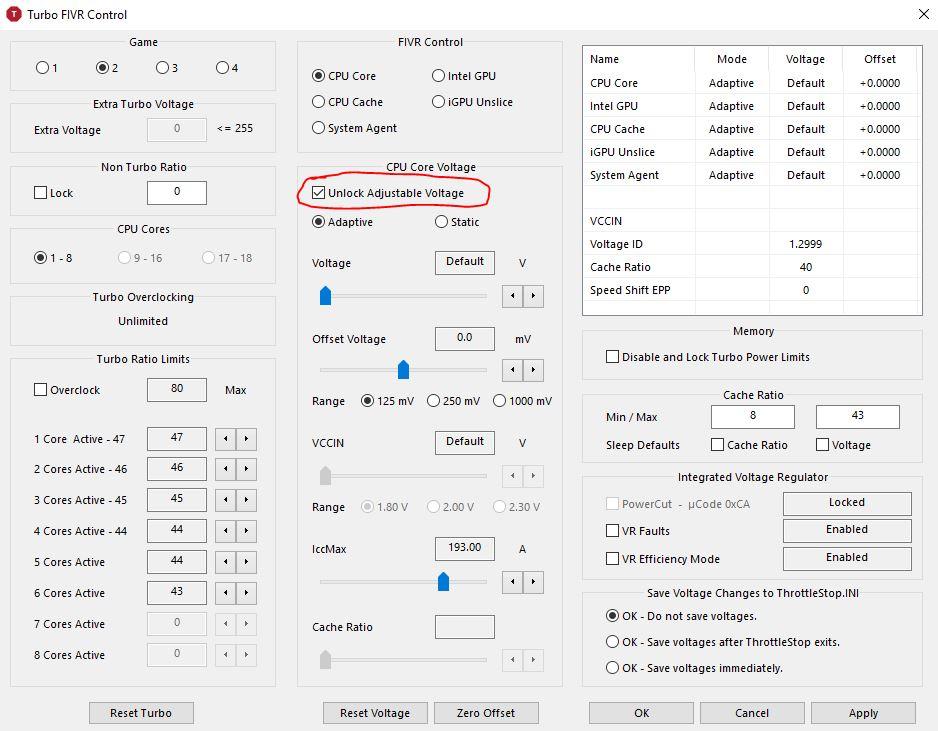 Now you can modify the slider bar titled “Voltage Offset”, which is the one that interests us to do undervolting. To begin with, we recommend putting -100mV (or a close value) to check the stability of the system. 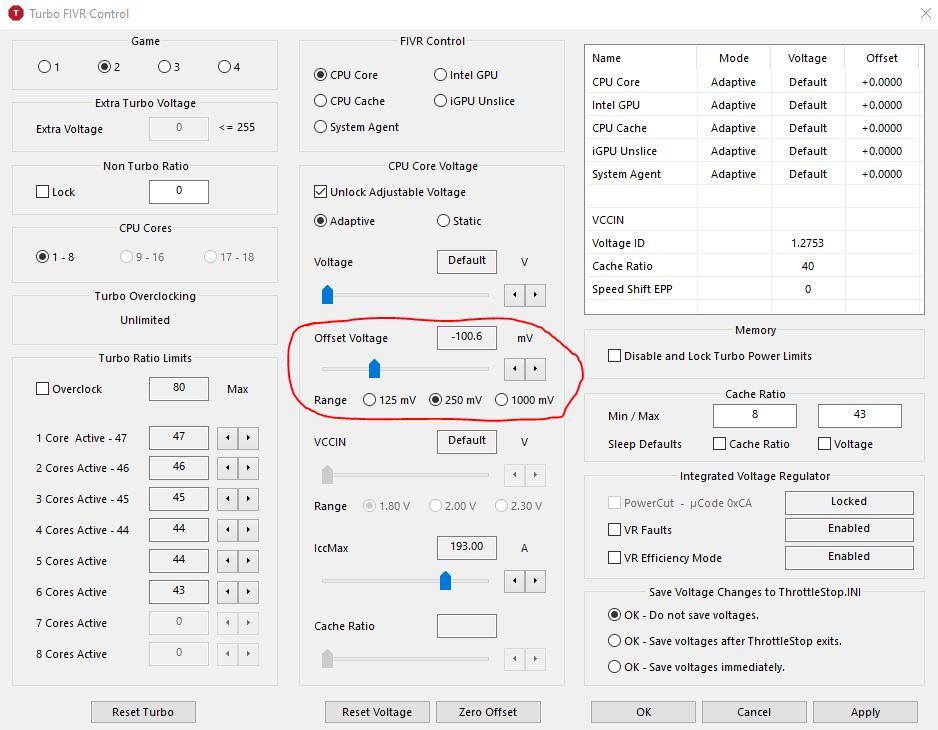 Now comes an important part, and that is to select at the top (titled FIVR Control) CPU Cache and do the same operation: we must put the same voltage that we have put here. 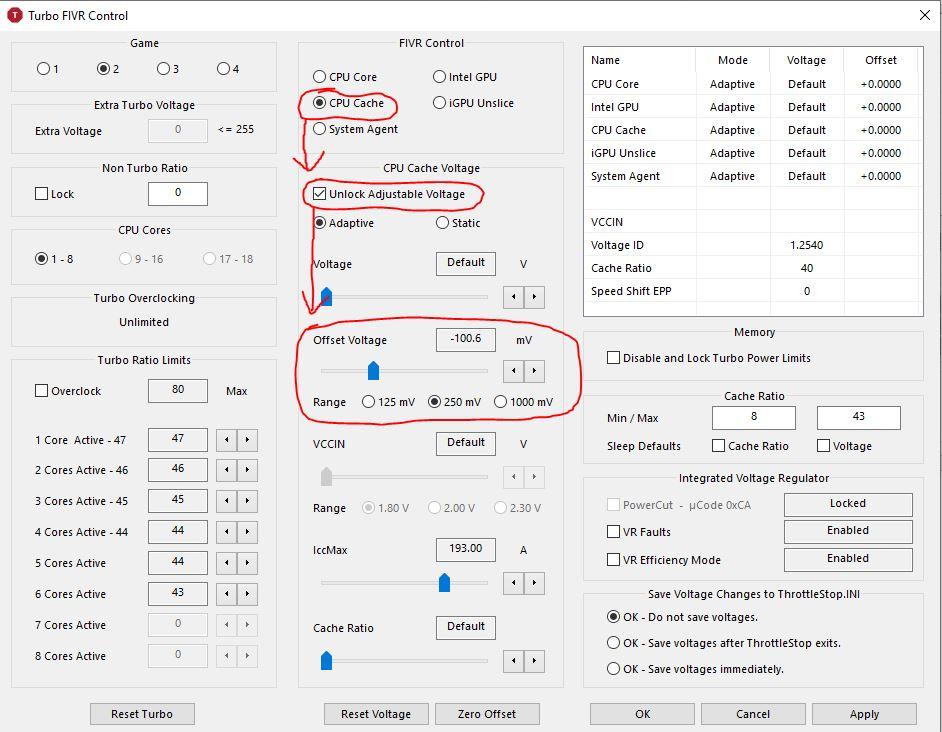 Once these modifications have been made, click on the Apply button located at the bottom right of the window, and from there you can proceed to monitor the temperatures of your processor (you can do it from Throttlestop in the previous window, for example).

If your system remains stable (without BSOD or errors) then you can repeat the operation again reducing this Offset Voltage even more, but from here we recommend doing it in smaller jumps (we recommend -10 mV in -10 mV) and, remember , both in CPU Core and CPU Cache. If the system is not stable after these changes, increase the voltage a little, also in steps of +10 mV each time.

Every CPU is a world when it comes to overclocking and undervolting, and not all processors support the same levels of undervolt. In our case, with a Core i7-8700K we managed to reduce the voltage by -150 mV with everything 100% stable, but it doesn’t have to be your case.

Once you have finished making the changes you consider appropriate, simply click OK in the Turbo FIVR Control window and then click on the “Turn On” button in ThrottleStop. 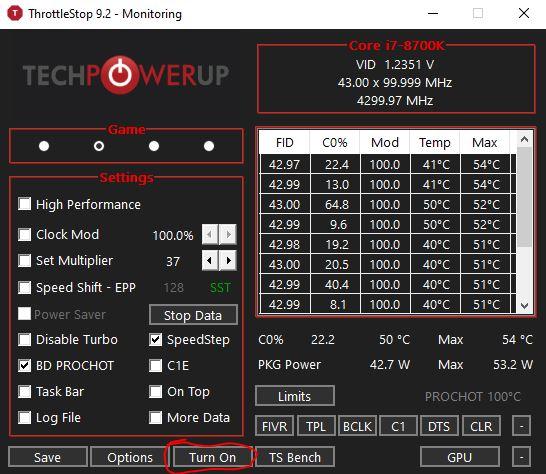 The bad part about Throttlestop is that these changes will only apply when you have the application open. If you want them to be applied automatically every time you turn on your computer, you can add it to Windows automatic startup or to scheduled system tasks so that it starts every time you start Windows.