With the arrival of Android 12, smartphones have taken a 360-degree turn in the world’s most popular operating system. Although it was still recognizable by the many customization options it offered us, Android had somewhat ceased to be what it was. Until now, if we wanted a somewhat more current and renewed design, we had to think about applications, launchers and other extras.

But all this has changed with the integration of Material You, the new design style created by Google for Android 12 . A series of modifications that are applied throughout the system and that are not individualized to a single section. In this way, with a few simple touches, we will be able to do everything we want on our mobile. What until now the themes of Xiaomi or Huawei offered, is here to stay on the Android scene. 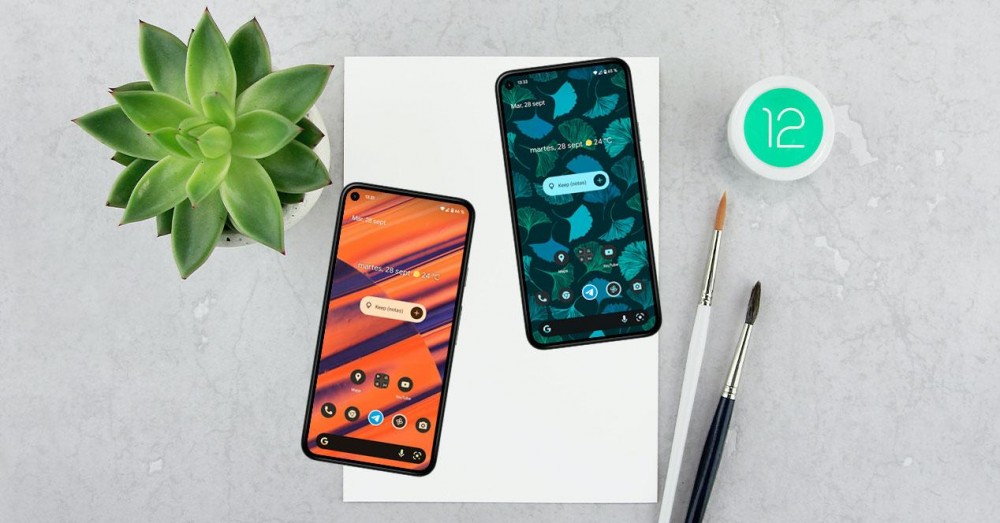 To begin to know everything that the image redesign in Android entails, we have to look at everything that we are going to be able to change on smartphones with this version point by point. The first thing that stands out is that the icons have undergone a complete change, at least whenever we want to. Once our mobile is updated with Android 12 or if we launch a mobile with Android 12, we will not see any changes and what’s more, the icons will remain the same, but things change once we follow the process that we are going to show you:

From this section we are going to be able to activate it and allow all the modifications that we make to the themes of our mobile phone to be reflected in the smartphone’s own shortcuts. With this we achieve a totally differential aesthetic that was previously much more complicated to achieve and did not keep the design lines created in the system.

As we show you in the images, with this we are going to make our mobile go from being full of colors to keeping a concordance, where all the icons (optimized) have the same color or colors. However, at the moment only the Google application icons have been adapted to allow this change, although developers can already work on it. For now, the ones that adapt are the following and the rest will come little by little:

However, these modifications to the icons by the theme are not applied in the application drawer, where we will continue to see all the apps with their own colors. They are only applied once they are placed on the home screen as a shortcut.

One of the biggest changes that we find within the Android 12 styles panel itself is based on color. Previously this option did not even exist and now it is the one that will provide us with the option that we have seen before to choose a single tone or a varied one in the shortcuts. Modifying it is as simple as entering this section again and choosing between the two existing categories of colors. 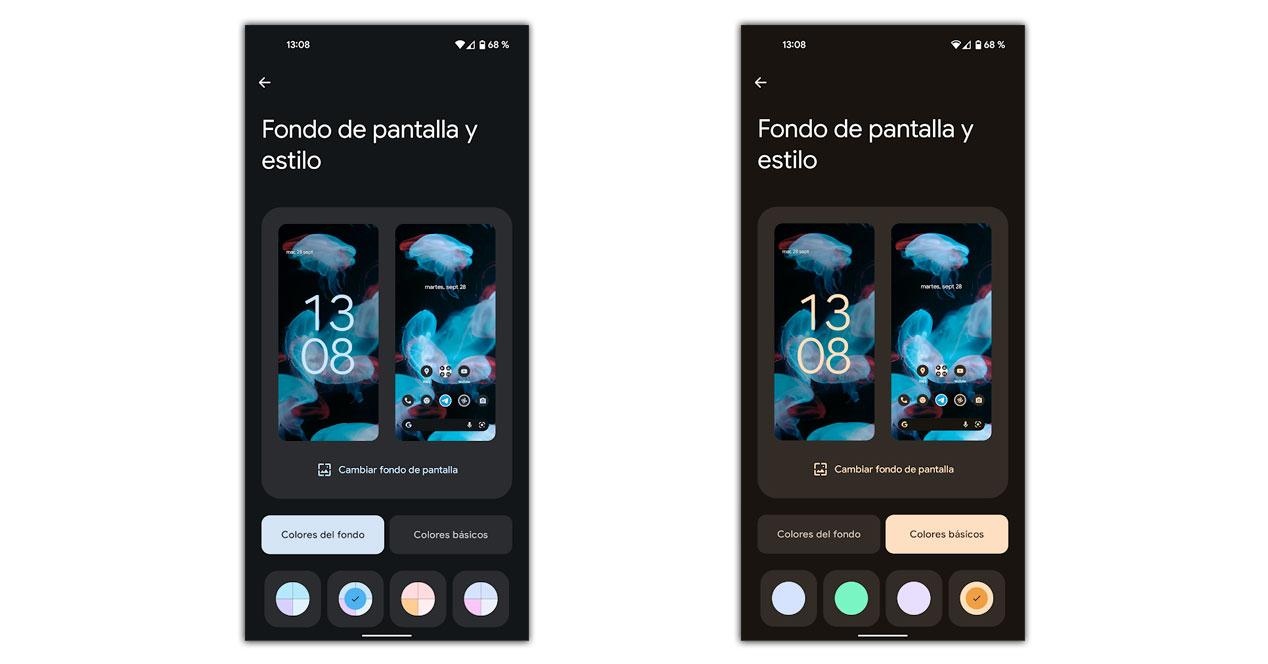 But the color changes will not only affect the icons as we have already seen or shown in those preliminary screens in the options, but also the colors will be applied to other aspects as prominent as the widgets and some applications (redesigned to Android 12). The colors sneak into the volume control to keep concordance and in the control panel where we have the shortcuts.

The settings also receive a tonality of the theme , although without being such a prominent color and of course on the lock screen. If you usually consult Google Discover, you will also notice the difference and even the color change is applied to the keyboard without you having to do anything other than use Gboard in its latest available version. 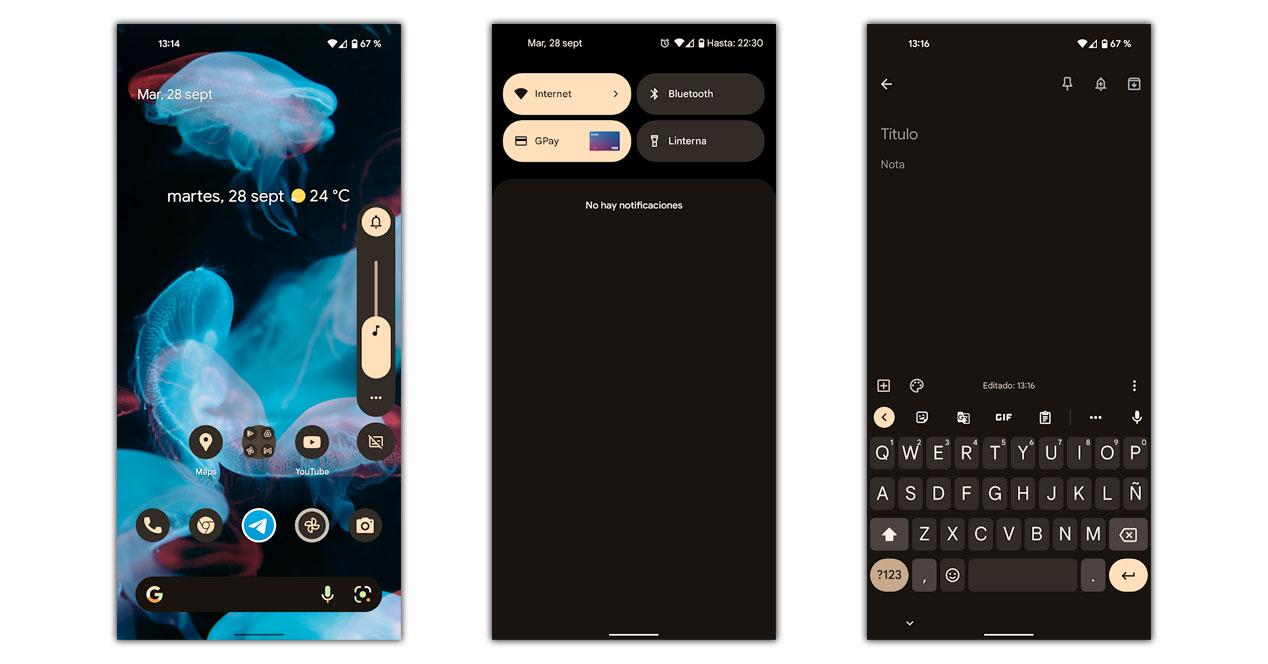 A total adaptation of the colors of the system to the entire smartphone, so that at no time we notice that something squeaks at us. We trust that these modifications will not remain here and each time the integration of the pains goes to more, being part even of other applications that are not from Google, which would be a real marvel.

What about fonts in Android 12?

Although it was expected that the options would multiply in order to enjoy the possibility of modifying the text style, this has not happened. For now we can only see the color change when modifying it in the themes as we have seen previously, but there are no major changes. Regarding the size of the text, we still have the native option within Settings> Font size, to choose if we want a larger or smaller text. 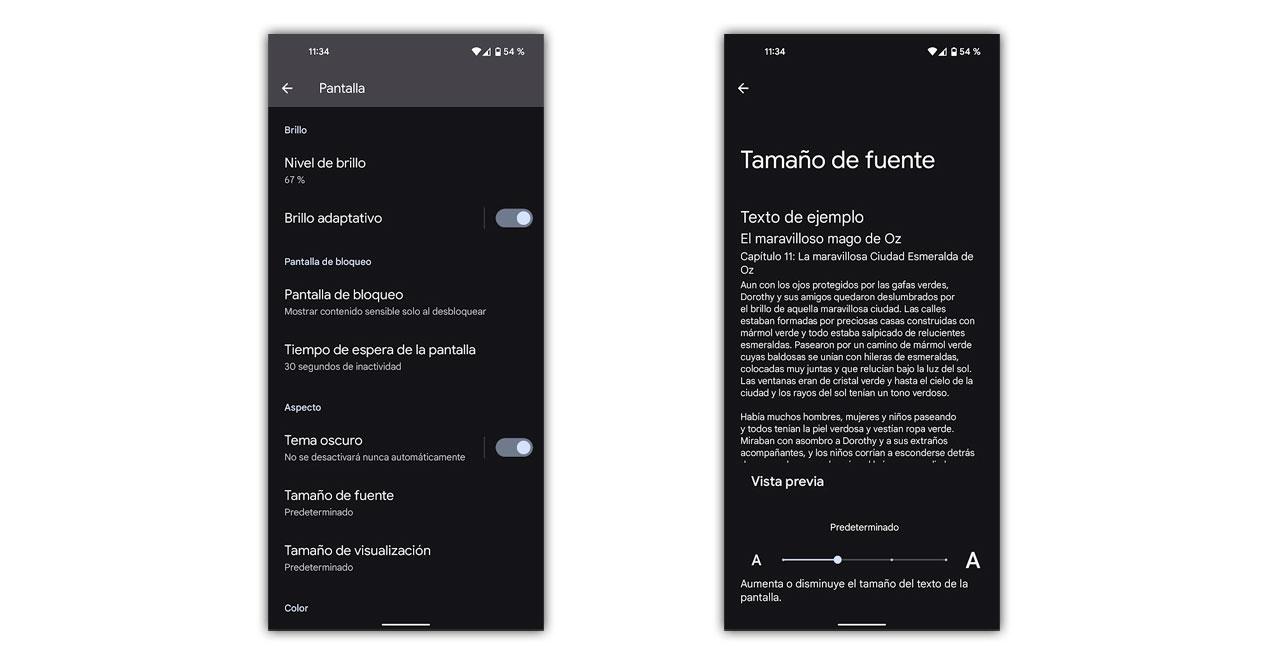 Two sections that remain for the end and that however can also be very important when customizing a mobile with Android 12 . Its changes are minor, since the dark theme or dark mode has ended up imposing on the light theme for its advantages what is entered within the theme options. A color effect that has a presence throughout the system like accent color. 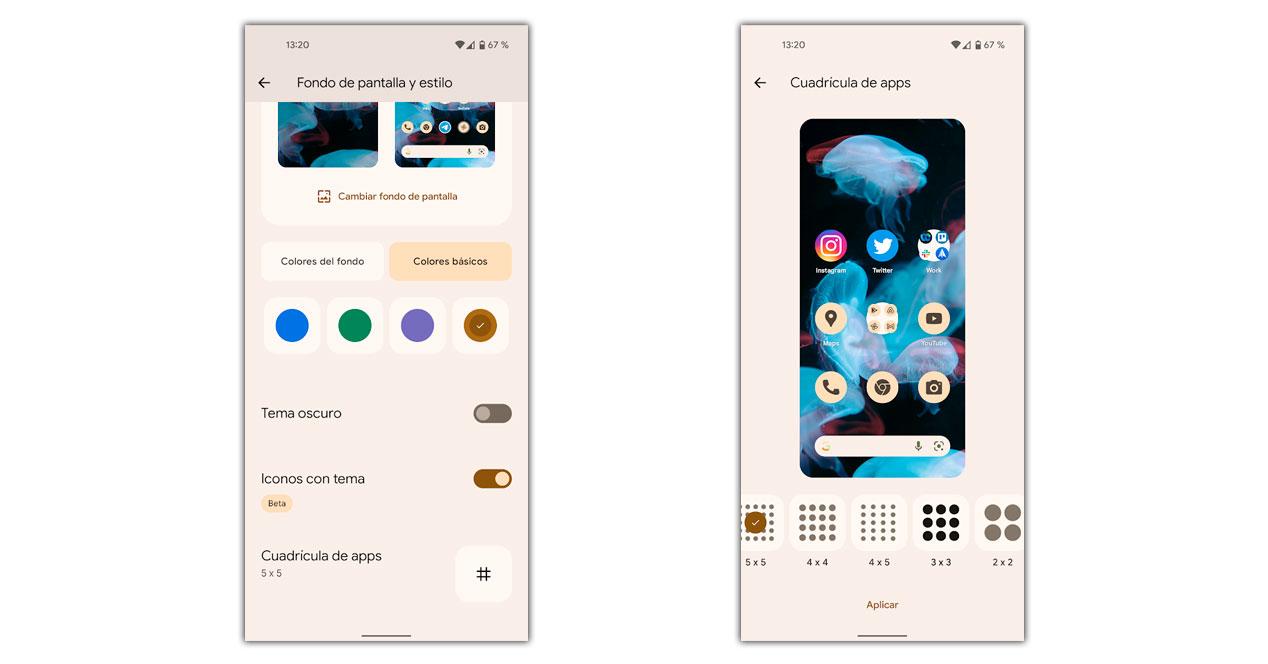 And a grid where we have the option of adapting the icons on the screen completely to our liking or need. We will choose options ranging from 5 x 5 to 2 x 2.

What mobiles can use the Android 12 themes?

Although we would like to be able to say in the future that any smartphone with Android 12 has access to color themes, at the moment it is only available on smartphones that use Android Stock and more specifically the Google Pixel. We will see if over time this adaptation is imposed and other manufacturers adapt their layers so that we can choose the color of the system with greater freedom and then be able to say without fear that Android offers the greatest options in customization.