Despite its enormous use at the moment, one of the most criticized points of the current Internet browsers is its high consumption of resources. This is something that is especially evident in the two most used alternatives of this type, Chrome and Firefox.

Of course, this high consumption of CPU or RAM , slows down, or can even block the rest of applications in Windows 10. In addition to the aforementioned browsers, this high use of the CPU or RAM can be caused by many other applications and processes With everything and with it, in these lines we will focus on one of the proposals mentioned, Mozilla Firefox .

Therefore, in the event that our Windows 10 system shows a high CPU usage due to the Firefox process, then we will help you solve it. Especially in somewhat older equipment, this is something that can affect the rest of installed programs, or the operating system itself, so we must take action on the matter. It should be mentioned that in recent years many have complained about the performance of the other great browser , that of Google . On the one hand many warn that it consumes too much RAM, while other users complain that Chrome takes too long to open .

In the same way, this high consumption in Firefox can come caused by several things among which we can mention the extensions, an acceleration of defective hardware, for damaged content, too many open processes, or because we have enough RAM in the system.

Of course, first of all the first thing we recommend is to update Firefox to the latest stable version available that Mozilla has launched. Therefore, if in the Task Manager we observe that the Firefox process is consuming a lot, we can eliminate it and restart it.

This is something we achieve by clicking on it in the Task Manager with the right button, and selecting End Task. Then we can run Firefox again, which will reopen the tabs of the previous session.

It can also be the case that the themes and extensions that we use so much in Firefox, consume many system resources even if they are not doing anything. So, to know which one is consuming so much, we can restart Firefox in Safe Mode and check the use of the system in the Task Manager.

In the same way we can disable unverified or too heavy extensions by typing “about: addons” in the address bar . Then we right click and select Disable for heavier or unverified extensions. To finish we have to restart Firefox and we will see how the consumption of resources is reduced considerably, since this is a fairly common problem.

Changing third, another recommendation is to update the drivers of the graphics card of the equipment. Keep in mind that the graphics card driver helps run graphic content in Firefox, we talk about content such as videos or games. In case this driver is outdated, we may encounter some problems such as high resource consumption.

To do this, we only have to use the “Win + R” key combination to open the Run window, where we write the devmgmt.msc command. Press Enter to open the Device Manager and place ourselves in the corresponding screen adapters. Therefore, by clicking with the right mouse button on them, we will see the option to update the driver. 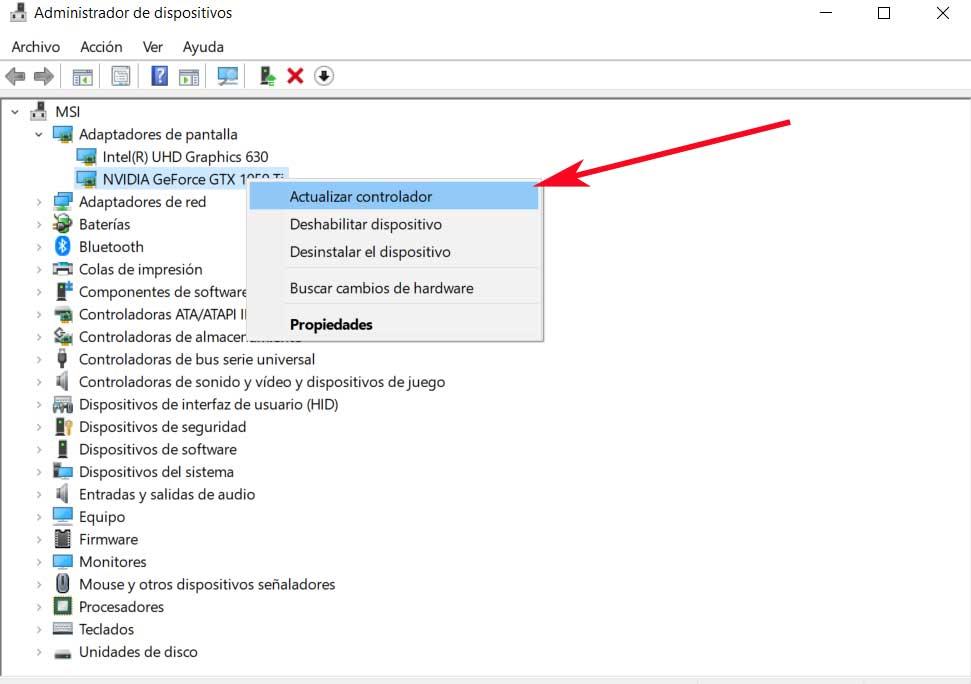 Another important aspect to take into account in this same sense, is that we should stop the downloads of very large files and close the web pages with many multimedia content. It should be known that Firefox is not a heavy browser in itself, however, the use of system hardware depends on the processes that run through it. Therefore it is advisable to stop downloads of large files where appropriate, and close heavy websites. This is something that will undoubtedly reduce the burden on the system and its consumption of resources. To say that we will notice that it is especially palpable on the websites of online games , or those of streaming video type Netflix or YouTube .

Similarly, when we see that the program consumes too much RAM or CPU, we can also opt to activate hardware acceleration. This is an element that controls memory usage when intensive graphic content is run in Firefox. Therefore, it is recommended that we ensure that the hardware acceleration option is enabled in the software configuration. This is something we achieve in the section called Use performance settings recommended in the program in the Firefox Options section. 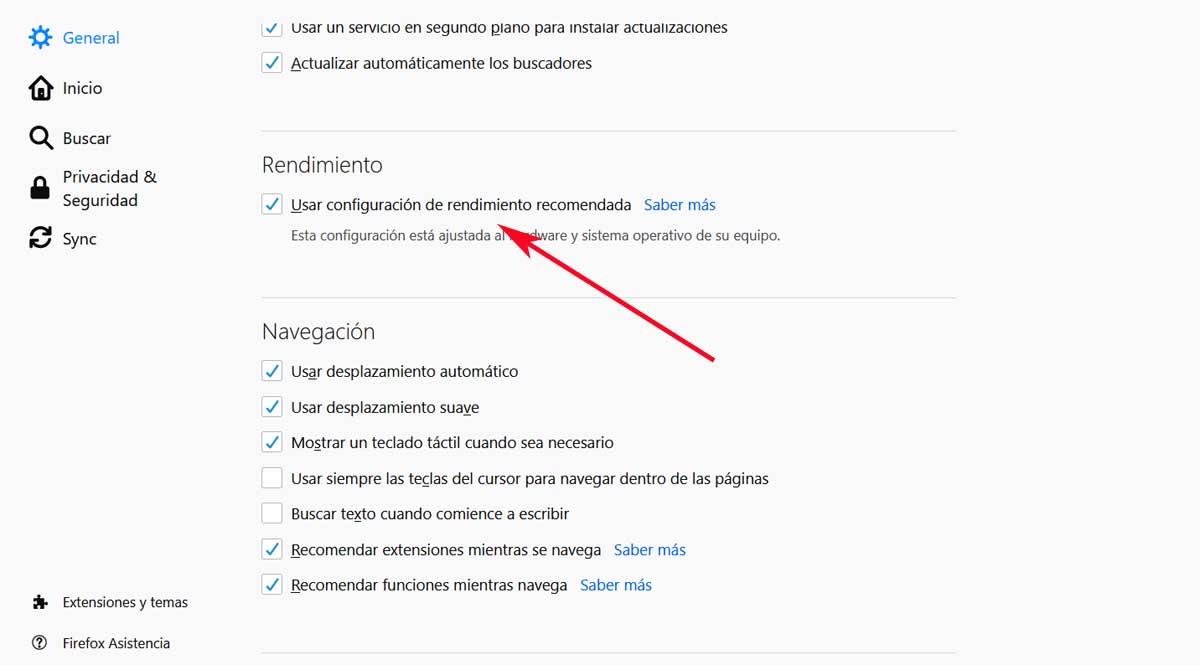 Changing third, say that one of the main causes of Firefox causing a high consumption of resources, is the corruption of a file called prefs.sqlite. Therefore the best we can do is eliminate it. This is something we can do by typing about: support in the Firefox address bar, where we open the Troubleshooting Information page.

Thus, in Basic configuration of the application, we find one of the options called Profile folder, where we also see a button called Open folder. Once we are in it, we can delete the file to which we refer.

To say that these are the main tips that, in one way or another, will solve the high resource consumption of Firefox. This is something that is becoming common for many of today’s browsers . The main reason for all this is that, due to their enormous use, they do not stop growing in terms of functionality, not to mention the additions that we add, such as extensions.