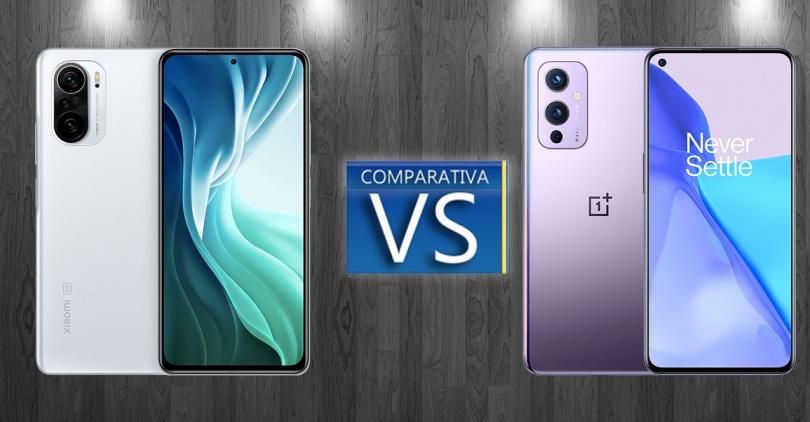 At the top of the OnePlus catalog we have the OnePlus 9 Pro and its equivalent, cheaper and with a flat screen, in the form of OnePlus 9 . To find the smartphone competitor within Xiaomi‘s offer, we must look at one of the models launched very recently on the market, the Mi 11i.

The two smartphones have been developed by Chinese manufacturers with the idea of offering a smartphone without a curved screen, but which can boast the same power virtues as their older brothers. This means that between the two mobiles there are quite a few similarities although, more important than the similarities, are the differences. More similar between Xiaomi and OnePlus than it seems

It is easy to find great similarities between both mobiles beyond the price range in which they are put on sale because, if the two smartphones coincide in something, it is in being a version of the top of the range of the family where they bet on the screen flat instead of a curved display, so loved by some as hated by others. Precisely these two panels maintain the same aspect ratio of 20: 9, with FullHD + resolution, a refresh rate of 120 Hz and some technologies such as compatibility with HDR 10+ and a hole for the camera although, yes, it is located in places different.

Where there is full equality is in the processor chosen to provide power and 5G connectivity to the sets. The Xiaomi Mi 11i and the OnePlus 9 arrive in stores boasting the best processor manufactured by Qualcomm, a Snapdragon 888 manufactured in 5nm with 8 cores distributed in 1 x 2.84 GHz Kyro 680, 3 x 2.42 GHz Kyro 680 and 4 x 1.80 GHz Kyro 680. In addition, the two phones have the same GPU, an Adreno 660, and identical storage options, 128 or 256 GB. Precisely the result of using this processor we find other similarities between the two smartphones, such as compatibility with 5G networks, Bluetooth 5.2 and NFC connectivity. We also have a USB Type C port, a fingerprint sensor under the screen and the absence of the 3.5 mm minijack connector to plug in the headphones.

The 2 phones, either the OnePlus or the high-end Xiaomi have three cameras on the back that can record video in 8K but beyond this coincidence, their sensors are very different. The same does not happen with its sound component, since telephones have a stereo speaker system.

Differences between the Mi 11i and the OnePlus 9

As you can see, there are more similarities between the Xiaomi Mi 11i and the OnePlus 9 than could be expected at first, but the mobiles present as many similarities as differences.

The camera is the main distinction between the two phones, where Xiaomi draws attention with a 108 MP main sensor. But dry smartphones, although with a similar battery capacity, they offer very different charging technologies. The same thing happens if we look at the RAM memory configuration, the design of its screens and, one of the keys, the software that each brand uses in its devices. The two phones use AMOLED technology to bring their screens to life, but OnePlus bets on Fluid AMOLED and Xiaomi on Super AMOLED. There is not an abysmal difference between the two systems, at least n as much as in its size since the first one opts for a somewhat smaller panel, 6.55 inches, compared to the 6.67 inches of the Mi 11i.

We have already said that the two smartphones have the same storage options, but this is not something that is replicated when we look at RAM. The OnePlus 9 is sold with 8 GB or 12 GB but we can only buy the Xiaomi Mi 11i with 8 GB. Best of all, despite these differences, both models have state-of-the-art LPDDR5 memory chips, which offers greater data processing speed.

The greater variety of models means adding a new point for the OnePlus phone.

We land at the great point that the choice of a phone or another can decide, although it never hurts to remember that megapixels are not everything when looking at one camera or another.

The Mi 11i is equipped with professional-level photography capabilities driven by a camera matrix composed of a 108MP main camera, a 119º and 8 MP ultra-wide angle camera and a telemacro camera with a focal length equivalent to 50 mm and a resolution 5 MP. In return, the OnePlus 9 opts for a 48 MP main sensor, but complementing it with a 50 PMP ultra-wide-angle latest-generation sensor and the now classic 2 MP monochrome sensor. To the option of OnePlus we must add the premiere of the association with Hasselblad, not at the hardware level, but software with different shooting modes focused on offering a higher professional quality.

Batteries of different capacity and charge

Although they have very similar capacities, around 4500 mAh, here OnePlus once again takes the “cat into the water” thanks to its 65W fast charging technology, which doubles that offered by Xiaomi and its 33W. In terms of speed, the former promises to fully recharge the cell in 29 minutes, while the latter is closer to 60 minutes.

In addition, it must be added that the OnePlus 9 has 15W wireless fast charging allowing us to forget about the cables when charging the device although, yes, a wireless charger is not included in the mobile package so you will have to go through box if you want to take advantage of this feature.

The two smartphones work with Android 11 but one does it on MIUI 12 and the other on OxygenOS 11.

Here the personal appreciation of each comes into play, but on our site we have always liked the OnePlus operating system much more because it is somewhat less intensive, more like a pure Android version and its many customization options, ranging from the configuration of the Always On, even the icons, through the different screen tones or the powerful photo editor.

In addition, we cannot forget that, not we, but Xiaomi fans themselves, are not finishing to see with good eyes an operating system that carries different optimization failures and that has too many differences between the Global and Chinese ROM, unfortunately for western models.

Which one to choose, based on its price

To know which one to choose from the two models, we always have to take into account its price. The Xiaomi Mi 11i is around 650 euros on Amazon , while the OnePlus 9 costs about 690 euros , just 40 euros more.

The attractions offered by the Xiaomi smartphone are a larger screen size, a 20 mAh battery greater than that of its competitor and a camera where the 108 MP sensor stands out in front. In return, the OnePlus mobile offers a much higher battery charging speed, improved performance if we opt for the 12 GB RAM version and, above all, a great improvement in its cameras thanks to its association with Hasselblad and to release the new one. 50 MP Sony sensor that corrects distortion in scenes shot with ultra wide angle.

We could think that there is a technical tie between the two mobiles, one betting more on the battery and another on the screen but again the operating system present in the OnePlus 9, much less intensive than MIUI 12, makes us bet on the OnePlus 9 .