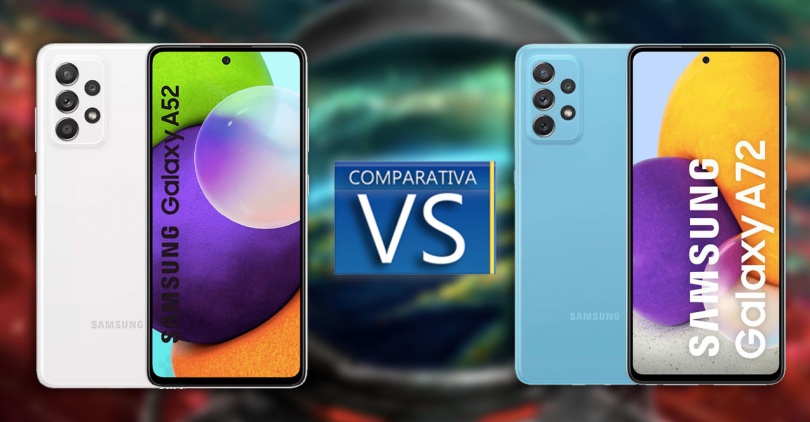 In 2021 Samsung has struck a heavy blow on the table that has rumbled in the offices of all its competitors. With the new members of the Galaxy A series, the brand is committed to bringing great features more typical of the high-end to smartphones that move in more moderate price ranges.

At the head of this renovation are the Galaxy A52 and Samsung Galaxy A72 that we face in this comparison because, although the two phones seem to have an identical design and a series of characteristics in common, there are actually 3 key points that can make you decide on the purchase of one or the other. The latest additions to the Samsung Galaxy A range allow the user to carry terminals that are more typical of the high-end than the mid-range in their pocket. It is clear that the brand thus fulfills its word expressed months ago where it stated that its intention was to bring great features to more affordable mobiles. For this reason, we should not be surprised that both devices are in the “top” sales of the brand.

The two terminals are committed to the use of perforated screens that offer a unique viewing experience thanks to the use of AMOLED panels with a high refresh rate, a design more typical of the premium range, high-quality cameras with OIS and a power guaranteed by Qualcomm . But, in addition, Samsung has made sure that users can enjoy the manufacturer’s most iconic features, such as water resistance and a long-lasting battery with fast charging, although, as we will see below, we will not find the right one. same cell on both devices.

The similarities between the Galaxy If they put the two smartphones in front of us, without any identification label, we would not know which one is if it weren’t for the fact that the A72 is somewhat larger and heavier, but not much, than its little brother. The two mobiles share the same design, they are sold in the same colors and, at first glance, they are very difficult to distinguish.

But it is not only the aesthetic aspect that remains unchanged between the two phones since, when we take a look at their hardware, we come across several common components such as their processor, memory configuration and the same options to connect to different types of networks.

Design with the same front camera

The two phones are planted in the market with the same colors (Awesome Violet, Awesome Blue, Awesome Black and Awesome White) and a 32 MP front camera with f / 2.2 that is located in the perforation that you will find in the upper part of the screen. The rear part is reserved for a rectangular camera package where we find, apparently, the same number of sensors but we will see that there is a fundamental change in one of them. To this we add the presence of a fingerprint reader on the screen.

In addition, as we have advanced a few lines further back, we must be grateful that both the Galaxy A52 and the A72 are resistant to water and dust thanks to an IP67 certification that makes the user to be largely unconcerned about what happens to the mobile .

Normally Samsung uses its own chipset to give life to its phones but right now what we find in the A series mobiles is a Snapdragon 720G processor, a CPU composed of 8 cores divided into 2 × 2.3 GHz + 6 × 1.8 GHZ and that It has been manufactured under an 8 nm process.

Related to the power of the device we also have the memory configurations in which we will be able to buy either of the two mobiles. Whether it is the cheapest model or the A72, we can choose between taking it home with 6 or 8 GB of RAM and with an internal memory of 128 GB or 256 GB, double that. If you’re wondering, yes, either of the two Samsung smartphones supports MicroSD cards up to 1TB.

Although there is a 5G model, neither of the two Samsung phones is compatible with 5G networks. This is something to value because if you want to connect to these networks you should go for the Samsung Galaxy A52 5G, which is not part of this comparison .

Beyond this peculiarity, we will have no problems connecting to dual-band Wi-Fi networks 802.11 a / b / g / n / ac (2.4G + 5GHz) or make use of its Bluetooth 5.0, its NFC connectivity to make payments with the mobile phone, charge the smartphone and plug a headset with an adapter into its USB Type 2.0-C port or configure its different location systems by GPS, Glonass, BeiDou and Galileo.

Sound to match on both devices

Another great point to assess so that we realize how these types of phones have changed from the Samsung catalog is in their sound. Both smartphones feature AKG stereo speakers, so far more characteristic of the firm’s family of premium smartphones.

The A52 and its counterpart, the Galaxy A72 , boast surround sound technology with Dolby Atmos technology, also enabling ultra-high-quality audio reproduction. Also through Bluetooth 5.0 we can enjoy dual audio and connect two devices at the same time to play sound through them at the same time. Before we advanced that the batteries of both mobiles are different but this is not the only thing that changes between Samsung phones, which also have alterations in the screen size and, consequently, in the dimensions and final weight of each one of them. the devices.

In addition, one of the keys to the A range of the Korean firm is that each model usually has some peculiarity in the camera that makes it different from the rest of the brothers in the catalog. This is precisely the key difference between the Samsung Galaxy A52 and the Galaxy A72 .

Buy the one that best suits what you need You already know that the three differences are in the camera, the screen and the battery. But more important than them is to know their official sale price. Here the big difference between one and the other is in the 100 euros (figure that can vary as time goes by, as it happens with any smartphone).

Nowadays, having a smartphone with a telephoto lens is a great help when taking all kinds of photos, not only in the distance. If we add to this that the A72 also has a somewhat larger screen and an extra 500 mAh of battery that makes it feel good, we recommend the purchase of this model. If you don’t care about the size of your storage, the 6 + 128GB option is more than enough for everything you need.

If price is an impediment for you and you do not care so much about the battery or the camera, the Galaxy A52 will more than meet all your needs as it is still an excellent value for money.