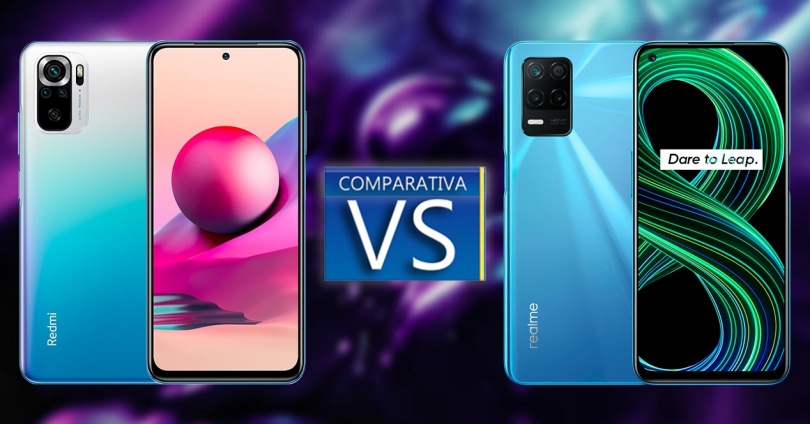 We are present before two mid-range smartphones that have landed in our country nothing ago, we are talking about the Redmi Note 10S and the Realme 8 . And they have come to revolutionize the mobile market, since they can offer us great features and with prices that do not exceed 300 euros.

In addition, we can agree that both mobile devices will be very good acquisitions and that we may not lack anything with either of them, although their small differences may be what determine our final purchase decision. For all this, we are going to take into account each of the details of these smartphones , so that you can end up choosing the one you really need.

As soon as we begin to observe them, we can find a great similarity in the aesthetic section of these models, since especially the front part presents us with a screen with similar inches, but that differentiate the hole for its selfie camera. In addition, in both cases they opt for AMOLED technology for their panels , although in the Realme terminal we find a Super AMOLED. As for the size of its panels, we can see that it is a little larger for the Xiaomi mobile, since it has 6.43 inches compared to the 6 inches of the Realme 8 . In this section we must also mention that they use Full HD + 1080 x 2400 px resolution, with a classic refresh rate of 60 Hz by both models, and the two panels protected by Corning, although the Note 10S has with the Gorilla Glass 3 version.

If we stop to see the dimensions of both models we can see that they are very similar, the Realme measures 160.6 x 73.9 x 8 mm and weighs 177 grams, while the Xiaomi mobile has a size of 160.5 x 74.5 x 8.3 mm with a weight of 179 grams. Therefore, we are facing two very similar terminals both in their screens and in their dimensions, so the only difference we can find is in the notch for the selfie camera and in the technology that protects its panels.

A MediaTek brain on both mobiles

In this case, the two manufacturers have decided to choose to integrate a MediaTek Helio G95 CPU into their mobile devices, which we had already seen in other phones marketed last year. It is a processor that is configured with eight cores, divided into two Cortex-A76 performance cores that can operate up to 2.05 GHz, along with six Cortex-A55 efficiency cores with a maximum clock speed of 2 GHz. . In addition, it has been manufactured under a 12 nm process, and accompanying this processor comes a Mali-G76 GPU that operates at a clock speed of 900 MHz.

Equality in their cameras

We are facing two inexpensive models, but that does not mean that their cameras are not really up to the current mid-range. This is because both terminals offer us a great image quality when taking pictures, thanks to their 64 megapixel main lenses with f / 1.79 aperture that allows the user to record video in 4K and 60fps. Although we can see how the design they have chosen for their quad cameras changes. As for its other three sensors, they both feature a second 8MP ultra-wide sensor, a 2MP macro camera, and a 2MP depth sensor. However, equality disappears a bit in its selfie cameras, since the Realme 8 has 16 megapixels with f / 2.1 aperture, while the Redmi Note 10S has 13 megapixels with f / 2.4 aperture with which we can record videos in FullHD , something that also happens in the Realme.

Another important point to take into account in these two smartphones will be in their batteries, where both terminals that we are comparing come to offer us enough capacity to reach the end of each day. In the same way, the battery of both models promises to last us a long time with its 5,000 mAh, although in the fast charge this equality varies somewhat, since the Redmi Note 10 S offers us up to 33W compared to the 30W of the Realme . Regarding connectivity, none of the models have a 5G connection , so we can only enjoy 4G. In addition, the Realme will offer us a Bluetooth 5.1, compared to the 5.0 of the Redmi. Both models have GPS, audio jack and NFC.

The layers of customization that we find in these two models are among the most interesting that exist today, realme UI 2.0 with Android 11 for the Realme versus MIUI 12 with Android 11 on the Redmi. So here it will depend more on our preferences, based on what we have tested or seen because in both cases they work perfectly with Android. What mobile to choose?

Now it’s time to know their prices, we focus on the version of 6 and 128 GB of memory that the two phones offer us, so they will be on equal terms. Starting with Realme, we find it for 229 euros in the main stores and the Redmi Note 10S for 249 euros, which leaves us a small difference of 20 euros.

We have been able to verify that both phones share many characteristics , such as their batteries, processors, panels … So we have to find the differences in whether we prefer a mobile with MIUI or Realme UI, its fast charge, the selfie camera or its price. In both cases, we will have mid-range terminals that will give us very good results, so the final decision we make will be totally successful.