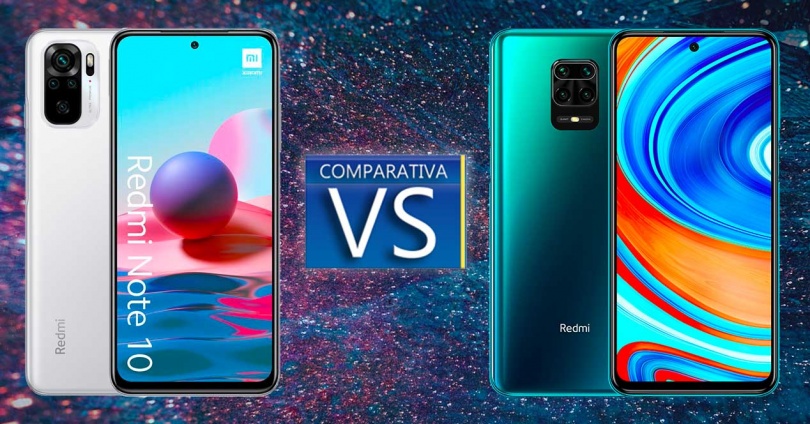 Xiaomi never ceases to amaze us with the large number of models it has in the smartphone market. The Redmi Note 10 was presented just over a month ago drawing the attention of users. In addition, it is a mobile that aims to clear the entire mid-range, including its direct rival, the Redmi Note 9S .

The Redmi Note 10 has become a revolution since it has a great value for money that every user wants. In front of this we find the Note 9S, a smartphone that has been on the market for the longest time. Therefore, to facilitate your future purchase, we are going to know each of its characteristics to know which is the best option . Design and screens with notable differences

Just looking at these two models you can see quite a few changes, such as, for example, in their design in terms of the position of the cameras, since you can distinguish between the quadruple camera in square format of the Redmi Note 9S , in front of the cameras. In its rectangular shape of the Note 10. In its materials there are few changes, since both models are made of plastic, although the main difference is that the Redmi Note 10 also has metal while its rival has a matte finish that provides hardness enough to withstand the odd fall.

In addition, both have P2i Nano coating protection, a special resistance to splashes and accidental water spills. In weight we also find differences, both share 208 grams and in dimensions the Redmi Note 9S does have 208 grams, compared to the 179 of its rival , it is also thicker and taller. Its screens are a very important section, the Redmi with 6.67 inches IPS in 20: 9 format and FullHD + resolution with HDR10 . Before this, the Note 10 with Super AMOLED technology and a 6.43-inch screen with FullHD + resolution of 2400 x 1080 px. Both are good screens, and we can also see how both models have a refresh rate of up to 120 Hz.

The brain of these smartphones shows us how the upper-middle range has evolved, offering us more and more the best options on the market. In the characteristics of the Redmi Note 9S the Qualcomm Snapdragon 720G processor, which works at 2.3 GHz sharing, and has the Adreno 618 GPU compared to the Adreno 612 of the Redmi Note 10. In addition, the latter is accompanied by a Qualcomm Snapdragon 678 processor that works with 8 Kyro 460 cores at 2.2 Ghz. Of course, both models opt for LPDDR4 RAM technology in their memories.

The memory options are the same, since both offer us two types of configuration, 4 + 64 GB or 6 + 128 GB . In addition, we can expand its internal storage, since both terminals have an SD card slot.

Tied in their chambers

In both we find very even cameras that are distinguished more than anything in their design, since the two models have a quadruple camera in which its main sensor is 48 Mpx with aperture f / 1.79, along with a wide angle of 8 Mpx. And we cannot forget the portrait mode with a 2 Mpx depth sensor, although we do find a small difference in its macro lenses to photograph small objects, since the Redmi Note 9S has 5 Mpx, compared to the 2 Mpx of the Note 10 In the front camera we can also see an inequality, between the 16 Mpx of the 9S with respect to the 13 Mpx of its opponent.

Batteries to another level MIUI 12 present in both

In your operating system or the customization layer we have no problems or differences, in both models we will have a layer with as many additions as we can imagine and an immense diversity of options. And it is that, it could be said openly that we have one of the best layers of personalization. From dark mode, to multiple customization options. Without forgetting the optimization that in both models we can stretch the battery throughout an entire day. In both cases under this layer is Android 11, the latest version of Android. Although, in the coming months the Redmi Note 9S is expected to receive MIUI 12.5. However, it is not known for now if the Redmi Note 10 will be able to count on this new update.

When taking a look at both models we can hardly find a big difference in prices, since on the one hand the Note 10 can be found for 164 euros . After having known all its characteristics, beyond the AMOLED screen, the NFC and the improvement of fast charging, its low price is very striking. On the other hand, the Redmi Note 9S with all its benefits is at 162 euros on Amazon and could continue to decline in the coming weeks.

If we had to make a decision, we would opt for Xiaomi’s Redmi 9S since it has a better processor and screen despite being a previous model, in addition to the fact that MIUI 12.5 is posed as a great revolution in terms of layer performance. Despite this, the Redmi Note 10 is another safe option, and newer, which has a price quite adjusted to its rival that may make us prefer it. Although, without a doubt, both Redmi would be a purchase with which we will not regret. So now, you will have the last word in the final decision.