When purchasing a new device or renewing ours, we consider aspects such as the RAM that it will have, or the processor it will have. In most cases we look for Windows 10 and its applications and games to work in the best way on that PC.

But of course, we don’t always get the desired results in this regard, either because we haven’t bought enough powerful components, or for other reasons. In fact there are times when we find that, despite having enough hardware power, Windows 10 does not work well. Keep in mind that, over time, the software we use, both the system and apps, are more demanding.

This is largely due to the enormous functionality they offer us at the moment, something that also grows with the passing of updates . That is why what we initially thought was a very powerful PC , over time that feeling fades. But similarly, something that happens on many occasions, we can also notice that Windows 10 and its programs consume more resources than they should initially. This is a fact that can occur for various reasons, among which we find that some component is defective, or that we have malware in the system. But at the same time it may be the case that we do not know how to read the information that Windows 10 offers us in this regard, as we will check.

In order to be able to see in a few seconds which programs are consuming more RAM , on many occasions what we usually do is take advantage of the help Windows 10 Task Manager . This is an element that we can access through the key combination Ctrl + Shift + Esc, after which the new window opens. Here, with the More details on screen mode, the first thing we see in the Processes tab, are the programs currently open.

In this way and in a very visual way, we can see which are those that more CPU , RAM or GPU are using at that moment, all in real time. However, it may be the case that despite the exposed data, the percentage of RAM consumption is higher than what we see first hand. This is not due to an operating system failure , but rather because we are not consulting the information well.

We must know that many of the applications shown here, in turn have hidden processes that also consume RAM or CPU. Therefore, to ensure what each program actually consumes, it is best that we fully deploy it in the Task Manager. We achieve this through the small arrow next to each one, so it expands, showing everything that is in operation . 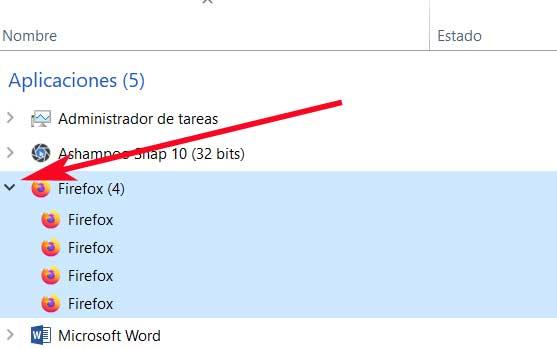 Thus, it can be the case that the initial RAM consumption that we see in a given app, is actually much higher, something that we can verify by simply deploying it and adding the consumption of its hidden or background processes .