It has been a long time since they stopped talking about the Canon EOS R5 and its temperature problems, those that prevent continuous recording at maximum quality and even at other resolutions in the way that would be expected in a proposal of this type. However, now we have to return to the subject because Matthew Perks, known youtuber for his DIY projects, has put a liquid cooling system and goodbye to limitations .

Admittedly, we loved the Canon EOS R5. Because technically the camera is a real madness, both for photographic quality and when recording video at 8K resolution and its other modes. The problem is that the user experience was effectively hampered by temperature problems that even today have not been fully resolved by the brand itself. 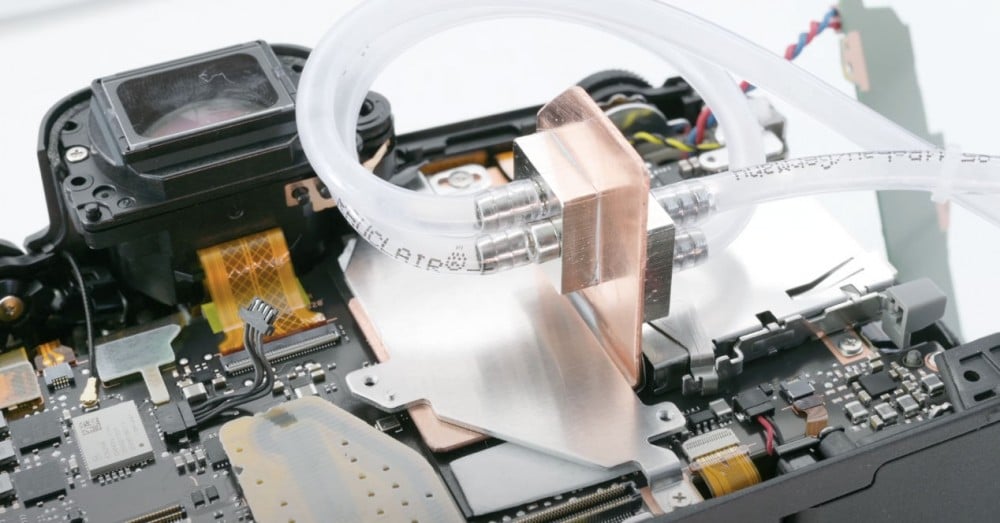 Not long ago a software update was sent that changed the way in which the temperature of the camera was taken into account for the completion of the recording , but I will tell you a little more about this later. Now what we see is how new solutions to this problem have not stopped emerging on the internet.

Right here we already tell you how there were manufacturers like Tilta that had created an external heatsink to help cool the body. Or how other users had added extra layers of dissipation by opening the camera at their own risk. But this that Matthew Perks has done is the latest of the last: putting a liquid dissipation system on it.

As you can see in the video, Perks manages to avoid the limitations when recording video with the EOS R5 . That is, if from the factory you are practically limited to 20 minutes of 8K video recording and then you need a good time to cool down and you can record again, hopefully another 20 minutes, that problem does not exist here.

What is the problem then of the modification carried out beyond losing all warranty? Well, it is not comfortable, because you would have to carry a cooling system with you as if it were a patient’s dropper. And it is that Perks integrates a liquid dissipation to not only increase the number of minutes that can be recorded but directly erase any limit that is not conditioned by the autonomy or capacity of the storage unit.

Canon and its latest firmware

As we said before, Canon released a firmware update (version 1.1.1) not long ago with which they changed some parameters when controlling the temperature of the camera. Thanks to that it improved something, because it had already been seen that by restarting what seemed to be the timer that controlled the recording, the recording could be prolonged.

Well, Perks with its modification saw how, without being extremely hot, the camera also stopped with the original firmware version, but after updating it could record without limit for more than four hours.

In the end, beyond the curious thing about the creation of Perks, what was clear is that this camera needs better dissipation if you want to use it as a video camera mainly. And maybe there Tilta’s solution is the best, because Perks himself put in a similar vented plate and was also able to extend the recording time to around 40 minutes. Although our recommendation is that if you are looking for a Canon camera for video, take a look at the Canon EOS C70 .