The best way to avoid losing our most important data is to make backup copies. However, when there are none, and disaster strikes, there is always a slight hope before giving it all up for lost: data recovery programs. We can find a large number of programs designed to help us recover deleted data; some free, and many others paid. Even Windows has its own free data recovery software, Windows File Recovery . However, this tool was too complicated to use, until now.

In mid-2020, Microsoft surprised users with a new file recovery tool: Windows File Recovery. This new program, also known as WinFR , reached users of the Microsoft system through the Windows application store, the Microsoft Store. If we have installed the 2004 version, or higher, of the system, we can download and install it directly from the store at the following link. What this program seeks is to allow users to recover their photos, videos, documents and other important personal files in the event of an accidental deletion, a failure in the hard disk, a virus or a bad format, among other causes. In addition to working with hard drives, it also works with memory cards, external drives, and pen drives.

Although it is a very basic tool, the first version of it was complicated, or rather, confusing to use. This is because it contained a lot of mixed options, nothing clear. Luckily Microsoft has decided to fix this problem and now, with the new build 21286, WinFR has fixed this problem.

Insider users who have this tool installed on their Windows 10 will be able to enjoy these new data recovery modes from today. They will eventually reach all users, but for now they have been released only for Insider users to be able to detect, and correct, any errors or problems that may exist.

From now on, WinRE will allow us to choose one of the following modes: 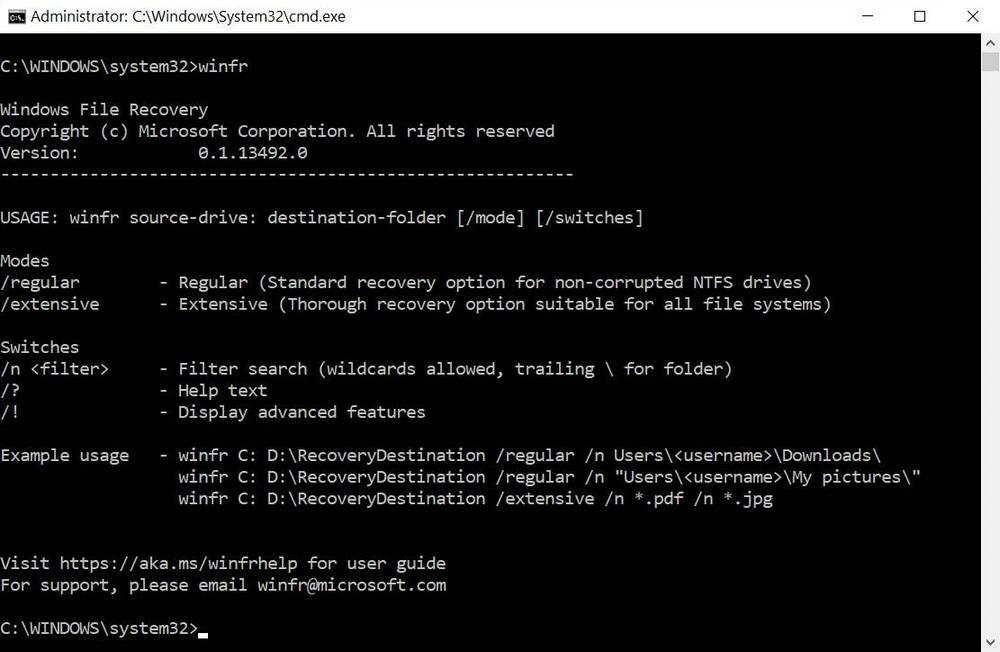 Microsoft has provided a table, which we should all have on hand, to help us more easily choose the type of recovery to choose:

As we have explained, for now only Windows Insider users, specifically those who use build 21286, will be able to use these new modes. We do not know when Microsoft will bring them to all users, although if everything goes well it should not take more than a few weeks to update the app from the Microsoft Store and offer these modes.

At most, this change would come with the launch of version 21H2 of Windows 10 , a version that will arrive in the second half of 2021 and that will debut many other changes in the operating system.