Wired connections are not affected by interference in the environment. If we throw an Ethernet cable of 30 meters , the signal will always arrive stable at the destination without loss if we have a good cable. However, with Wi-Fi the situation is very different, and more so in the 2.4 GHz band, which is one of the most saturated today. But there are ways to make it go better. If you live in a building, there are probably dozens of Wi-Fi networks around you . All of them operate in the 2.4 GHz band , while some others also operate in the 5 GHz band, and some of your devices may even be compatible with the new 6 GHz band. However, the 2, 4 GHz, being the most used, is the one that most tends to saturate and generate interference.

Why does interference occur?

As with any wireless signal, Wi- Fi is susceptible to interference from other nearby Wi-Fi signals that overlap, or even from other devices that also operate on those frequencies. For example, Bluetooth devices or microwaves in the kitchen emit signals at 2.4 GHz, and a microwave can, while it is turned on, create interference in the signal of our WiFi network.

WiFi channels overlap each other, but wireless networks typically use channels 1, 6, or 11 by default. We see the reason in the previous graph, where we can see that these three channels do not overlap each other. In other words, it is the maximum number of channels that can be available without overlap, since there is only 71 MHz of spectrum to use, and each channel occupies 22 MHz.

So why don’t all routers use just those three channels in the 2.4 GHz band? Well, because there would be even more interference within the channel. There are applications for mobile phones and computers that allow you to know how saturated your environment is. For example, with WiFi Analyzer for Windows 10, you can see what channels are being used by adjacent networks on 2.4 GHz on the graph, as well as what channels are using on 5 GHz. Looking at the graph, in my case it would not be It’s a bad idea to use channel 1, which is also the one that offers the most range (no matter how small the difference). 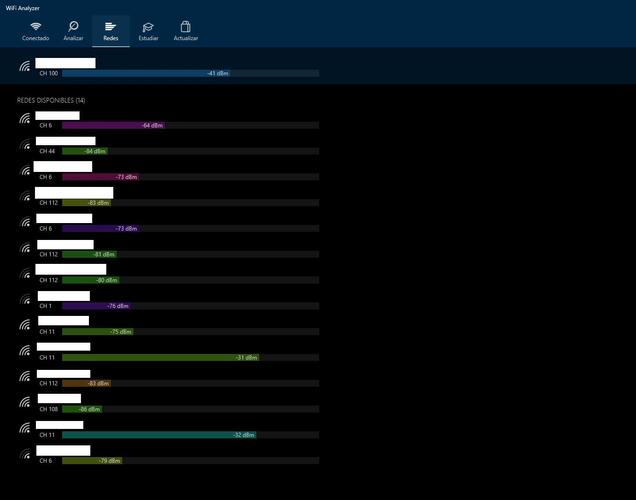 Other programs like inSSIDer even have recommendations on which channels to use. In fact, as soon as I open it, it effectively detects that channel 1 is the least crowded around me, and that performance could improve if I changed it on the router. Some modern routers automatically choose the least crowded WiFi channel, but unfortunately most don’t. In addition, the program also measures WiFi usage on each channel, including nearby networks. 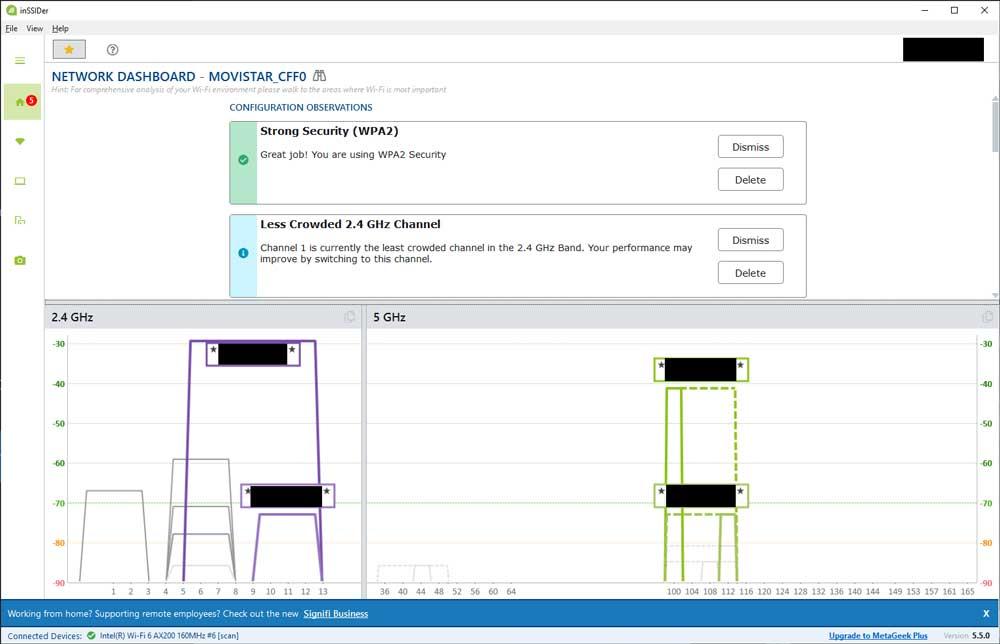 For this reason, it is best to always use channels 1, 6 or 11 , since they are the ones that are farthest from each other and do not overlap . Of these, it is best to choose the one that uses the fewest networks around us, and, above all, the networks that are furthest from ours, which we can see in data such as attenuation . The closer the value is to -90 dBm , the less powerful the WiFi signal that reaches our receiver will be.

In the 5 GHz there are hardly any interference problems

The higher the frequency of which a channel is available, the more speed we can achieve. That is why the 5 GHz band was launched, with a smaller range, and with a greater number of channels, which are also wider. Thus, most people who use WiFi do so near the router, and thus do not have to overload the surroundings.

Thus, as there are more and more routers and devices using 5 GHz thanks to the higher speed they offer, these frequencies can also interfere with each other. Using the 6 GHz band will help further reduce the load on the 2.4 and 5 GHz frequencies , as well as get higher speeds. With 6 GHz there will be in Europe up to 3 channels of 160 MHz bandwidth, which do not overlap each other. With the 5 GHz, the channels are up to 80 MHz.