Windows has never stood out as a fast and lightweight operating system. Rather the complete opposite. Both the operating system itself, as well as the programs, consume much more resources than in other systems, such as Linux. And this is due both to the complexity of its kernel and to the poor optimization of many developers. However, in 2016, Windows 10 suddenly skyrocketed RAM usage . And this has not decreased since then, but rather on the contrary, it has been increasing. What happened? Before the advent of Windows 10, the operating system made heavy use of paging memory. Whenever some resources had been in memory for a long time, without being processed, they were moved directly to the paging file on the hard disk to leave as much free memory as possible. This process frees memory, but has a very negative impact on performance.

With the arrival of Windows 10, Microsoft began to use another technique to save resources: compressing memory . When the resources are not used, instead of sending them to paging, they are compressed, but they are still kept in memory. Of course, as long as there is RAM available. The data compression and decompression processes take time, but this is much less than sending the data to paging. When there is not enough space in memory, then the compressed data is sent to paging to free up as much space as possible. 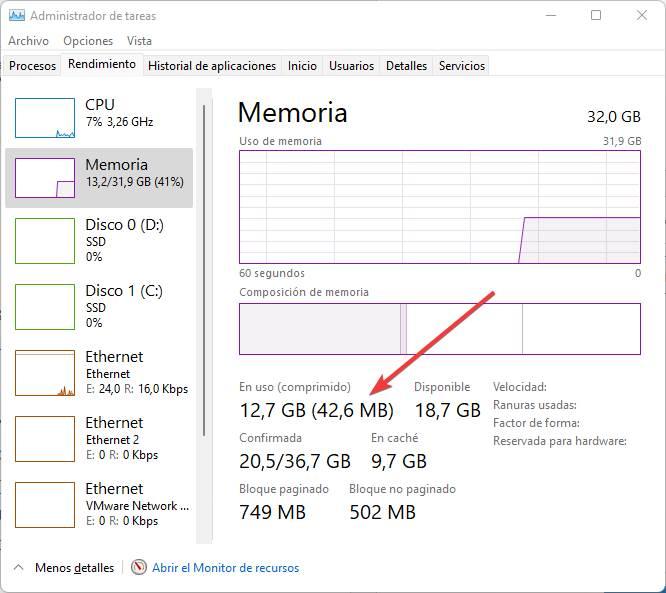 As time has passed, Microsoft has adjusted its operating system so that it uses less and less compressed memory. And currently, whenever RAM is available, an attempt will be made to avoid the use of this compression.

Is it bad for Windows to use more RAM?

We always look for operating systems and programs that consume less memory, and think that this is a good thing. However, it doesn’t have to be that way. Windows consumes a lot of RAM, more than older versions of the OS, because as long as there is enough RAM it tries to avoid both paging and data compression.

It is useless to have a PC with 32 GB of RAM if we do not let the operating system use it. The RAM memory is for use, and it is much better that something consumes us 4 GB of memory, and that it is, as is, in the RAM, before it occupies 1.5 GB but is compressed or saved in the paging.

If our computer is low on memory , we don’t have to worry either. Windows is automatically in charge of controlling the available resources and, in case the memory is filling up, resorting to these two techniques that we have already talked about so that our PC works without problems.

We remember that Windows 11 , in addition, has increased its minimum requirements, now asking to have at least 4 GB of RAM. Do you need them? No, but with them avoid using data compression, and paging, so that the system can work better.