First of all, we must know that having a good operating system on your computer is essential. This will help us to be more productive, work safely and be comfortable on the PC. We can use Microsoft‘s popular Windows, for example, or one of the many distros, such as Kali Linux.

In fact, in these times, there are many who choose to migrate from the Redmond system to an open source one, or simply as an alternative system. Well, among the many Linux distributions that we can use at the moment, one of the most beloved and popular is Kali Linux . The main reason for all this is that it has a series of characteristics and advantages that attract more and more users. Precisely for this reason, together with the fact that these distros are becoming more and more affordable for the majority, many are considering migrating from Windows and starting to use Kali Linux. It is an important step, that is undeniable, but for that reason we must not back down. In fact in these same lines we talk about some of the reasons why you can decide to put aside the Windows system, and opt for the aforementioned Kali Linux

We don’t have to pay to use Kali Linux

One of the main differences that we find when opting for a Linux distro instead of Windows , is that most of the former are free. Although we find Windows 10 most of the time pre-installed on a new PC, one way or another, we pay for it. That happens if we acquire the license on our own, but it is not the same in Linux distros, at least in most of them.

Therefore, if we choose to use Kali instead of the popular Microsoft system, we start to win from the first moment.

This Linux distro focuses on security

For lovers of privacy and security , it is likely that Kali Linux is precisely one of these systems that prioritizes these sections. This is something that its developers have more than patent, so we will be much more protected than with any Windows-based PC. Also this distro is based on Debian , which is always equally a guarantee.

In fact, if we want to go a little further and we are very interested in all these issues, to say that this proposal offers us a lot of content related to ethical hacking. To do this, it puts at our disposal, from the outset, hundreds of applications dedicated to all this that we comment on. Thus, it goes without saying that those who want to enter this attractive and striking software sector will find an excellent alternative here.

And that’s not all, but also those who want to delve into or delve into these sections that we are commenting on, the operating system makes things much easier for us. And we must bear in mind that this distribution puts at our disposal a huge number of programs of all kinds, pre-installed and at no cost. In addition to those mentioned focused on ethical hacking and security, we will see utilities of all kinds to use from day one. 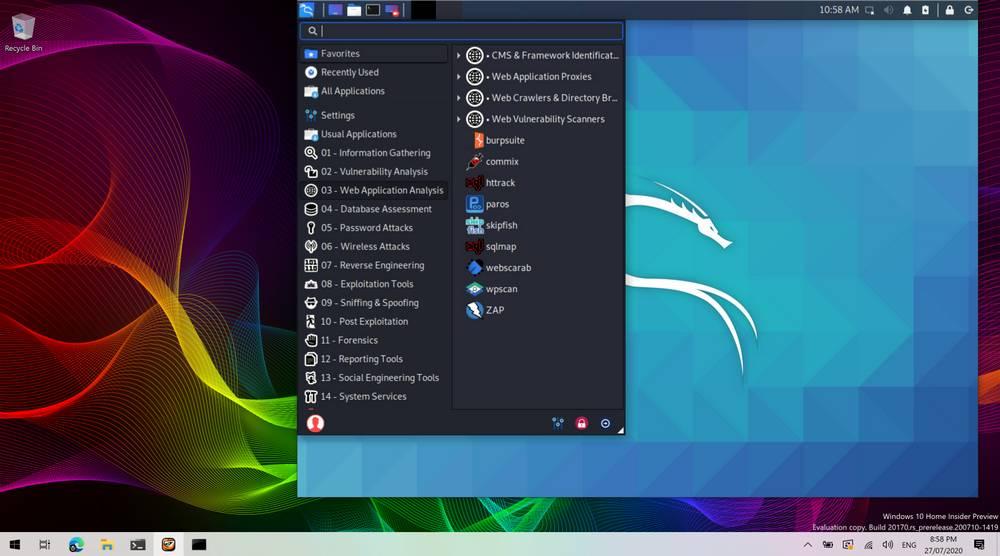 We are going to finish by saying that, contrary to what happens with Windows 10, Kali Linux is perfectly capable of working without any problem on computers that are somewhat old or limited in terms of specifications. As you can imagine, with all this what we really do is give a second life to our PC, the one that we already had abandoned in a corner. So we can use it in a multitude of tasks, largely thanks to the few resources that Kali Linux consumes, and the applications it offers us.