Buying a mobile is an important decision, as there are many factors to take into account. Not only if their specifications seem better or worse to us, but also others related to price, such as the value that they will retain after a few years of use. That is an important question when buying a mobile.

And, as you well know, not all mobiles retain the same value after a few years of use. And no, precisely the relationship of high price and high value after use is not that literal, but there are brands that with the same price retain a greater value than others, as you will be able to see below. Apple and Samsung, the most valuable

So at least a study published by a British retailer assures it, and that shows the average value of the mobile phones of each brand, after one year and after two of use. As we say, Apple‘s are the most valuable mobiles after a year of use, since they only lose 41% of their initial value . While Samsung is the second, losing 64% of its value during the first year. Of the top five, the one that loses the most value in the first year is Huawei, which loses 75% of its value in the first year. 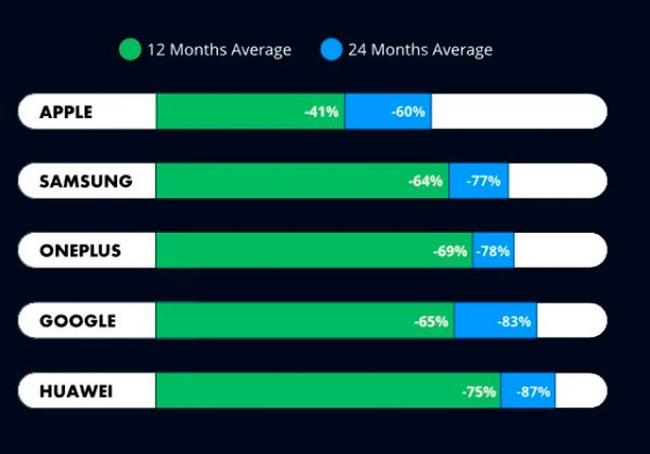 What models lose the most value?

The study is of great value because it comes from a British refurbished cell phone store, so they have first-hand information on the value of the devices. And when we talk about specific models, the ones that lose the most are the Huawei, and among these it is the Huawei Mate 30 Pro that loses it the most after a year of use, with 87% of its value, something that seems undoubtedly exaggerated. . On the other hand, the mobile that loses the least value is the iPhone 11. This only loses 33% of its value, compared to 87% of Huawei .

Therefore, we are facing two mobiles that may have a similar price at launch, but that after two years of use have a very different value. As you can see, it is something to keep in mind, because without a doubt when we make an investment, apart from having a satisfactory experience, we hope that this investment can be recovered as much as possible after having used it. The latest data that this report gives us is that in the United Kingdom, users change their mobile phone every 16 months . Logically the numbers and models may be different in Spain, but we can get an idea of how it can be in our country, since the value of the brands is usually quite similar.