One of the things they like least about Windows 10 is the obligation, on Microsoft’s part, to have its own programs installed. That Windows can bring certain software installed by default is not a problem (in quotes), but not being able to uninstall these programs changes things a lot. Although Microsoft with each update of Windows 10 has been giving a little more control to users, they are still a long way from having complete control over system apps. But, with the new Insider build, we are one step closer to achieving it: we can finally remove the Contacts app from Windows 10 .

Until now, if we try to uninstall the Contacts app from Windows 10 we will find that it is impossible to do so. Neither from the Settings menu, nor by right-clicking on it. There is no such possibility. Luckily, little by little Microsoft is opening its operating system a little more, and very soon we will be able to delete this app like any other.

Delete the Windows 10 Contacts app like any other program

Since Windows 10 build 20215 , all operating system users will be able to uninstall the Windows 10 Contacts app officially, without resorting to commands or other tools that can damage our PC. To do this, all we will have to do is locate the app in the start menu, or in the search engine, and choose the option to uninstall by clicking on it. 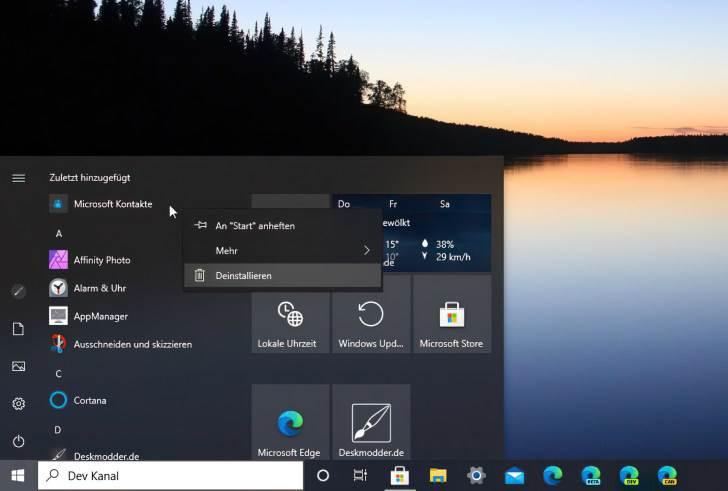 This means that we can also uninstall the application in other ways, such as, for example, from the uninstall programs section of the Windows Settings panel. The Microsoft contacts app is not very big and it is not very resource intensive. But, if we do not use it, it is better to have it deleted to avoid having unnecessary software on the PC.

Also, if we regret it, we can easily reinstall it in seconds. So yes, Microsoft.

Also, this change will be reversible. This means that, if we repent, we will be able to reinstall the app very easily. For this we will only have to search for it in the Microsoft Store , as one more app, and install it from there.

The contacts app will reappear on our computer.

How to delete the app before Windows 10 21H1

Obviously, it doesn’t do us much good to know that we will be able to delete this app in more than 6 months. Therefore, if we are tired of it and we want it to disappear from our Windows 10, we can do it “by force”. To do this, we simply have to open a PowerShell window, with Administrator permissions, and execute the following command in it:

This command will erase the application from our PC without leaving a trace. After restarting the PC we can see that the Contacts app no longer appears in our system. We have finally gotten rid of her. And if later we want to install it again, it will be enough to download it from the Microsoft Store as we explained in the previous step.