Much is said about the performance of one and the other console , and a very frequent question among users is how to measure the performance or the FPS on the consoles if there are no tools for it? On PC it is very simple, since many games have internal benchmarks , and there are tools like FRAPS that do the same. On consoles, regardless of which one, things get a little more complicated, and in this article we are going to tell you how they do it .

Actually, there are several different methods that can allow us to measure the FPS performance of the consoles, but none of them is as simple as putting FRAPS in the background while running the game and having the data collected automatically, as we can do on PC. However, it is very important to be able to measure this performance to be able to determine the effectiveness of one or the other console, so let’s see how professionals do it. As a note, there are developer tools that effectively allow you to automatically measure FPS in games (with debug mode ). In contrast, these tools are only available to developers, and they must have a special TEST console that you can only access if you are registered as a developer, and therefore it is not something that, even the specialized media, we can have access. 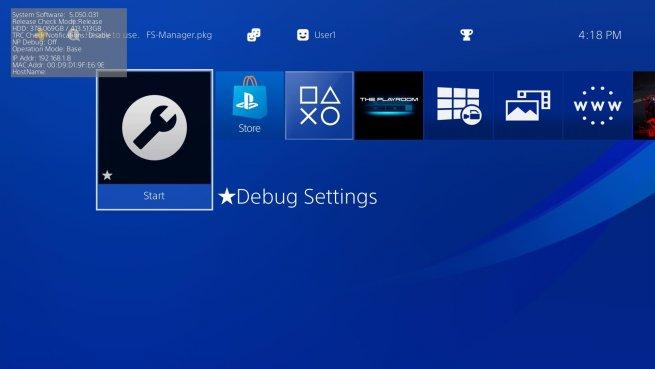 How are FPS measured on consoles?

Since 2008, the tools available to analyze the performance of a console have come a long way, but the basic principle has not changed at all: a high-end grabber (so as not to interfere with performance) is used to capture video. without any compression directly from the HDMI ports of the console to a computer, in which each frame of the video is compared with the previous one looking for duplicate data, locating short lines and calculating the frame rate from there. 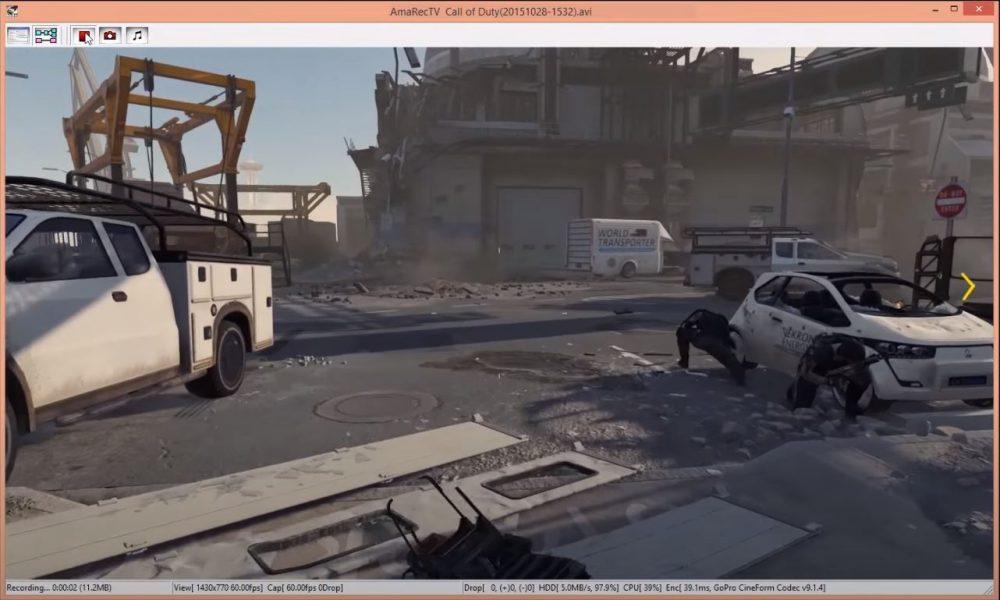 Initially there was only one tool for this, and it was also run on the command line: FPSdetect.exe . This tool allowed you to scan a captured video to determine how different a frame was from the previous one. Later came FPSgraph.exe , also from the command line, which used the .txt files generated by FPSdetect to create transparent .TIFF files with performance graphs.

The bad part is that one TIFF file is generated per frame superimposed on the source video, so it had to be edited with Adobe After Effects or similar and it was quite tortuous to work in this way, since any error in the calculations required manually editing the txt file and get the corresponding TIFF again. For this reason, in the end, the tool that is used today to analyze recorded videos was created: FPSGui . 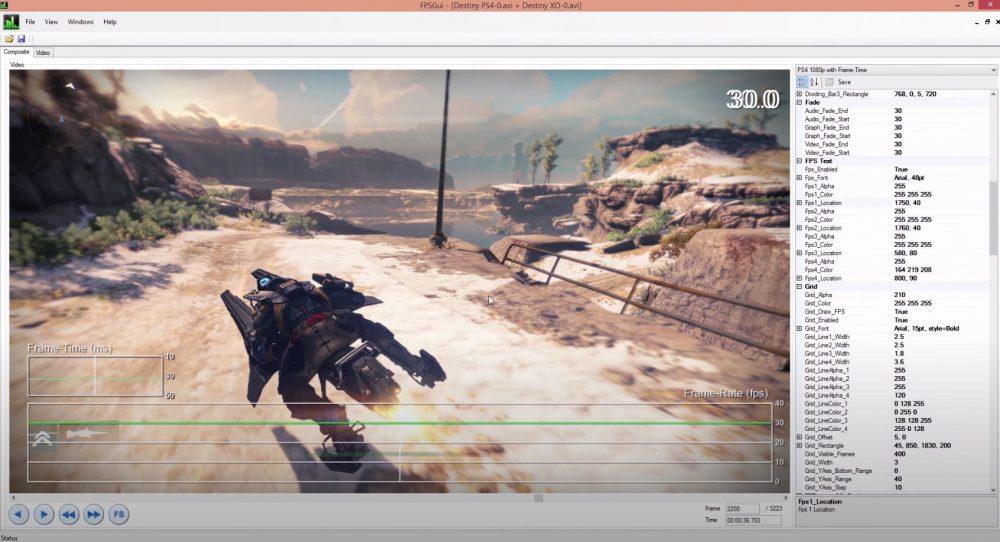 This software consists of two main elements: an initial editor that allows you to define the appearance of the video in terms of graphics, sources and number of videos to be inserted (allowing, for example, to put two simultaneous videos comparing the same scene on two different consoles ) and on the other hand there is the viewer, which contains the analysis data for each imported capture along with various display modes. All in all and with that, it is difficult to obtain an accurate analysis, since the data still comes from comparing frame by frame to a recorded video.

In theory, calculating the FPS with the information from the frames is quite simple, but in practice there are a number of additional variables that can throw all the work in the trash: sometimes, the data that travels through the HDMI interface “disappears “, which means that duplicate frames are no longer mathematically identical. Games running at 60 FPS without having vertical sync turned on can have many short lines where there is no common data with the previous frame, making it very difficult to calculate FPS.

Sometimes, following the example, a new game arrives that is presented in a completely different way than the previous ones had, and in these cases many manual corrections or a change in the import parameters of the video are required to have reliable data. 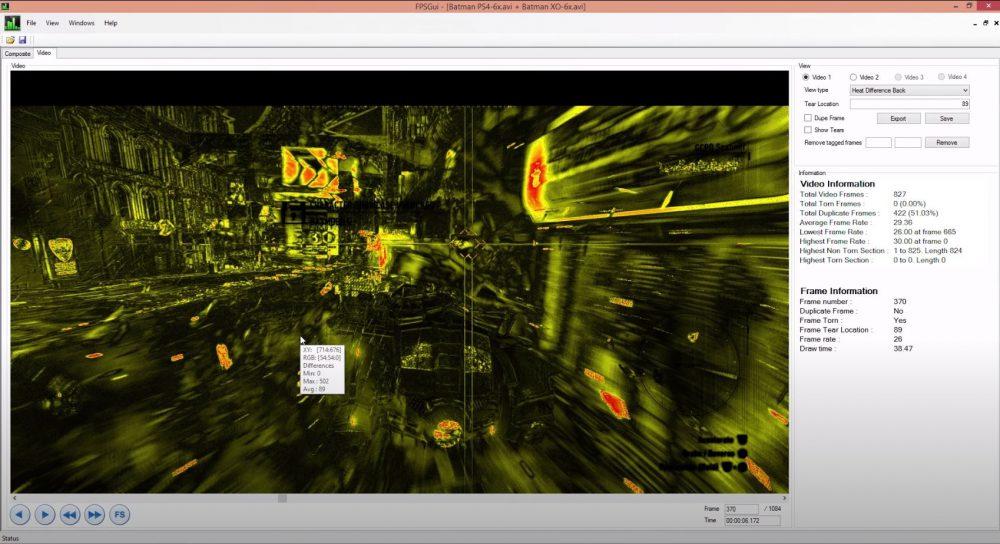 The latest version of the tools added support for NVIDIA‘s FCAT, a PC overlay that marks each individual frame with a different colored border, making cutline detection an obstacle. This, however, allows comparative evaluations to be presented in the form of video (those split-screen videos showing the FPS of the consoles that we frequently see), which gives a much clearer view of the performance of the consoles.

So can I measure the FPS of my console at home?

By proxy you can, but as we have explained it is quite complicated to do. The way some professionals do it is, as we have explained, with a very high-end grabber that does not influence performance and can capture uncompressed video directly from the console. That is the simple step and that we can all do in our homes, but then the complicated thing is to analyze that video and extract the information that interests us in order to empirically measure the performance of a certain console in a certain game.

Now, how to get those tools like FPSdetect, FPSgraph or FPSgui that we have talked about? In this case we have told you about the internal tools used in Digital Foundry, and that is that as we were saying there are no specific tools such as FRAPS for PC, to measure performance on consoles.

You can always analyze the video manually, of course, and you can even create a script that takes all this information out of a plain text file from which you can easily make graphics later, but in any case … you will have to “work” it for yourself. bill.