Many of us are waiting with anticipation for the arrival of the new high-end mobiles from the Chinese firm. And it is that the Xiaomi 11T and 11T Pro will be the new mobiles that command its range of phones. Now we have known what will undoubtedly be one of the best features of these new models.

And we hope that these phones will be presented very soon, more or less at the same time as the iPhone 13 that we expect for less than two weeks. And little by little new features are being confirmed. You will have the fastest charge

From this phone we expect many top-level features, and one of them has now been confirmed by Xiaomi, or at least by a video that has been shared on networks, and where it is shown that the fast charge of the Xiaomi 11T Pro will have a charge. 120W fast , the fastest that the brand currently has on a commercialized mobile. 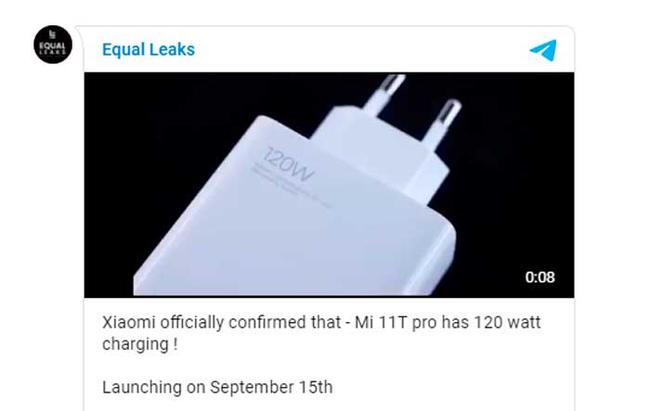 It is not the first, but it will join this select club of mobiles that can charge its battery in less than 20 minutes , something spectacular if we take into account the limited speeds of mobiles such as iPhones. In this video several images are shown, with the ultra fast charger and an image of the terminal charging at this speed, although the reality is that nothing is revealed that can give us an idea of its design.

What else do we expect from them?

These phones will stand out for having a photo camera with a 108 megapixel main sensor. In addition to this sensor and the traditional ones, we could find another that will help improve the focus of this camera. A terminal that would arrive in two versions, with two levels of performance. The standard version with the MediaTek Dimensity 1200 processor , while the Pro model would debut a Snapdragon 888 processor , something that disappoints us since many of us expected the “Plus” version of this processor.

The screen will have a great refresh rate, possibly 144Hz , and the battery will undoubtedly be the icing on this cake that the Chinese firm is preparing for us. Therefore, the ultra fast charge of Xiaomi would be released on a mobile that is somewhat more accessible than the Mi 10 Ultra where we had previously known it. The normal thing is that this model has a price more similar to that of the Xiaomi Mi 11. Let us remember that this terminal will be one of the first to dispense with the “Mi” from the name of the phone, remember that it is something that has already happened with the Mix 4, before confirmed by the firm itself just a few weeks ago. So we have to wait until September 15 to officially know this expected mobile of the Chinese brand.