Those places we are talking about are areas with little population. They are generally small towns, in which little by little population is losing. Now in our country, a term that is being coined a lot is that of “emptied Spain”, however, it is not something that affects only us, it also happens to many other countries. The situation is that in these sites they cannot contract fiber optics and sometimes not even ADSL, the only alternative is to connect to the Internet via 3G / 4G if they have decent coverage, but in most cases, the only solution is to contract Satellite Internet.

This type of Internet connection works through the installation of a satellite dish on the roof of the home, with which the signal emitted by the satellite is captured. From that parabolic antenna, a wiring begins that reaches the router from which we obtain connection, either by WiFi or through an Ethernet network cable. 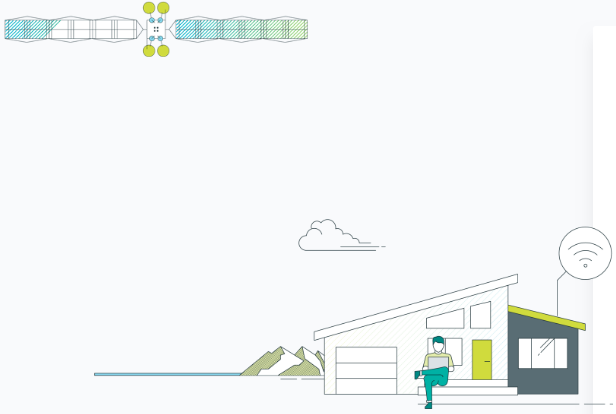 Among the companies that offer satellite internet we have:

On the other hand, the large telephone companies such as Vodafone, Movistar or Orange do not offer satellite Internet. However, they market other types of rural connections such as Vodafone One connects , Movistar Internet Radio and Orange 4G at home .

According to the National Commission of Markets and Competition (CNMC) it is legal to share the internet. On the CNMC Blog they comment that it is legal to do so, as long as a series of requirements that we will mention later are met. First of all, the neighborhood community should not register in the Registry of Operators. In addition, you must meet a number of conditions:

Therefore, satellite Internet can be shared between multiple houses as long as these rules are followed.

So you can share the Internet with your neighbors

Depending on how your house and that of your neighbors are, we will have to use certain network equipment or another. The first thing to think about is that the operator will install a Wi-Fi router in our home, the typical Wi-Fi router with simultaneous dual band to connect with all devices easily. Once we have a connection in our house, we will have to think about how to bring that connection to our neighbor’s house via Wi-Fi.

Normally in rural areas houses are built and not flats, so our neighbors will be right next to each other at the same height, or several meters away from us. We are going to recommend different types of network equipment if you are going to need to share the Internet with one or more neighbors.

If your neighbor is glued to your wall with wall

If your neighbor is attached to you wall to wall, that is, in the event that the houses are located nearby, a dozen meters and with good coverage inside, we could use a USB or PCIe adapter so that the neighbor can connect with their computers. For example, they are ideal for connecting our desktop or laptop PC.

The ASUS PCE-AC88 can get the maximum wireless performance from your router, because it has four external antennas in MIMO 4T4R configuration. In addition, it has achieved real speeds of 750 Mbps, and in remote places the performance is also excellent.

This ASUS PCE-AC58BT card is one of the best value for money. In addition, it offers great performance since it will allow you to achieve speeds of 107 MB / Bluetooth 5.0 is also incorporated. It also achieves very good results in locations far away from the Wi-Fi router.

The TP-Link Archer T4U has a USB 3.0 connection, it is very similar in performance to the rest of other Wi-Fi cards of the same category. The performance in terms of coverage and speed is outstanding, and so is the stability of the connection. Installation in Windows 10 is simple since the operating system recognizes it automatically.

In case the neighbor does not get good coverage, the most advisable thing would be to buy a home Wi-Fi repeater, and place it near the wall next to the neighbor’s house, so that it extends the wireless coverage and does not have problems with any device that connect. In these cases, it is highly recommended to buy a Wi-Fi repeater that is simultaneous triple band, so that we have a frequency band specifically dedicated to interconnection and obtain the best possible performance.

In this case, our recommendation would go through the AVM FRITZ! Repeater 3000 which has great performance and two Gigabit Ethernet ports for the LAN.

We also have to recommend the NETGEAR EX8000 Nighthawk X6S, a team that has very similar characteristics and a really interesting performance.

If your neighbor is in a separate house within 75 meters

If the neighbor is relatively close, but in separate houses, you can opt for antennas and / or outdoor access points, powered by a PoE injector or a PoE switch. It is a more expensive solution but the Wi-Fi connection will work perfectly, in this case, you can choose two types of devices:

In this image you can see the difference between a simple antenna and an antenna with embedded system. 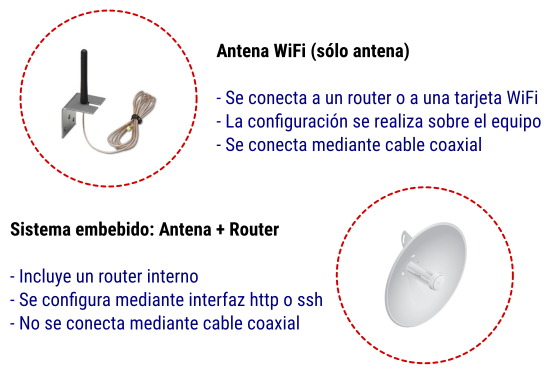 In relation to sharing satellite Internet between several houses, we will generally use antennas with an embedded system, that is, with an outdoor Wi-Fi access point.

If you are relatively close to the neighbor, you can opt for a professional outdoor AP with omnidirectional antennas to reach any point in the neighbor’s house, and even to cover the garden of your house.

If you are further away, then you will have to go directly to an outdoor access point with a directional antenna, and place an AP at the source and another AP at the destination, so that there is correct connectivity between both houses.

Considering that the internet speed is low, you won’t need too much bandwidth on the wireless link. Once you’ve made the link, just put a neutral router in your neighbor’s home to cover all the space you have.

If your neighbor is very far from you, but you have a direct view of his house, it is likely that you can get a point-to-point link with teams specifically oriented to this task. One of the best equipment you can buy is Ubiquiti’s, be it its NanoStation, NanoBeam or any other family, since it is a manufacturer widely used by WISP operators and they have great experience.

Buying two units of this equipment, and using the brand’s own software, you could get long-distance links very easily, so you can share the Internet with your neighbor no matter how far away.

Finally, as you may have seen, we have quite a few devices that we can use to share the Internet by satellite, the most common being PCI / USB devices, outdoor antennas, access points with omni-directional antennas and also with directional antennas to get there. further away.