When we work on a daily basis with our Windows 10- based team, there are many built-in functions that we ignore for the time they have been there. That is the case, for example, of the screenshots, something very important but that we do not miss until we can not use it. But with everything and with it, we can always make use of third-party proposals for these same leaders, as happens in the case of Screenpresso.

We talk about the screenshots, as we can also refer to the copy and paste functions, among others similar that are implicit in Windows . But of course, the point is that we use them so regularly that we don’t miss them until we can make use of them. As we mentioned before, this is the case of the Windows screen capture mode, which with just the press of a key we copy all the screen content to the clipboard. Thus, we can later export it as an image to any editing program, for example. As surely you have already been able to check first hand hundreds of times, this will be very useful to us. Therefore, if this functionality fails, we would have a problem. This is something that hardly ever happens, although at the same time we can use third-party solutions, as is the case we are going to talk about here.

As we mentioned before, the fact of capturing the screen in systems like Windows, is a daily as well as simple task. This allows us, among many other things, to have all the punctual content of the screen , in a photographic file, for example. We achieve this in Windows itself with just the press of a key, but there are users who demand something more in this same sense.

That is why in these same lines we are going to talk about a free application, although with paid versions, called Screenpresso . This has not stopped improving in recent years, thus bringing new functions. Thus, it is compatible with the latest versions of Windows and takes screen capture one step further. This is something that it achieves largely thanks to its own user interface , which is also quite current and pleasant to use. 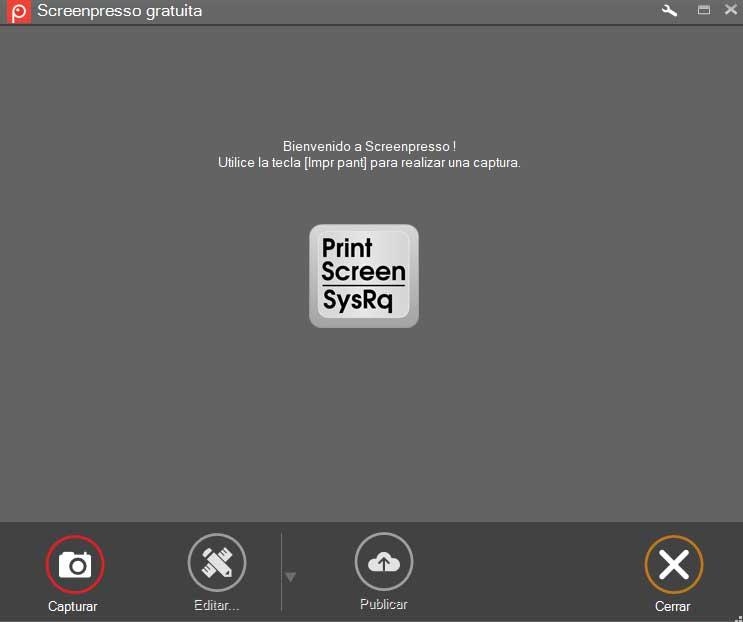 Therefore, once we have downloaded the program as such to our computer and installed it in Windows, we can use it. Say that this places a small icon on the toolbar, next to the volume or the connection of the computer. In addition, just by clicking with the main mouse button on it, the main interface of the program appears. However, if we do the same with the secondary button, we access a context menu that offers us, among other things, direct access to the program’s working modes .

As we tell you, this useful screen capture application wants to take this type of treatment one step further. To do this, it offers us a series of working modes in order to get the most out of the software . As we mentioned before, all this is something that we achieved through the contextual menu of the icon that is located on the toolbar of the program. 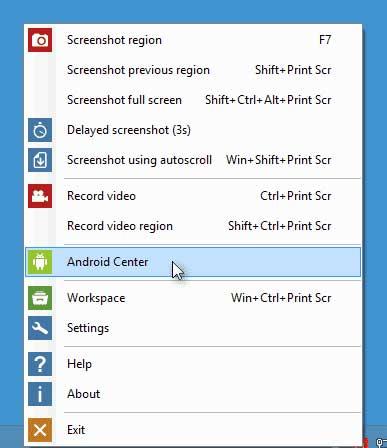 Therefore, once we access it, we find that we can not only make a full screen capture as such. Here we will see that we can also define a specific area to capture, mark a text to do OCR or optical character recognition, or make a capture with time delay.

This, as you can imagine, opens up a wide range of possibilities when taking screenshots. But it is not all that we can tell you, since Screenpresso is not limited to just making fixed captures, but also video. Thus, from its main interface, by clicking on the Capture button, we also find the option to capture a short video.

This gives us a new window from which we will have the opportunity to select the specific area on which we are going to make the recording, as well as its resolution. Thus we will obtain a video file with everything we have done on the screen from that moment.

One of the fastest and easiest systems to access the Screenpresso configuration options is through the icon that we have mentioned before. Thus, in the contextual menu that appears, we find an option called as well, Configuration . It shows us a new window with a multitude of customizable options for the application. 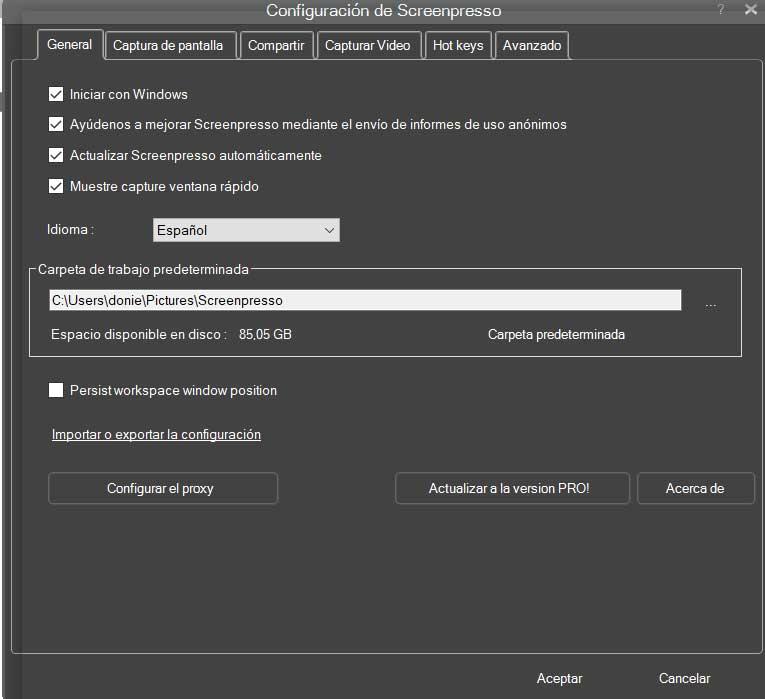 In it we will see a series of tabs that allow us to customize the capture process, the video process, the shortcuts to functions, etc. We can also tell the program to start directly with Windows, add automatic watermarks, or where to save the captures. In addition, an aspect that may be very useful for us is being able to specify our own keyboard shortcuts for the functions it offers us. This is something that we achieved from the Hot Keys section, where we find these modes, in addition to a list to indicate the shortcut keys to use. 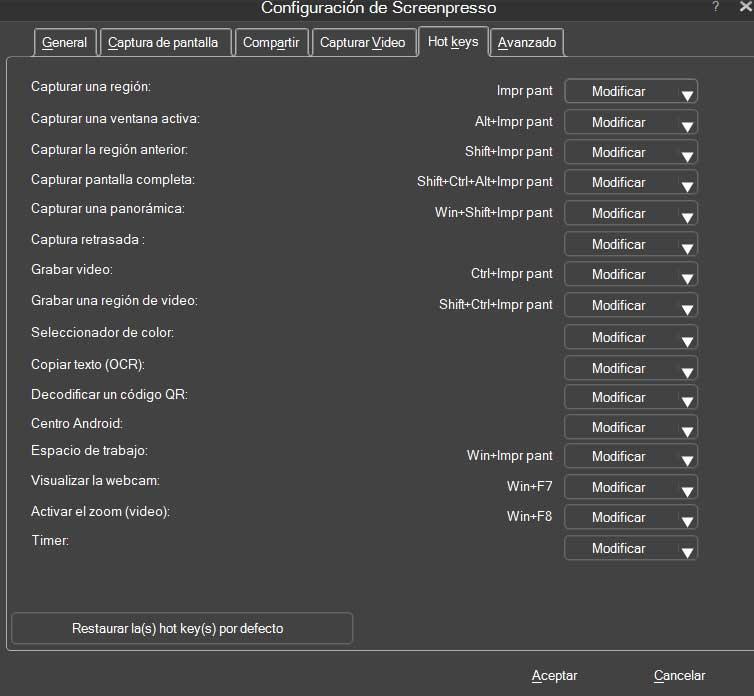 Other alternatives to capture screen in Windows

In addition to the screen capture function built into Windows itself, as we say, we can use the third-party solution Screenpresso. But this is not the only software of this type that we are going to be able to use in the Redmond operating system.

This is the case of Screenshoter, another powerful as well as simple screen capturer that offers us three modes of operation for it. If you want to try it first hand, you can get it from this link .

Similarly, another proposal of this type that we can use is PicPick, a program with which we can do it from here . It will allow us to capture and modify our own screenshots in a few steps and in a simple way.

As we have previously mentioned, Screenpresso is a free program that you can install on your Windows computer for free. This is something that we can carry out from its official website, that is, from this link . It is true that this version is full of interesting functions for Windows, but we can increase these if we wish. 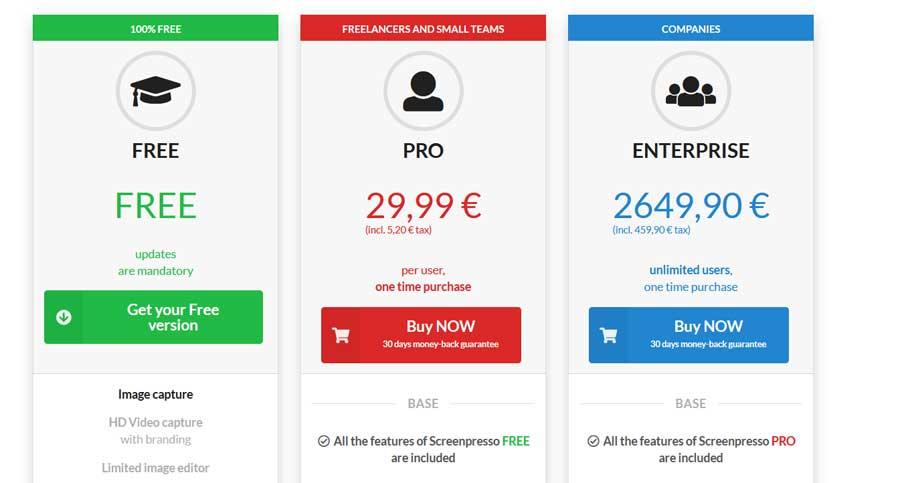 We say this because the developer of the program also proposes a version called Pro that has a price of 29.99 euros. Here it includes support for Android devices, HD quality video capture, OCR, multiple workspaces, etc; of course, for a single team. If we want these same additions but for an unlimited number of computers, the price of the program is 2649.90 euros for the Enterprise version.