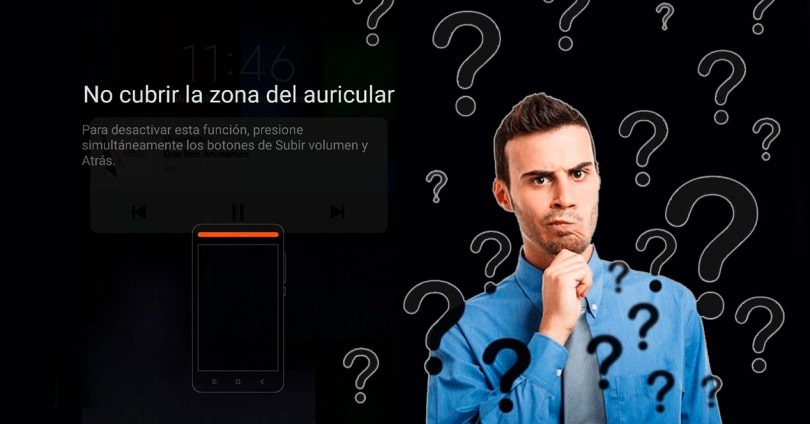 If you own a Xiaomi phone, you are likely to often come across the message “Do not cover the headphone area” or ” Do not cover the orange area of the screen “. However, although the Chinese brand is one of the most likely to show this message, it is not the only one. It is also usually replicated on other phones, especially OnePlus or Huawei, although with the text slightly changed.

What is the cause of this message? Is it possible to disable it? If so, how to do it? These are the questions that can assail all users who suffer from this message and all of them have an answer that will surely satisfy them.

What does this message mean?

It is shown because the “Pocket mode”, something that many users do not know, is activated. The purpose of this mode is to prevent unlocking when the touch screen is accidentally touched . The smartphone detects that there is a lack of space around the screen and warns its owner about it. For this, the mobile uses, on the one hand, the proximity sensor , which is located (precisely) near the telephone receiver and analyzes the amount of light that reaches the sensor; and on the other, the gyroscope , which evaluates the rotational movement of the device and detects the position of the headset. Combining the information from these 2 sensors, set the position where accidental touches will not activate the phone.

Why does the message “Do not cover the headphone area” appears?

The normal thing is that you never see this message, as it would only be shown when the phone is in your pocket. If it appears when the screen is unlocked and you are not doing anything with the terminal, it may be due to one of the following reasons: How to prevent this message from appearing on mobile

That this message appears on the mobile means absolutely nothing. Generally, the mobile will work normally and you can continue using it as before. However, if it is not your grade and you want to remove it, each manufacturer allows it.

Remove message “do not cover the earphone area” in Xiaomi

When this appears on the screen it is because pocket mode is activated from the mobile Settings. To deactivate this function, open the MIUI settings app, access the Lock screen menu and deactivate Pocket mode. On occasion , software bugs have appeared on Xiaomi mobiles related to this screen. The case of the Redmi Note 9 is known, which showed it when there is an incoming call and the phone is in the pocket. Although the error should disappear automatically as soon as the phone was picked up, this was not the case and it was necessary to wait for a software update to fix it.

Remove message “do not cover the blue zone on OnePlus”

Same problem on OnePlus mobiles and same solution. If you sometimes see a message on the lock screen that says “Do not cover the blue area”, it is because you have the pocket mode activated. In the case of mobile phones of the Chinese brand, you must open the Settings panel and select the Utilities menu. Inside you will find the button to activate or deactivate pocket mode. Delete the message on Huawei mobiles

Huawei is another of the manufacturers where this message appears, only that its configuration is much more hidden. To disable the “pocket mode” in smartphones of the brand with the latest versions of EMUI you must open the Settings app, enter the Accessibility menu and uncheck the function called Prevention of involuntary actions. And in the rest of the brands?

There are not many other brands that show this “problem” but if a similar message appears on your smartphone, search through the Settings app search for “Pocket mode” or “accidental click” and it will take you directly to the section that you must disable .