If you are an Apple user because you have an iPhone, iPad and / or Mac, you are probably interested in completing your ecosystem with a smart device to enjoy multimedia content. Without leaving the Californian brand we can find the Apple TV 4K, but there are other interesting options such as the Google Chromecast 2020 with Google TV. What are the differences between the two devices? We discuss it all below.

In design they differ a lot

The Apple TV 4K, as it happened with previous generations of this device (this is the fifth) we find a black box with dimensions of 3.5 x 9.8 x 9.8 centimeters in height, width and depth. Its weight is 425 grams and in a way it can even remind us of a CPU like the Mac mini. Its way of connecting to the television is through its corresponding HDMI cable, while another outlet must go to the current because this device requires its own power. It should be noted that it is only available in black. 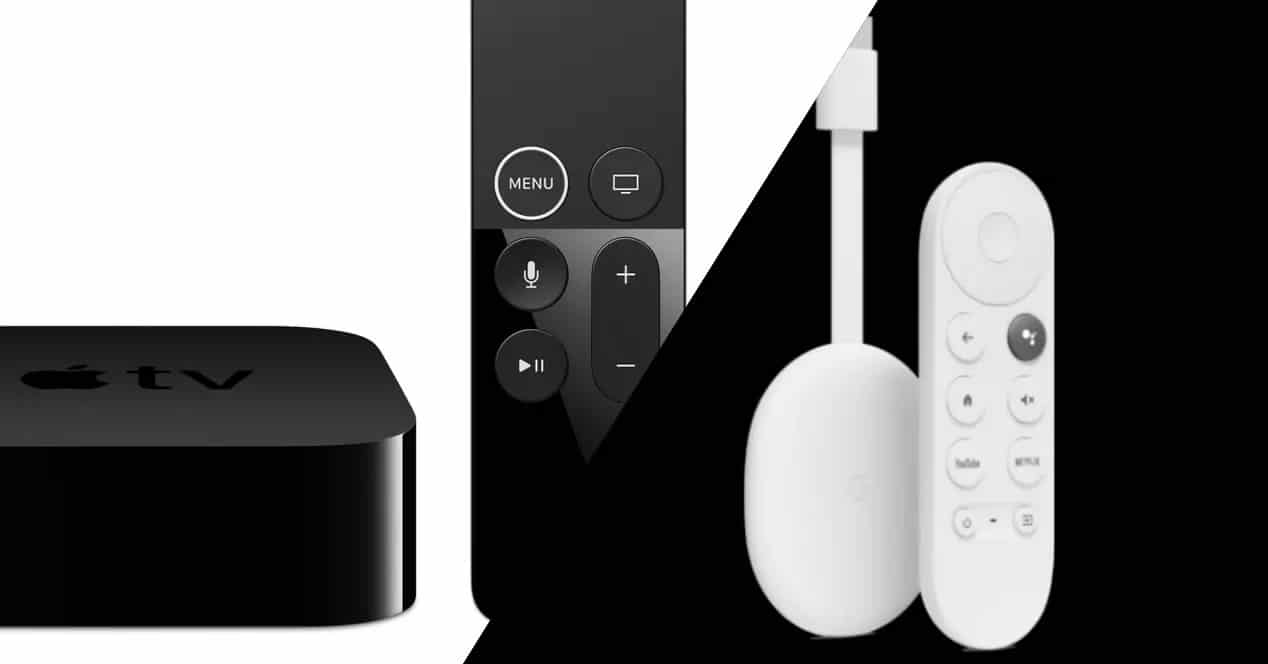 The Google Chromecast 2020 for its part is totally different, since it starts from a much more portable design thanks to its dimensions of 1.62 x 0.61 x 1.25 centimeters and a weight of only 55 grams. Visually they are undoubtedly two totally different worlds, with a design in this case rounded and small with a USB-C connection and a cable that comes out of the body of the Chromecast and that works as an HDMI output. 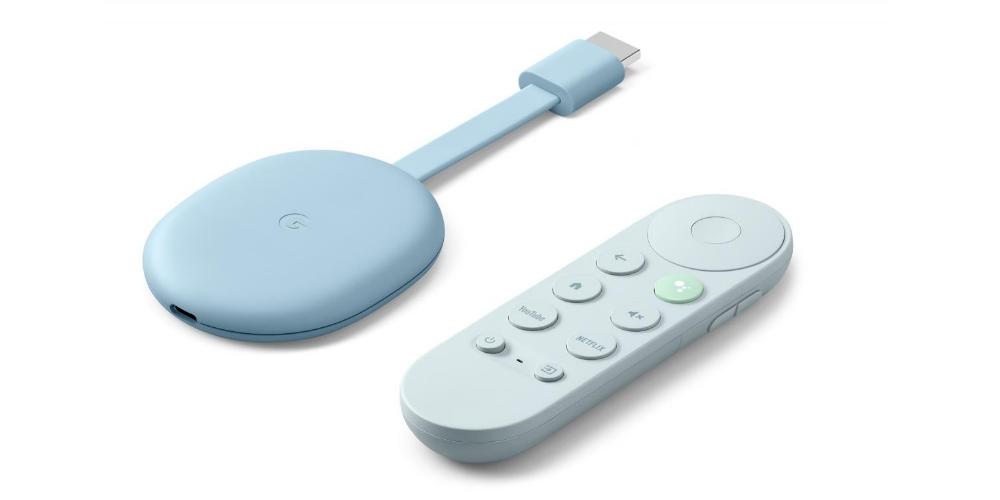 We start talking in this case about the Google Chromecast, which is equipped by Google TV, which acts as the brain of this device. If it is true that you have a dependency on an iPhone to perform the initial configuration such as data from the internet network. Once this process is done, you can choose the different applications that you want to install to enjoy all the content. For example you can add Prime Video, HBO or Filmin. All of these appear on the Chromecast’s home screen and can be run through the included remote.

The interface itself will also show a series of movies and series that can be viewed on the Chromecast. These can be extracted from the services that we have installed through applications or rented from the Google store itself. Added to all this is the integration with Google Assistant as a counterpart to Siri on tvOS. The goal in the end is the same and is to be able to control the device through voice commands. The only negative point that it has is that it is not possible to carry out an adequate management of the profiles. And of course, the essential philosophy of Chromecasts of sending content directly from the mobile itself is maintained. 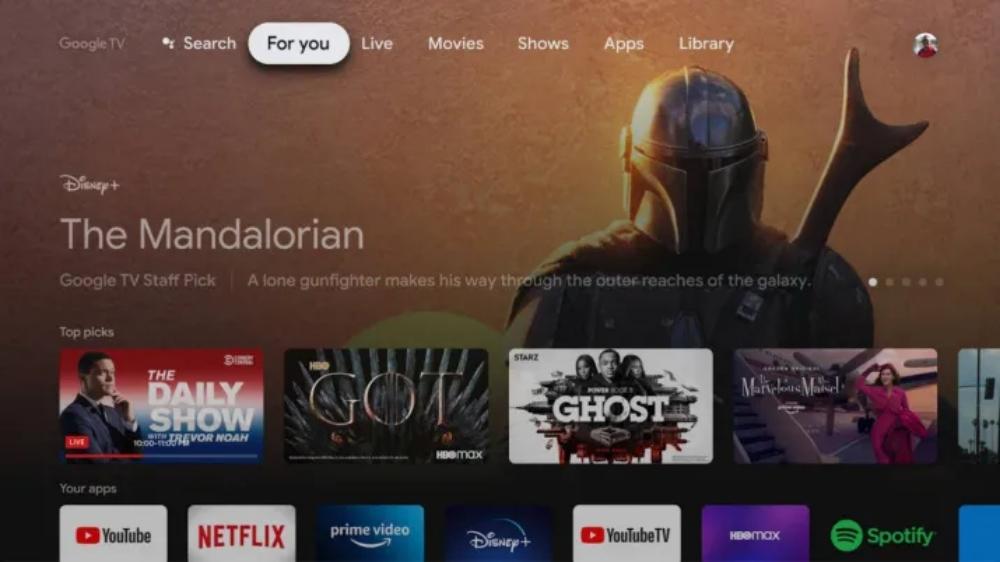 The Apple TV for its part brings tvOS, its own operating system that Apple designs and that does not look at all like iOS or macOS, although it shares certain things. Its interface is designed to be handled comfortably with the remote, with the applications installed in the main view and even having multitasking in which it does resemble the iPhone.

Taking into account that in the end the appearance of the software is something very subjective, we cannot classify any of the systems as better or worse. Both are definitely useful for what they are focused on, which is nothing more than enjoying multimedia content such as videos or even music. 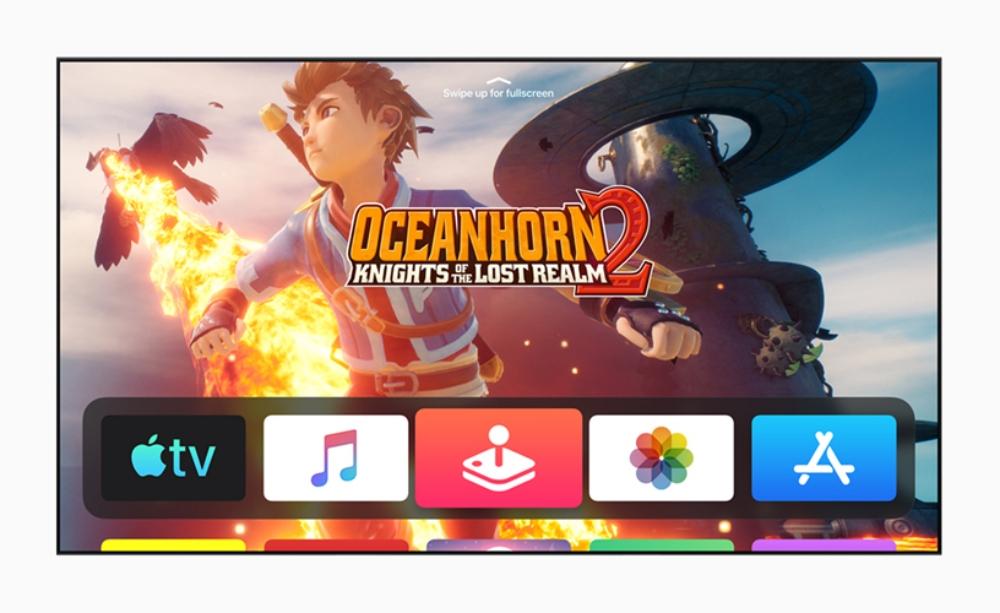 Here we find a tremendous similarity between both teams and that is that the Siri Remote, which is what Apple calls its command, is very similar to the command of the Google Chromecast. Or maybe we should say it the other way around because the Apple TV is the first to arrive. In any case, both are functional and fully adapted to its interface.

In the case of the Siri Remote, it has always been blamed for being unintuitive, although in the end it goes for tastes and once its learning curve is overcome it is tremendously easy to use. In some televisions it can even serve as the main control to vary the volume of this or to zap between television channels when you are not in the tvOS interface. Something to keep in mind if the remote is lost is that an Apple TV control function is installed as standard on the iPhone and iPad with a similar appearance to the remote itself. 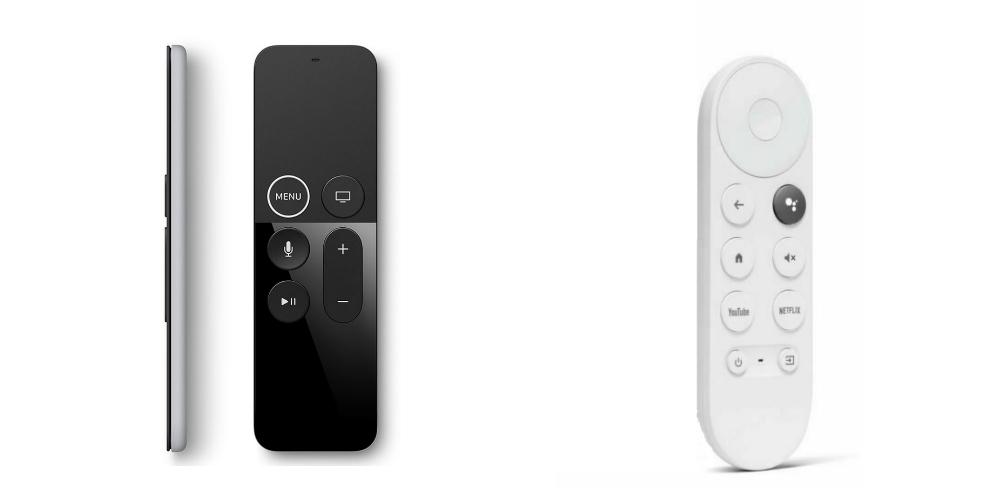 As we have commented, the Chromecast also integrates its own control and although it has its similarities, it ends up being more complete than that of the Apple TV because it has different direct access buttons. This means that in addition to being able to move through the different applications and run them, you can also quickly access applications such as YouTube or Netflix. It also has a shortcut to mute the sound or return to the main menu to change the content you are viewing.

Both the App Store of the Apple TV and the Google Play of the Chromecast are scarcer than those of iPhone or Android phones. However, they seem to have a large enough catalog for that device, from cool games to pass the time to the most popular video platforms like Netflix, HBO, YouTube and more. Therefore, for these purposes, we do not find notable differences, although we will expose those that do exist in the next section. 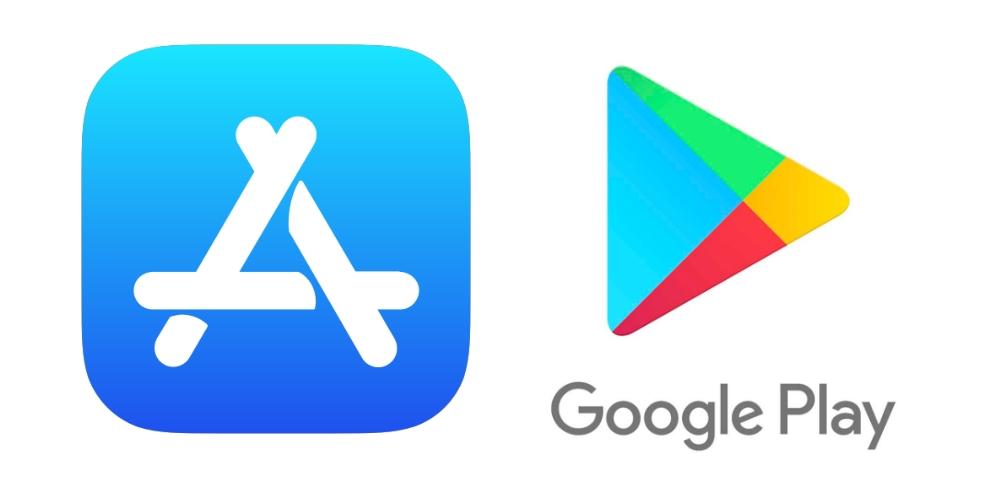 In 2019, Apple TV + and Apple Arcade, the company’s new streaming platforms for television and video games, were officially launched. While it is true that they are extended to other devices that are not the brand’s, they are not yet available in the Google Chromecast 2020 (at least at the time of publishing this article). If you are a subscriber of one or both services and you opt for the Google device, you will be deprived of its enjoyment.

The iPhone is possibly one of Apple TV’s greatest allies. The ability to duplicate your screen on the monitor you are connected to is a highlight, as is sending content via AirPlay. However, the most interesting possibility comes with something already mentioned above and is the possibility of having an app on the iPhone that exercises control of the device. This is especially useful when searching with text, being more comfortable writing through the mobile. 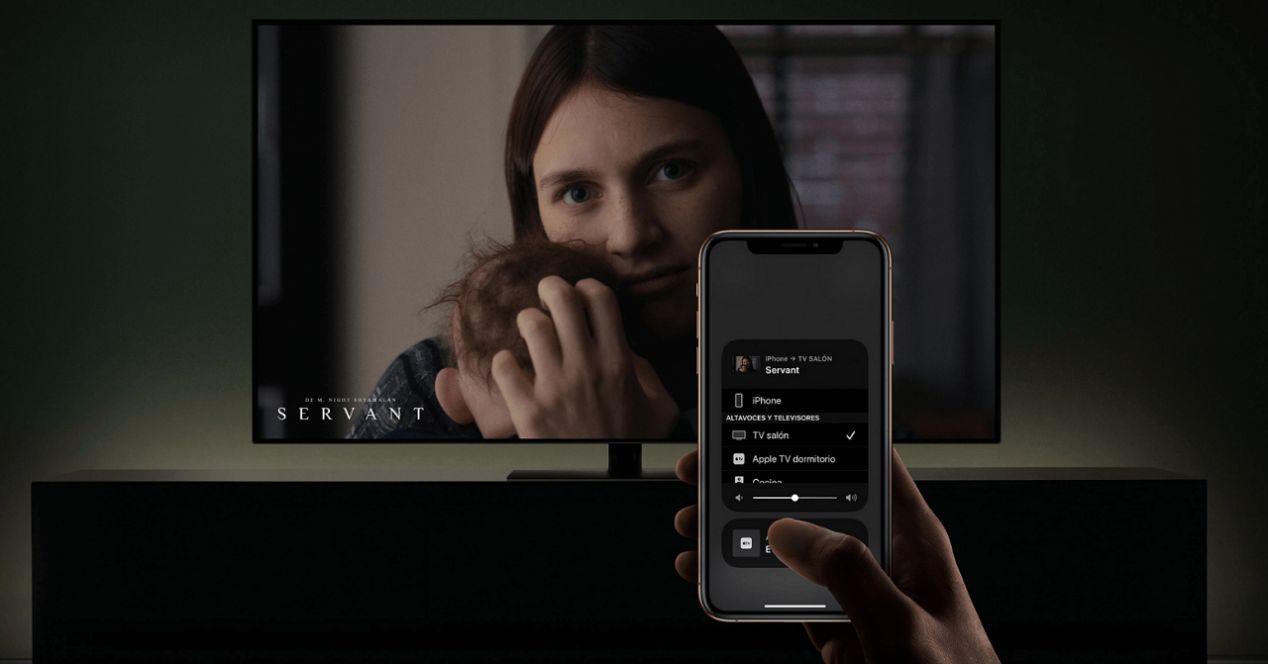 If we talk about the Chromecast, despite being a device that is not within the Apple ecosystem, the iPhone can be used to perform the initial configuration through the Google Home application. Once this is done, you can forget about the device since you will not need to have control with the remote control that is included as we have commented previously. But what is maintained is the essence of the Chromecast that has been dragging through all the generations that exist today.

As within the Apple ecosystem you can send content through AirPlay to Apple TV, there is a similar system in the Chromecast. You will be able to share content through a characteristic button that is available in numerous content broadcasting applications such as Netflix or YouTube. In this way you can have a much more exhaustive control over everything you view with this device on your television.

Whether they come from Apple Arcade or video games from the App Store, the Apple TV supports different controls with which to enjoy a game. All those that already have the MFi certificate included will be compatible, but it also allows connecting a wireless controller of various video consoles such as Xbox One, Xbox Series X PlayStation 4 and PlayStation 5. Of course, for those of those new generations of Microsoft consoles and from Sony you will need to have tvOS 14.5 or later installed.

In the case of the Chromecast 2020, the possibility of connecting to console controls such as those for PlayStation or Xbox is also included. These will be designed to be able to take advantage of Google Stadia, the brand’s video game service. To this is also added the possibility of making the connection with the control that owns Google itself and that also has the purpose of using Stadia.

Connection with accessories such as headphones and speakers

The Apple player has Bluetooth 5.0 technology, which makes it possible to connect all kinds of wireless sound accessories that have this connectivity, whether they are speakers or headphones. Something outstanding is the possibility of connecting up to two pairs of headphones at the same time, although it must be said that when it comes to the speakers there are some other drawbacks with the HomePods. They are compatible but this speaker cannot be assigned as the default of the Apple TV, something incomprehensible being two products of the same brand. 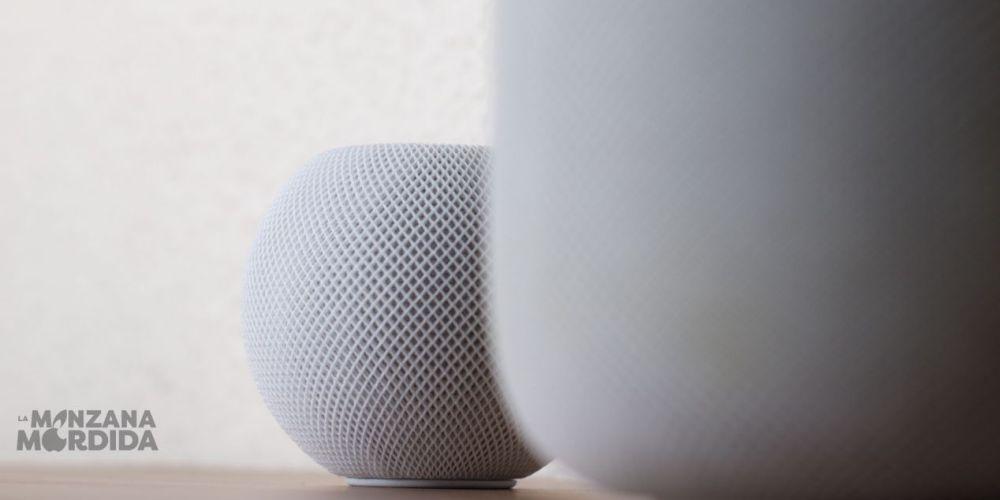 The Chromecast 2020 has a Bluetooth 4.1 connection, which despite being inferior to that of the Apple device, does allow you to connect different accessories. Here the use of console controls stands out above all to be able to enjoy the games that are integrated with Google Stadia or with different wireless headphones. But unlike with Apple TV, it is not possible to make an easy connection with different speakers as it does not have a technology similar to AirPlay 2. There is only the possibility of connecting the Chromecast to the Nest speakers, something ideal when using Spotify to have music throughout your house if you need it.

The Chromecast can be connected to the TV or projector via high speed HDMI. This means that 4K resolution is supported so that you can enjoy the content at the highest possible quality. This is obviously possible as long as you have a device that is compatible with this resolution, otherwise it will be rescaled downwards. 4K is not simple, but HDR technology is also integrated to give colors a much more realistic intensity.

The Apple TV already carries in its own name the resolution it supports: 4K. In this case it is possible to connect it to monitors, televisions and even projectors as well, although obviously these external elements must be compatible with 4K resolutions to be seen in that definition. The way to connect it is also through an HDMI cable that, by the way, is not included. Therefore in the end we find similar specifications in this regard. 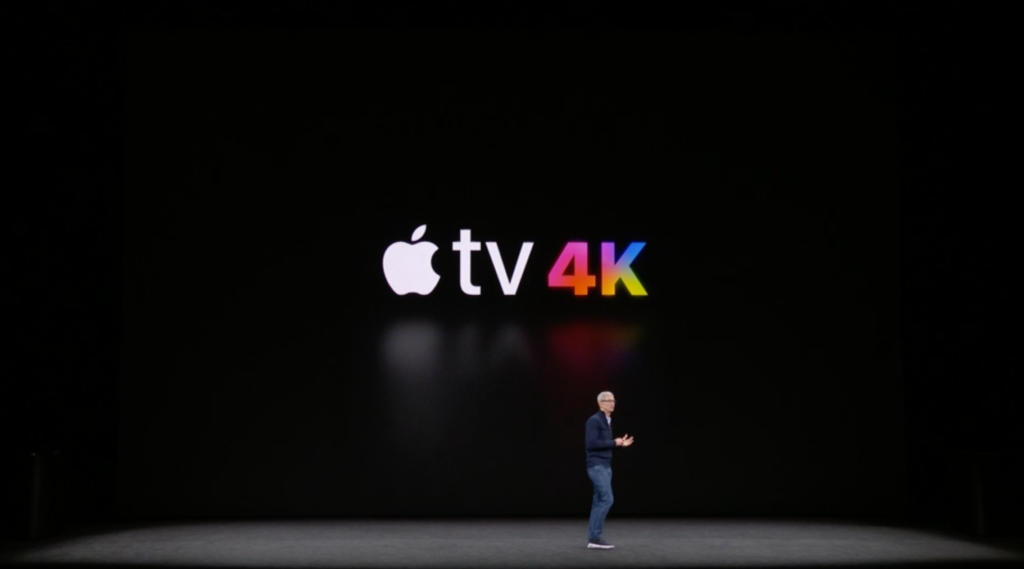 The price difference can weigh a lot

If, despite the fact that the Apple ecosystem is an important point for you, you prioritize saving money, the balance will probably end up unbalanced if we talk about the price of the devices. The Apple TV 4K costs 199 euros in its version with 32 GB of storage, while the 64 GB version amounts to 219 euros .

The price of the apple player may be more or less fair, but if it is compared with the 69.99 euros that the Google Chromecast 2020 is worth, we see a really big difference. If we understand that in the end they are devices focused on similar functionalities, the latter will probably end up being more worthwhile. In any case, it will be your decision to put the strengths and weaknesses of each one on a scale.