Many of us curious about hardware wonder what the next step in the evolution of PC RAM will be . We currently have DDR4 and DDR5 is just around the corner and yet, for some years now, PRAM memory , also known as PCM or phase change memory, has been working on it. In this article we are going to tell you what it is, how it works and what its characteristics are so that it can become the substitute for RAM as we know it.

As you know, in modern computing the binary system is used to manage data, ones and zeros. These ones and zeros can be represented by letting go or not letting energy pass or in many other ways. As you will already assume from the name, this type of memory bases its operation on being capable of phase change, or more specifically of changing the physical state of the matter of which it is composed. What is phase change memory (PCM)?

This type of memory, also called PRAM, PCRAM or PCM (Phase Change Memory) is a type of non-volatile memory , which means that when we turn off the PC or there is a power outage, it does not lose the data it contains, with the advantages what this would represent for a PC, such as ultra fast reboots or re-opening everything exactly as we had when turning the PC off and on.

Standford Ovshinsky explored the properties of chalcogen glass and its storage potential in the 1960s, and Gordon Moore (co-founder of Intel) himself published an article in Electronics magazine in 1970 about this material. The peculiarity of this material, made of amphigen, is capable of being in two states: crystalline and amorphous , being able to change by means of heat. Thus, it is capable of representing the ones and zeros of the binary system, being valid for modern computing.

The two states of chalcogen glass possess an extremely different resistivity that forms the basis of information storage in the binary system. The amorphous state has high resistance and represents zeros, while the crystalline state has low resistance and represents ones. A curiosity is that this material is also used in CDs and DVDs, only in that case its optical refractive properties are manipulated and not its resistivity.

When can we expect the arrival of PRAM memory?

PRAM has not yet reached its commercialization stage, although practically all the existing prototypes use a chalcogenic germanium, antimony and tellurium alloy called GST. It is heated to temperatures of 600ºC to liquefy the chalcogen, and after that it is frozen to adopt an amorphous vitreous state of high electrical resistance. By heating above its crystallization point but below its melting point, it transforms into a crystalline state of much less resistance.

This phase change process can be completed in as little as 5 ns (according to a 2006 Samsung patent), a time comparable to that of volatile memories such as DRAM, whose times are on the order of 2 ns. The problem is that they are still looking for ways that this change in temperatures can be implemented on a PC, so there is no date set. 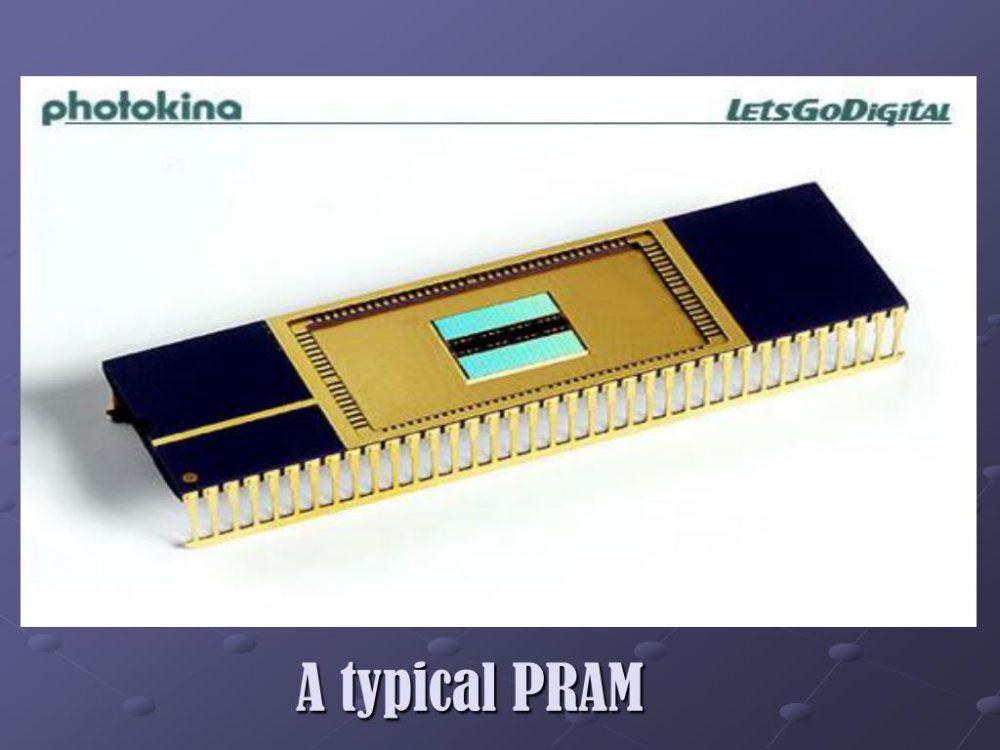 Nanochip licensed all PRAM-based technology for use in MEMS (microelectromechanical systems) in 2004 and, in fact, all the images you see of PRAM including the one above, are from its products.

In 2006, Samsung announced a 256 Mb device that used diodes, which at that time meant a huge density compared to the existing DRAM, and was the main reason for it to be proposed as a substitute for Flash memory. The prototype presented had a 46.7nm core that is better than any of the DRAMs on the market. In any case, everything was there and nothing has been heard from Samsung since then.