Although it may seem that the industry has gone crazy, the reality is that PCIe standards are advancing at breakneck speed. It’s all due to the delay with the release of PCIe 4.0, which was more than six years late compared to PCIe 3.0. Thus, in 2019, PCIe 5.0 was announced, which is already available on the first 12th generation Intel motherboards. However, we will soon see boards with PCIe 6.0 for even better performance.

The advancement of PCIe standards is something that benefits all users. The higher its speed, the better the performance that the devices that we connect can achieve, since the available bandwidth is greater . Thus, a graphics card can achieve higher performance, an SSD can be faster, and the processor and chipset can handle connected devices with lower power consumption. PCIe 6.0 doubles the bandwidth of PCIe 5.0. The standard supports up to 64 GT/s , which is equivalent to 256 GB/s in a 16-lane configuration. To achieve that speed, the standard will make use of four-level Pulse Amplitude Modulation , or PAM4 , as well as a new flow control and packet management system. 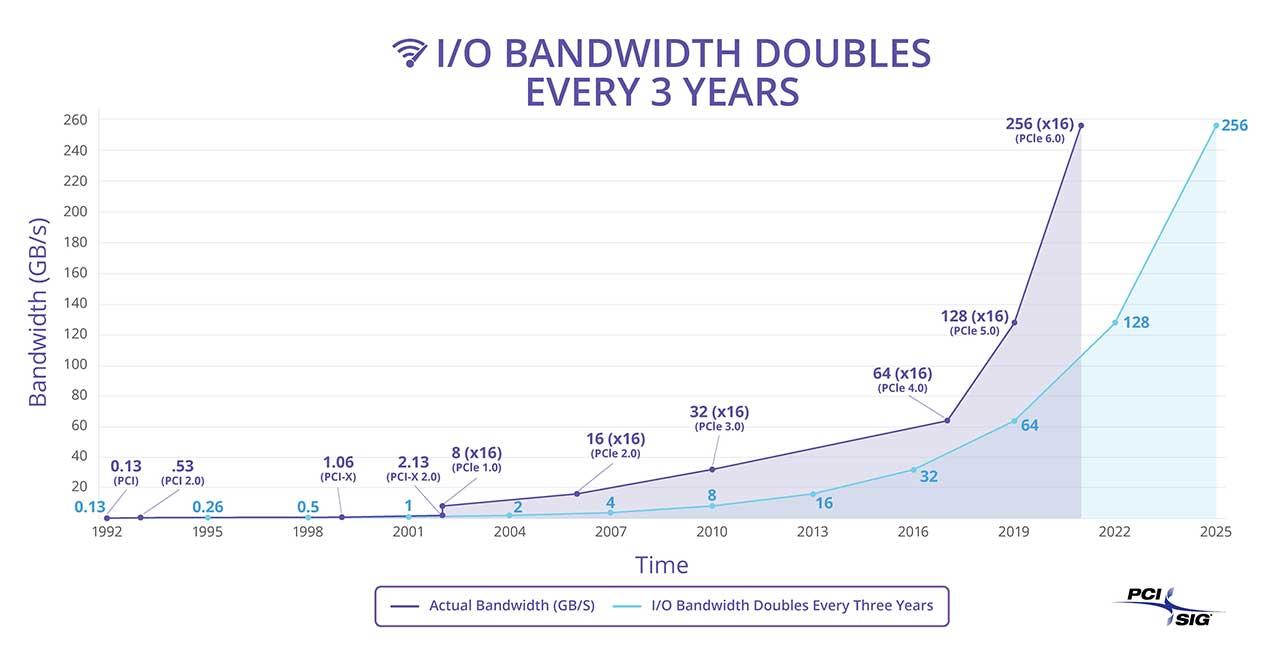 As is often the case when a new PCIe standard is announced, the PCI-SIG claims that it will first reach computers located in data centers , which handle huge amounts of data every second. From there, it will permeate devices for individuals. However, we will have to wait until at least 2023 or 2024 to see the first Intel or AMD processors and boards compatible with the standard.

Currently, all graphics cards on the market support PCIe 4.0, and there is no advantage to using PCIe 5.0. However, just like 4.0 and 3.0, using a current card on a PCIe 3.0 board can cause some performance loss due to bandwidth issues.

The only devices that we find fully compatible with PCIe 5.0 , and that manage to take advantage of this standard, are SSD drives . Samsung, ADATA and other companies that manufacture storage devices have already demonstrated the spectacular performance that the PCIe 5.0 SSD units that will arrive this year will have, reaching figures of 13,000 MB / s , compared to just over 7,000 MB / s that are achieved with PCIe 4.0.

Therefore, it would not be surprising if the first PCIe 6.0 SSDs reached speeds of 25,000 MB/s , which is faster than the speed reached by DDR3 RAM almost a decade ago. Looking ahead to PCIe 7.0 , we could find SSDs as fast as the DDR4 RAM used by most computers today.

In short, it seems that the PCI-SIG has set out to launch a new PCIe standard that doubles the bandwidth of the previous one every three years. PCIe 4.0 was announced in 2017 and the first boards using it arrived in 2019. PCIe 5.0 was announced in 2019 and the first boards have been released in late 2021. So with PCIe 2.0 being announced now, we should see the arrival of PCIe 4.0 cards. first boards in late 2023 or early 2024. Regarding PCIe 7.0, we will have to wait until at least 2025 for its announcement.