Yes, the PCI Express 7.0 specification has already been released and therefore future chip designers will be able to use it. The seventh generation of PCIe arrives when there are not even products that use the fifth. Furthermore, we currently do not know which processors from Intel and AMD will support PCI Express 6.0 as of today. So there are still many years to go until we see products with PCIe Gen 7. However, what interests us are the specifications and how it could change the way we understand the hardware of our PC.

There is no doubt that PCI Express is the longest parallel interface, with the ability to send and receive several bits at the same time, in the history of computer hardware and its life will be long with the appearance of version 7.0. Which has just been presented by PCI-SIG, the consortium of companies that are responsible for agreeing on the specifications of the different versions of PCI Express. In such a way that there is full compatibility not only between the different components and power supplies that use this interface to communicate with each other. What does PCI Express 7.0 bring us new?

The seventh generation of the PCI Express standard will continue the tradition of doubling the bandwidth compared to the previous one. In this case, it will be able to reach 512 GB/s of bandwidth transmitting data in both directions in a x16 configuration, typical of a graphics card. At first glance it is an evolution of PCI Express 6.0 and like this it will use PAM4 encoding . This consists in that instead of encoding a value 0 or 1 for each sending pin, they can encode the values 00, 01, 10, and 11. This means that the bandwidth can be doubled without increasing the clock speed through of simple voltage variations. However, as with Gen 6, Gen 7 also maintains backwards compatibility with previous versions of the standard. 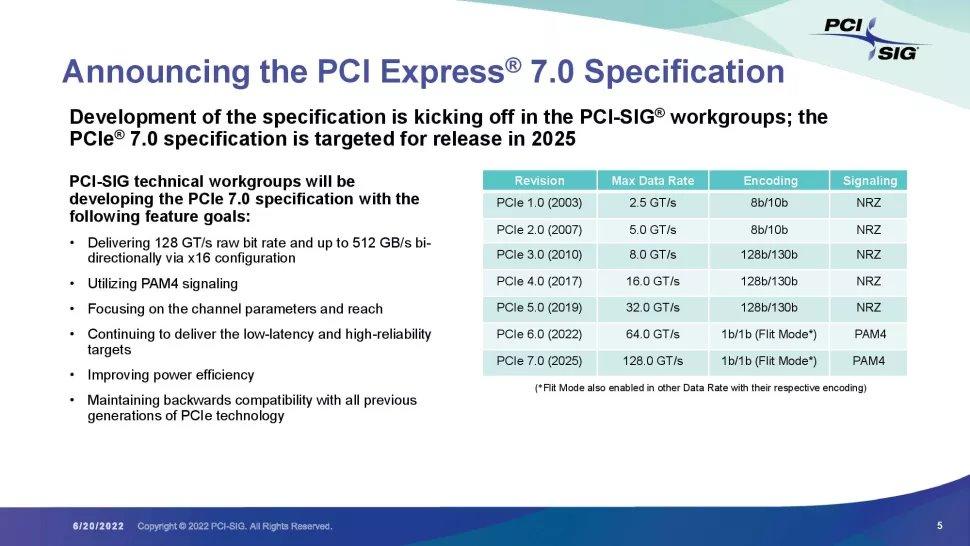 We have to start from the fact that, as happens with memory interfaces, peripheral interfaces are located on the perimeter of the chip and, therefore, in the outermost part of them. It is important that the specifications are available several years in advance so that they can be built and that the different manufacturers can implement them in their designs. There are still three years left until we see the first PCI Express 7.0 interfaces integrated into the chips that our PCs will mount. So for the moment it is still a promise on paper.

Why might it change the way we know about PCs?

One of the extensions of the PCI Express 5.0 standard that will be implemented in future extensions is the so-called Compute Express Link. Which allows all PCI Express devices to share the same addressing in terms of memory. In a simplified way, this means that in the future we will be able to expand the RAM memory of our PC from the PCIe slots, which will render the classic DIMM slots completely useless. What’s more, with bandwidths of 256 GB/s and 512 GB/s it will be more than enough for most computers.

So at some point, we could see a new memory standard that uses PCIe ports, we may even see RAM expansion modules in M.2 format as in NVMe SSDs. In any case, the next safe step is to unify the addressing of the SSD and RAM. As well as taking the flash controller inside the processor, as happened with the RAM memory back in the day. These are two very similar pieces, after all, and the high speeds of PCI Express 7.0 could make that transition easier.