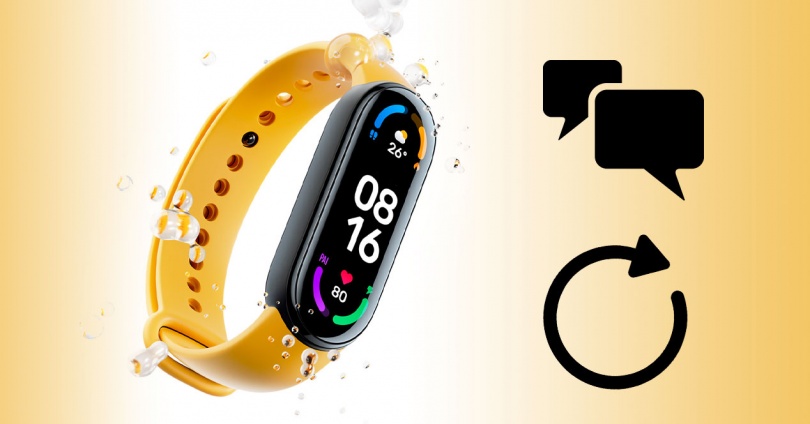 With the presentation of the Mi Band 6, an option that users had been dreaming of for a long time and it is none other than the possibility of answering messages from the bracelet . This option was one of the biggest claims, but nevertheless it did not come standard with the Xiaomi smartband and as on other occasions it has happened, it is an update that is in charge of bringing it.

Despite the fact that this option is not available as standard, the benefits of Xiaomi’s sports bracelet have helped it to expand throughout the world and I have even reached Spain. After the development of that option, it is now when from China we know that the long-awaited update for the Mi Band 6 has begun to be implemented and that therefore we will soon be able to enjoy the option.

An update that starts in China

For the function of answering messages to begin to be operational in the bracelets, it is necessary that the firmware update with version number 1.0.1.32 arrives in our country, just like the Mi Fit app must be updated with version number v5. 1.0. For now, the only country where it has been possible to start enjoying the possibility of replying to messages is China, but taking into account that there are no complementary ROMs as there are with smartphones, sooner or later we can receive the option. It has not been possible to see images of how the option to respond to messages will behave on the Mi Band 6 , although it is expected that you will have the option of using it in a complementary way with SMS and WhatsApp because it is the leading messaging app in Spain. It is not known if it can also be used together with Telegram, it is something we will have to wait for. What remains in doubt is whether other previous versions such as the Mi Band 5 will also acquire this functionality.

How it will work and other news

Given the limitations of the Xiaomi smartband on its screen, size and possibilities, we will not be able to write any message from the bracelet, but there will be predefined quick responses on the Mi Band that we can use to warn that we are doing sports and we will respond later, among many other examples that you can come up with. The update for the bracelet also brings with it other important new features such as improvements and bug fixes, in addition to incorporating the Pomodoro function that helps us better organize our time and tasks. There are also changes in sports practice, as we will be able to set pace goals both running and cycling.