Windows 10 is currently the world’s most widely used operating system for desktops. But this is not the only Windows that we can use at the moment, there are other previous ones. In addition, to this we must add that there is not only one version of this specific operating system, which can be a bit confusing.

To say that Microsoft itself has been offering its millions of users the operating system we are talking about for several decades. Over the years it has grown and evolved according to the most current technologies. In fact, this is something that continues at the moment, but all this already focused on Windows 10 . And is that for the firm of Redmond this system is more of a service than a system like the previous ones. Hence precisely that it is improving based on updates, instead of another Windows, as it did in the past. It may be the case that among all those versions of Windows, we don’t really know which one we use, or which one is the most recent. That is precisely what we will talk about next.

Old versions of the operating system

At the moment, if we do not work with Windows 10, it is possible that we will do it with Windows 7 , 8, 8.1, or even XP , although the latter is practically disappeared. At the same time we must bear in mind that Windows 7 no longer receives official support from the firm. This means that you no longer receive updates of any kind, at least for free.

That is why in this case it is recommended that we begin to seriously think about migrating to another system with support such as Windows 8 or 10. But at the same time, what may generate more doubts is the version that we have in Windows 10 , or if it is the last one. This is largely due to the fact that, as we are going to see below, there are several versions of Windows 10 that we can have. In addition, the names Microsoft chooses to differentiate them, does not always help.

What version of Windows 10 do I have on my PC

That is the most recent that we can enjoy right now on our Windows 10 PC, all waiting for the first of 2021 that will arrive in a few weeks. If you are curious to know the exact version of the Windows 10 system that you have installed, you can find out through the Winver command. You can type this directly into the search box on the taskbar, the one located next to the Start menu. 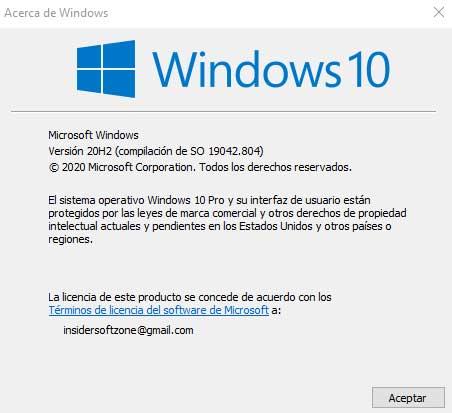 So we can quickly and easily see the version that we have at that time. In addition, knowing the available versions of the operating system , we will know instantly if we are updated or not.