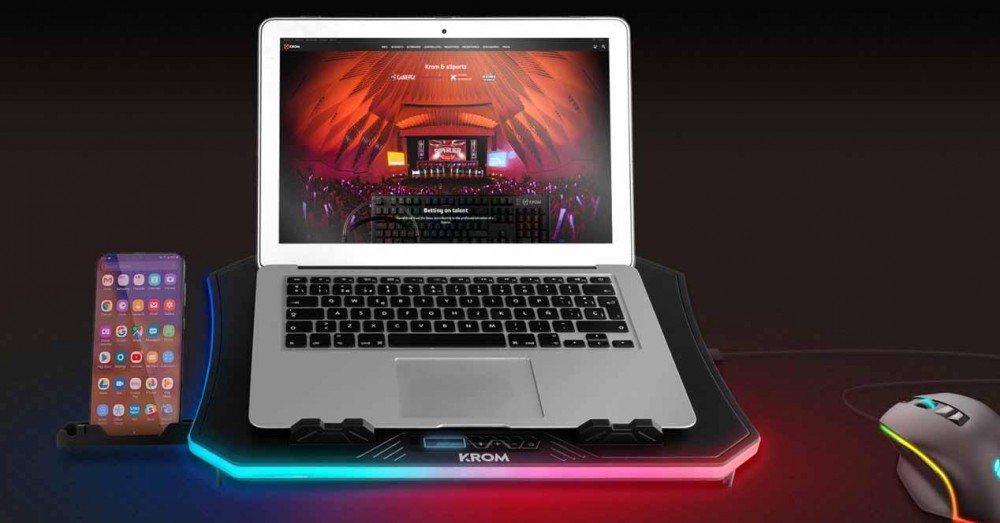 Many times you have read about laptop cooling bases , an accessory that promises to improve the operating temperature of the device. However, there are many users reluctant to use it because they are not convinced of its usefulness or they think that it is a “useless junk” that in the end is useless; In this article we are going to tell you what a laptop cooler base is, what feature it has -or should have- and why you would need one for your laptop.

Until not so long ago, cooling bases were based on a mere grate base with a large fan underneath, and certainly some were so extremely poor quality that they did not do much more than make noise; However, things and technology have changed and today a good cooling base can make a big difference, both with respect to the user experience and the performance of the equipment, although it is difficult to believe.

What is a refrigerator base and what characteristics does it have? 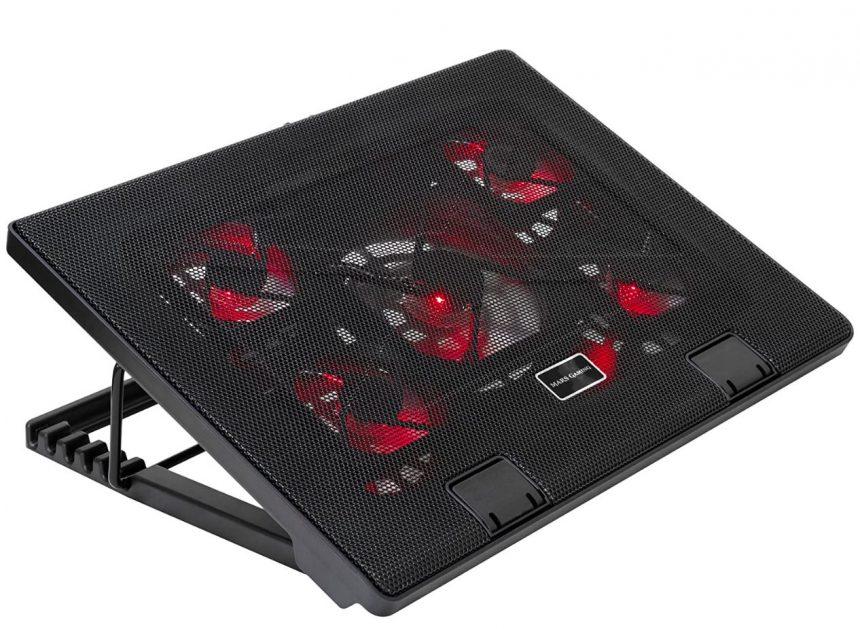 A cooling base, as its name suggests, is a base on which to put the laptop on top and that incorporates one or more fans strategically placed to coincide with the air inlets and outlets of the laptop, helping greatly to maintain a good temperature. . For this reason, the cooling bases must necessarily have vents so that the air from the fan or fans can circulate and reach the laptop.

Taking advantage of the fact that we are facing a “base” as such, most manufacturers also take advantage of this element to improve the ergonomics of use in laptops, so that the base is much more than simply adding fans to promote cooling.

For this reason and as you can see in the example image that we have put above, they generally have a hinge and supports that allow raising the back so that it is diagonally, so that when placing the laptop on top it remains in a much more comfortable position. Obviously, if the cooling base has this possibility, it must also have some stops at the bottom so that the laptop does not slip and stay fixed in place.

In addition to this and since all the cooling bases are powered by USB, the vast majority also incorporate a USB port hub (in many cases USB 2.0 but in the higher-end models they are USB 3.0) so they also serve to expand the connectivity of the computer, since in fact most modern laptops do not have too many USB ports available.

Finally, in the era of ” RGB lighting ” in which we live, many cooling bases also precisely incorporate RGB lighting in order to adapt to the gaming aesthetics that many PCs and laptops have today. In most cases, unfortunately, this lighting only allows you to choose the color and effects or turn it off, but there are no models that integrate with the lighting ecosystem of any manufacturer.

Why would you need one for your laptop? 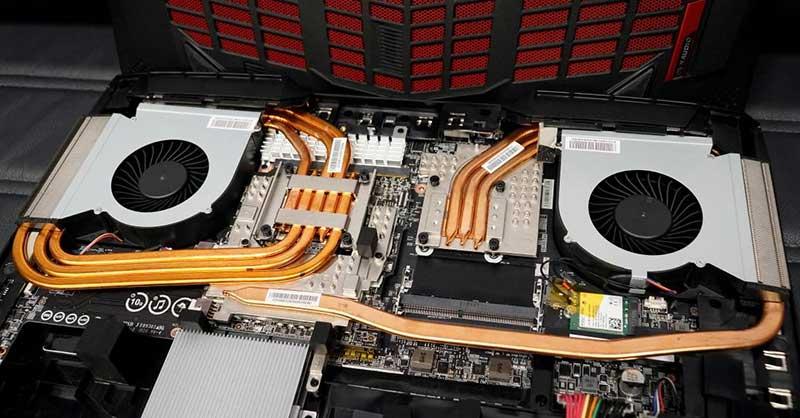 Laptops, and especially those geared towards gaming, are equipped with powerful enough hardware to deliver great performance, and this necessarily entails higher consumption and heat generation. If we take into account that this powerful hardware is packaged in a small laptop (and especially in terms of its thickness), it means that the cooling system it has is generally quite inefficient and noisy.

Having a cooling base with good fans serves, in most cases, to greatly reduce the operating temperature of the laptop since it will be promoting air circulation. In addition, although it seems counterproductive because we are actually adding more fans, it will also help make the system quieter because despite adding more fans, they will rotate more slowly when the computer is at a lower temperature. And you know, if the equipment is at a lower temperature, it will have a longer useful life and, in addition, performance will be improved because thermal throttling is avoided.

In addition to this, having a cooling base also serves to maintain a more ergonomic posture when using the laptop, it can add more connectivity with the USB port hubs and in some cases even improve the aesthetics with RGB lighting (for those who He liked me). In short, using a cooling base in a laptop and especially if it is powerful only provides advantages, which is why it is highly recommended.

What to look for when buying a refrigerator base 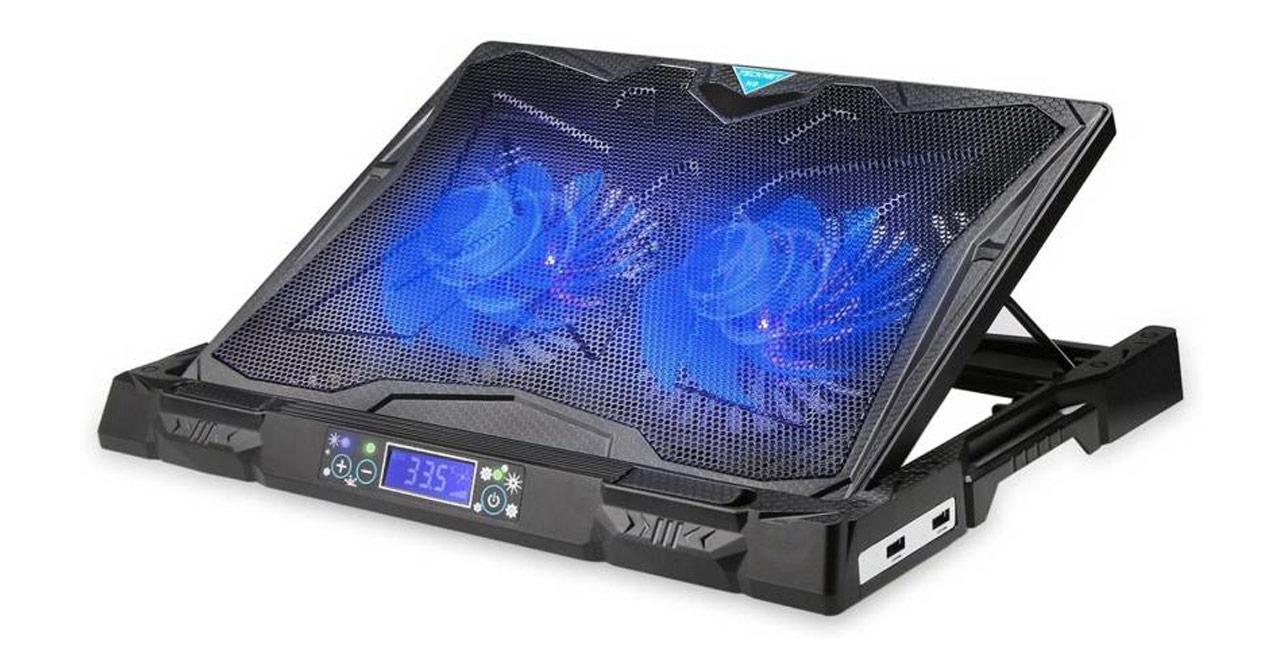 You must take into account one essential thing, and that is that not all laptops are designed the same and perhaps where one model has an air inlet, another has an outlet. Therefore, it is important that you pay attention to the location of the vents on your laptop to know whether or not you should turn the cooling base fans over so that they put air in or out according to the laptop’s inlet or outlet. of air respectively. Similarly, you should look at the position of the vents and choose a cooling base that has the fans positioned to match these vents.

Another thing to keep in mind is that the larger the cooling base fans, the greater the airflow they will be able to move by rotating more slowly and, therefore, emitting less noise. It is generally more effective and quieter to have a single 200mm fan than two 120mm fans, for example.

In addition to that, we recommend that you look for cooling bases that have a USB 3.0 port hub (most of them are with USB 2.0), since this will take advantage of this to improve the connectivity of your laptop. Apart from this, we also recommend that you choose a base that allows height adjustment, since this way you can improve ergonomics when using the laptop.

In any case, the use of a cooling base is highly recommended, especially if the laptop is powerful and generates a lot of heat. It can be uncomfortable to carry the base from one part to another with the laptop, but if you are one of those who always use it in one or two physical locations, it is definitely worth it.