Why use a keyboard on iPad?

It has rained a lot since Steve Jobs presented the first iPad on January 27, 2010. Since then, tablets in general have changed a lot and those of Apple in particular have ceased to position themselves as a kind of large iPhone to accommodate as a great hybrid between this and a computer. But for this, various factors intervene, such as the use of a keyboard.

Fortunately we can find a wide range of keyboards compatible with iPad , being virtually compatible any of them that works with bluetooth. At Apple we find the Smart Keyboard and the Magic Keyboard for iPad that even include a trackpad. These are in a case format, so they clearly differ from completely external keyboards and can be used on any surface and at a greater distance from the screen of the device. 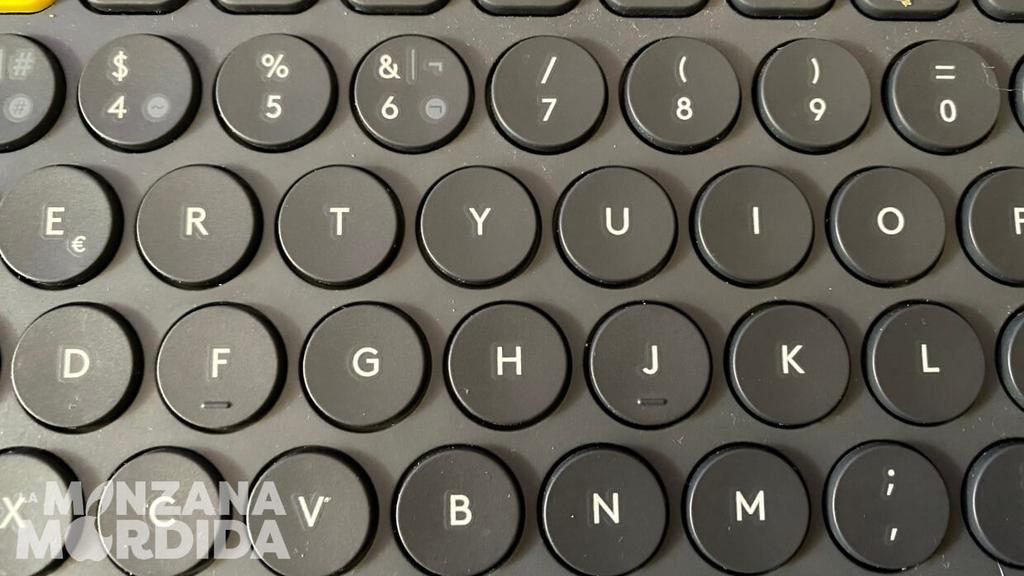 If you usually write with the iPad , either through social networks or professionally or at school, it is possible that the on-screen keyboard is uncomfortable. Not because of the strange feeling of typing on a digital keyboard, but because you also lose much of the screen because of the appearance of it. This is where the chance to find a keyboard wins. It can also be combined with a separate mouse or trackpad, although that is another story.

The iPadOS operating system is fully prepared to be used with a keyboard, either in this way. Even in previous versions, when it was iOS, it already was. Therefore you will not be including a strange component to your device, since from its first configuration you will see how well most of them adapt.

The aesthetic terrain is probably one of the most controversial in any analysis of a product, since it is a very personal perception and of which everyone can have an opinion. For objective purposes, this keyboard has four different colors : white, black, blue and pink. The one I chose was black, not for anything in particular, but because I believed it could better match my iPad Pro in space gray.

It stands out for the round shape of its keys. It is not something exclusive to this keyboard, but it is striking considering that the current trend is to see classic format with square shapes. However, there is no difference in use, since they are located in the same way and when pressing, there is no difference with that other format.

In size, at least for my taste, it is perfect for being light enough to move it comfortably or even carry it in a backpack without noticing being overweight, but with enough stability that it does not move when used on a table. If we talk about exact data, we find dimensions of 27.9 cm long, 12.4 cm high and 1.6 cm thick. The weight is 423 grams.

This keyboard is compatible with several devices, although it will require having a minimum software version to function.

Obviously these devices must have bluetooth drivers, although in the case of Apple there are no problems because the iPads and Macs that have these versions of software already have it incorporated as standard. The same goes for Android tablets. In Windows most computers also come with bluetooth, but if it is a desktop PC assembled to pieces, you must ensure that you have it.

Set up the Logitech K380

First of all, to say something outstanding and that it is essential for the keyboard to be used, you need two batteries , specifically AAA batteries. The duration of these will vary at the end of the quality of these and the use made of the keyboard, although in general it can take several months without having to change them. It should be noted that two are included in the keyboard case.

Once the batteries have been placed in their corresponding places at the rear, the switch on the left side must be activated. This must be facing up and it differs by having an inner tab in green when it is on and orange when it is in the off position. However there are several led lights on the top of the function keys that also serve as indicators.

Once it has turned on, we must go to Settings> Bluetooth on the iPad and press the # 1 key for three seconds. The keyboard name will then appear on the screen and you will have to click on it to link them. Once this is done, it will be available for use, and you can also remove the on-screen keyboard by pressing F6.

It also has a curious as well as useful function, that of being able to exchange between three devices. How? Well, configuring them in the same way through keys # 2 and # 3 . Each of these keys will be associated with a device, so it will be enough to touch any of them to go from using it on an iPad to another device such as a Mac or a Windows PC.

I don’t want this to look like a promotional review or anything similar, since it isn’t. However, I must admit that it was difficult for me to fault this keyboard. In the aesthetic field I have already mentioned that it seems to me that it makes a very interesting combination with my iPad and its table stand, so at first it is something that calls me to use it. 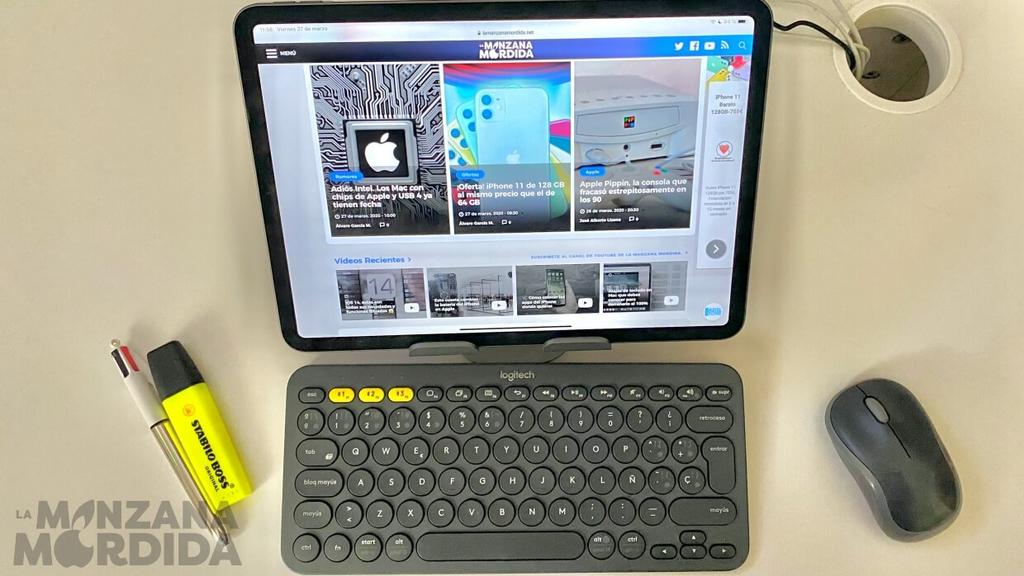 Something that I really liked is the fact that I can use it on my iPad and MacBook interchangeably. I usually have both computers on my desk, working mainly with the Mac and using the iPad as a second screen to have data that I need at that moment or simply to have a chat view of my work group. However, there are times when my eyesight gets tired of using the computer screen, so I can do two things: the first is to distance it from my eyes, thus losing easy access to the keyboard and then using the Logitech keyboard. The second option is to use the iPad directly, but also using the external keyboard.

On any of my devices it works very correctly, especially with the typical keyboard shortcuts that we have in both operating systems. So I don’t miss an original Apple keyboard. Perhaps what I find most difficult at times is differentiating the cmd and option keys . Yes, it may seem silly to be in the same position as those of the Mac, but I was confused to find the legends “start” and “alt” on the keyboard, the others being seen in a darker color that is barely visible to the naked eye .

Another downside that perhaps I may have is that sometimes its operation has been deactivated without prior notice after several minutes without being used, although I honestly believe that it is more due to a software problem in my current version of iPadOS than the keyboard itself. As a general rule it works instantly. There is no delay between pressing a key and the letter appears on the screen or performs an action, in addition to that 99% of the time it works as soon as it is turned on, except for that specific case that I have explained.

Writing as such is very comfortable, as the mechanical style makes it very easy to write long texts quickly. The route they have is, at least for my personal taste, the most suitable. It is very similar in distance to that of the Magic Keyboard of the Mac and even the Smart Keyboard, but much more attractive than the butterfly that the MacBook have from 2016 to 2018.

In short, I think it is a more than ideal keyboard for most users . Obviously I cannot recommend it to someone who uses their iPad solely for consuming multimedia content or playing games. Neither this keyboard, nor any other, since it will not take advantage of it and no matter how small the investment will not be profitable. But to those users who use it to write, no matter how sporadic the occasion, it is more than recommended.