Saying goodbye to the notch on the iPhone is something that a large part of Apple users ask for, and that is that the eyebrow of these devices in which the Face ID cameras, speaker and sensors are housed has not changed at all since the arrival of the iPhone X three and a half years ago. Now there has been a patent application from Apple that shows that they are developing new technologies that allow to eliminate that element at a stroke without the need to do without facial unlocking. Face ID and the notch are a forced marriage

2017 was the year in which the main telephony brands began to make telephones with “infinity screen” fashionable, which were characterized by eliminating physical buttons from the front and reducing the edges to give all the prominence to the screens. This fact forced Apple to look for an alternative to the fingerprint unlocking that it had on the buttons of its iPhone and from there was born what is still the best facial unlocking on the market. However, the sensors that allow it require a physical space that today has been impossible to reduce. Unlike other manufacturers, Apple introduces advanced 3D biometric sensors that perform a complete scan of the face and that is why it is not feasible to have a simple hole in the screen or integrate it into a small frame giving that feeling that the screen is still the protagonist. There was talk a year ago that the iPhone 12 would manage to reduce that eyebrow to integrate the sensors, but finally it has remained as it was in the iPhone X, the first device to incorporate this system.

Like every company, Apple registers dozens of patents every week, in this case with the United States Patent and Trademark Office. Does this mean that they can come true? Not at all, since they are only previous records of a development that Apple wants to safeguard for themselves without fear that another will overtake them. So these technologies may or may not be fruitful, but they are always indicative of research being done.

From Appleinsider they echo a new patent in which an advanced technology is described in which Face ID could be integrated under the screen of an iPhone. At a very technical level, they explain how a photodetector array can be capable of acting as a biometric sensor like the current one, creating 3D depth maps to achieve facial unlocking that is at least as efficient as the current one. 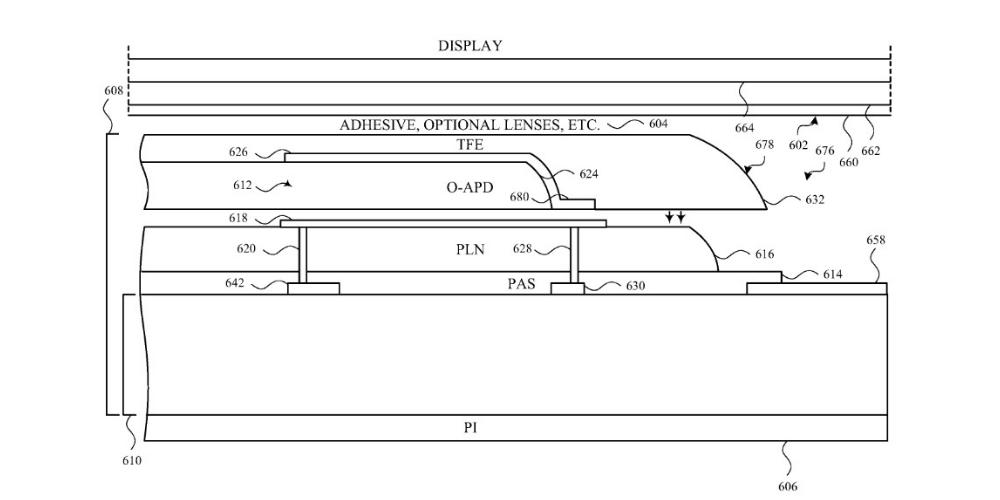 This technology would need to be integrated into TFT screens, either within it or being connected to them. In the advance of this document you can also find references to adding real cameras that also serve as a FaceTime camera. You can read the complete patent in the link that we leave at the end of this article.

We insist on emphasizing that this patent is not revealing an upcoming feature of the iPhone, as it may not finally arrive. If Apple finally manages to reduce the notch with this or another development, it will be at least in 2022, since this year’s phones are expected to reduce the current notch at most. We recall in any case that this document is just one of the many patents that Apple has registered in recent years in reference to under-screen sensor technologies.