In the panorama of smartwatches, one of the most popular and recommended options are those of the Amazfit brand, one of Xiaomi‘s subsidiaries. However, we learned about a little chaos when talking about its NFC technology, since not everyone knows what this technology hides in the brand’s watches. If you are thinking of buying an Amazfit watch, especially convinced by NFC technology, very attentive to everything that we are going to reveal to you. More and more Amazfit brand watches are integrating NFC for the comfort that it could offer us and advantages to have a payment system within reach of the wrist that we have seen so many times in Apple or Samsung watches, among others.

Impossible to pay with Amazfit watches in Spain

As much as we buy the latest model, we will not be able to launch the watch’s NFC payment system. We are not even going to be able to use the NFC reader to identify tags, since the software is limited to our borders. The company does not have the necessary agreements to be able to wear the card on the watch and its technology does not allow it to work through the link with the mobile. 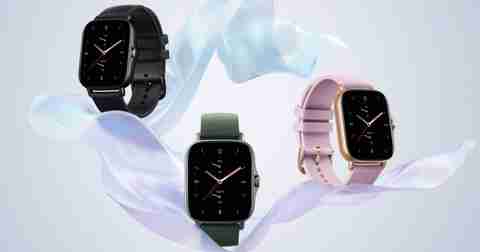 Therefore, although there are several watches of the brand that make it up, such as the Amazfit GTR, GTS or the Amazfit GTR and GTS 2 models, we will not be able to use it to pay. Inside it, the chip necessary for the payment system to work will be, but it will be covered by the software and even when browsing the menu we do not have the ability to do any function with this system or available options that make us think that sooner or later it will be will activate.

At the beginning of the arrival of Amazfit to the Spanish market, we could meet in the various stores with the NFC identifier. But as the law in Spain establishes, it is only possible to refer to those functions available and for that reason it has been successively withdrawn. However, if we are interested in getting an Amazfit watch on online pages, even on Amazon there is still a trace of the NFC in title and description although we really are not going to be able to use it. 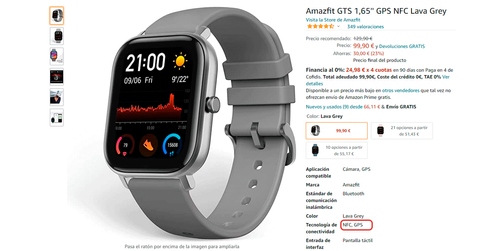 With the arrival of their latest Amazfit GTR 3 and GTS 3 they have been more careful and have left no doubt that the NFC is not something remarkable in Spain . There is no identification on the box and even on the pages where they sell it they have worried that it does not appear. An extra that we must say, it would be great for us, but nevertheless there is no way to take advantage of it.