If you are a fan of MMO games (including the most common ones, MMORPGs ), you are probably used to performing combos and rotations with various key combinations. What if we told you that there is a keyboard specifically designed for it and that it will allow you to configure your combos with a single key in an easy and fast way? It is clear that the usual way to play on PC is with a mouse and keyboard, but when it comes to MMO-type games in which we generally have to perform multiple combinations of keys in order to have good performance, it is common that we even end up with a sore hands and that we make mistakes frequently. With the keyboard that we are going to recommend below, this is over, since not only does it have perfect ergonomics for your hand, but it also allows you to program any action you want on each of its keys.

Razer Tartarus V2 (and Pro), the perfect keyboard for MMO

When you’re on the battlefield, it’s paramount that your keystrokes are instantly reflected in-game, from casting spells to activating abilities. With this keyboard, you’ll be able to bind commands and abilities to its 19 mecha-membrane keys to immediately activate them, all without having to move your hand at all. We also have a (fairly more expensive) variant, the Tartarus Pro, whose switches are opto-mechanical instead of mecha-membrane.

In addition to those 19 programmable keys, the Razer Tartarus V2 incorporates a scroll wheel (ideal for zooming in and out) with another additional button, as well as an 8-way digital thumbstick and more additional programmable buttons, adding a total of up to 32 programmable keys that you can configure, although it is true that the usual thing is to leave the central area for the conventional movement keys in MMO games (WASD).

If you play several MMOs and not just one, you should know that thanks to the Razer Synapse configuration software, you will be able to configure and store different profiles that will be automatically activated the moment you launch the game, so you will only have to invest some time initially to set up the device and then you can forget about it, because everything will work automatically. 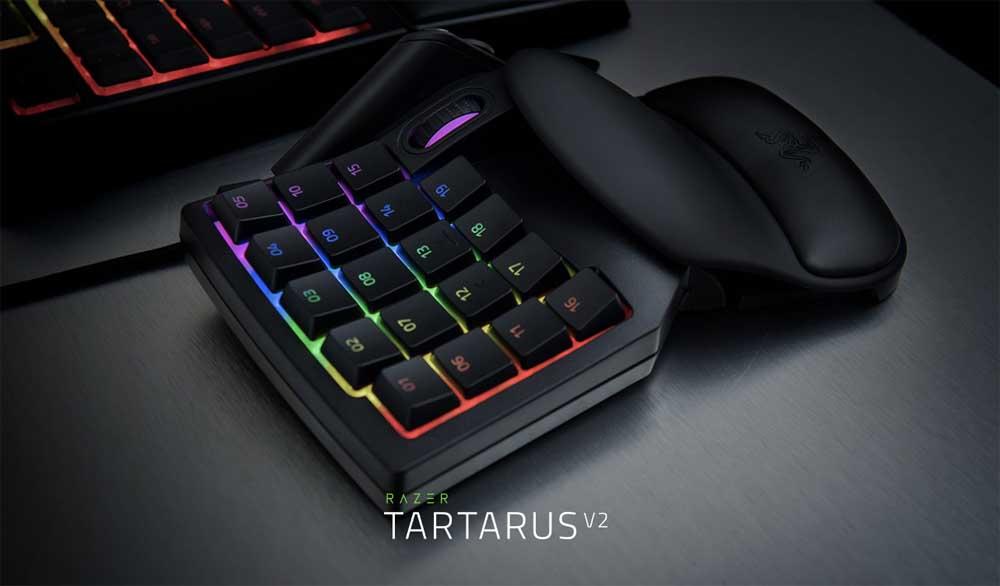 As you may have imagined, this keyboard is designed to be used with the left hand, it has ergonomics that will allow you to use it for hours and hours without feeling tired or uncomfortable since, unlike a conventional keyboard, it is designed to be able to hold your hand Stay still at all times without your posture being forced. For this reason, it includes a soft wrist rest and will allow us to have our hand slightly tilted upwards in a natural position.

Finally, it should be noted that it also has Razer Chroma RGB lighting, completely configurable both with effects and colors as you want, as well as with actions that can be integrated into some MMO games; for example, you can make your entire keyboard flash red when you’re low on health or blue when you’re low on mana. It is up to you to make the configuration that best suits you to favor your performance in MMO-type games.

Razer is in itself a brand that is not cheap at all, and the Tartarus V2 and Tartarus Pro MMO keyboards are proof of this. Both have been available on the market for quite some time, and the V2 model, which has mecha-membrane switches, is usually priced at around 80 Euros, while the Pro model usually costs much more, around 130 Euros.

Anyway, if you are a user who spends hours and hours in MMO type games, we recommend that you consider this keyboard as an investment and not as an expense, since once you have it configured and you have got used to it, it will you will be grateful and you will no longer be able to live without it.