When we go to buy a camera we have doubts about what we should choose. A reflex camera or a mirrorless camera that will allow us to shoot with the best possible quality even if we are beginners. But there is another question that perhaps we should take into account and that is: should I buy a Full Frame or APS-C camera? In these cases, we can clear up the main unknowns in the next few paragraphs.

If you want to take the best photos possible, you have probably thought that the best idea is to buy a Full Frame camera , even if they are more expensive. It is not always going to be the solution and it is not always essential to take good photographs: other factors have more influence, such as the lenses or the retouching that is done later. Full Frame and APS-C, what does it mean and what are they?

When we talk about Full Frame , we refer to the size of the sensor that the cameras equip. This size is equivalent to the same size that 35mm films have traditionally used, being another name by which they are known. A Full Frame sensor has a surface area of 36 x 24 mm , while in APS-C cameras the sensor is smaller ( 22 x 15 mm on Canon cameras and 24 x 16 mm on Nikon cameras). By comparison, the sensor in a current high-end mobile camera is around 6.2 x 4.5mm ; almost 12 times smaller than a Canon APS-C sensor and 31 times less surface area than a Full Frame sensor. 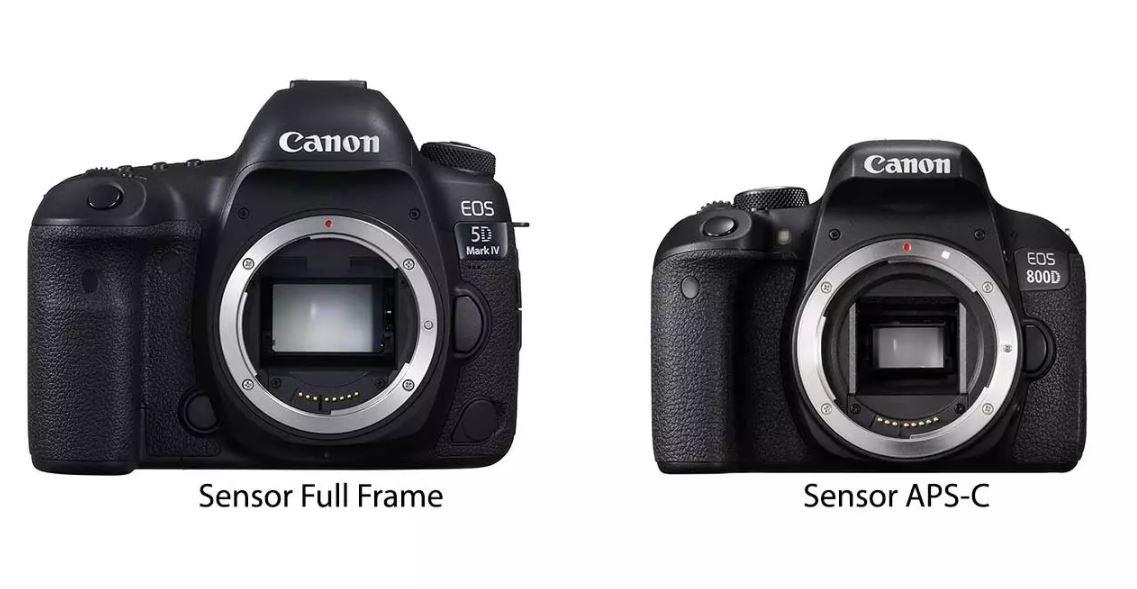 The size of a sensor is a very important factor, but it is not everything. We also have another size known as Micro 4/3, 17.3 x 13 mm , used by manufacturers such as Panasonic or Olympus in many of their reflex and mirrorless cameras.

Another format used by professionals is known as medium format , also called medium format, which depending on the manufacturer can have sizes of 43.8 x 32.8 mm, or even 53.4 x 40 mm , the latter being 2.5 times larger in size than a Full Frame sensor. These cameras offer spectacular and unbeatable image quality, but they also cost tens of thousands of dollars. 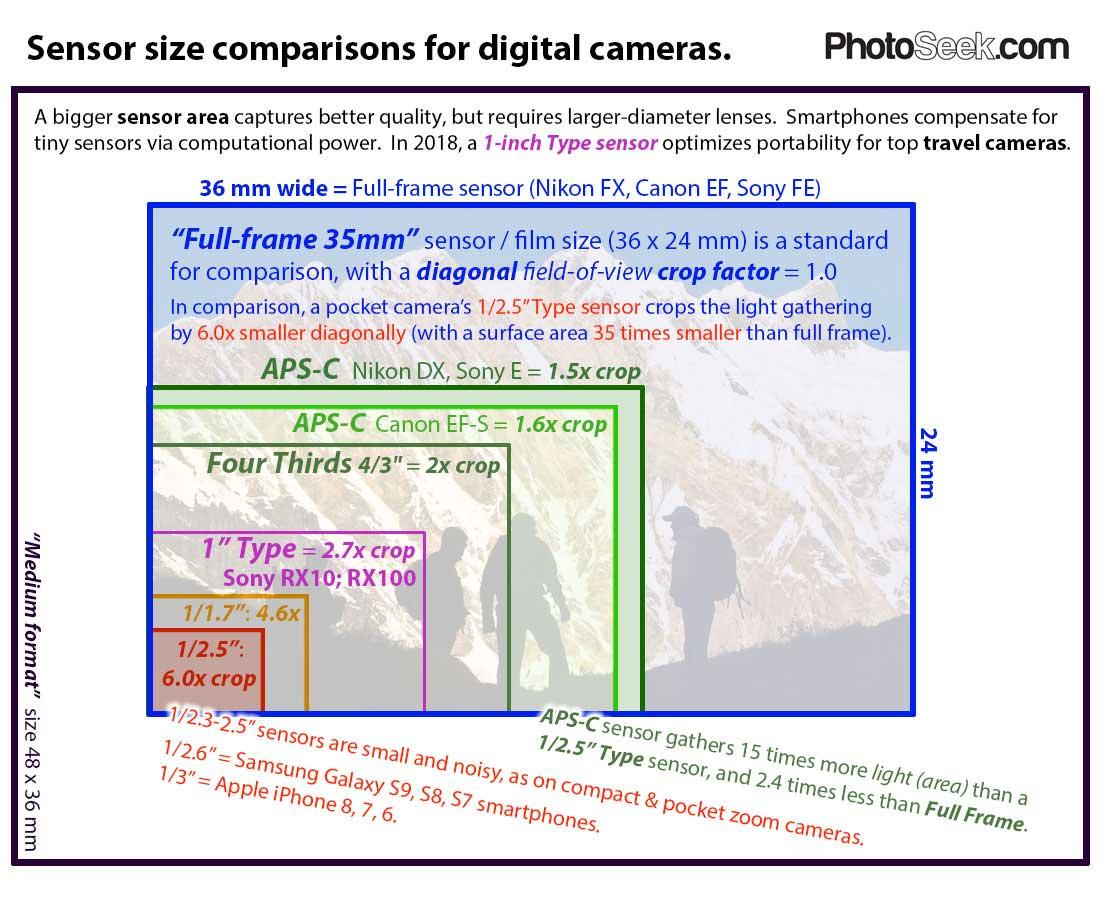 What should we consider

There are a series of factors that can help us with the comparison, definitive factors to know how to choose or know how to differentiate between Full Drame and APS-C, how are they different or what should we look for when betting on one or the other?

When you see photos of professionals, you surely think that “with that camera and equipment I could do it too”. And the truth is that you can do it. What differentiates a good photo from another is not the camera, but the light . Photography, as its own etymology indicates, consists of “recording” or “writing” light. There are historical photos that have been taken with much worse cameras than yours.

APS-C and Full Frame cameras usually equip sensors that offer very similar resolutions. For example, an 800D has a 24 MP sensor, while a 6D Mark IV has a 26.2 MP sensor. The key, as we say, is in the size of the sensor . A Canon Full Frame sensor is 2.61 times larger than the one fitted to its APS-C cameras. In reflex cameras, we can have a Canon 5D Mark IV , 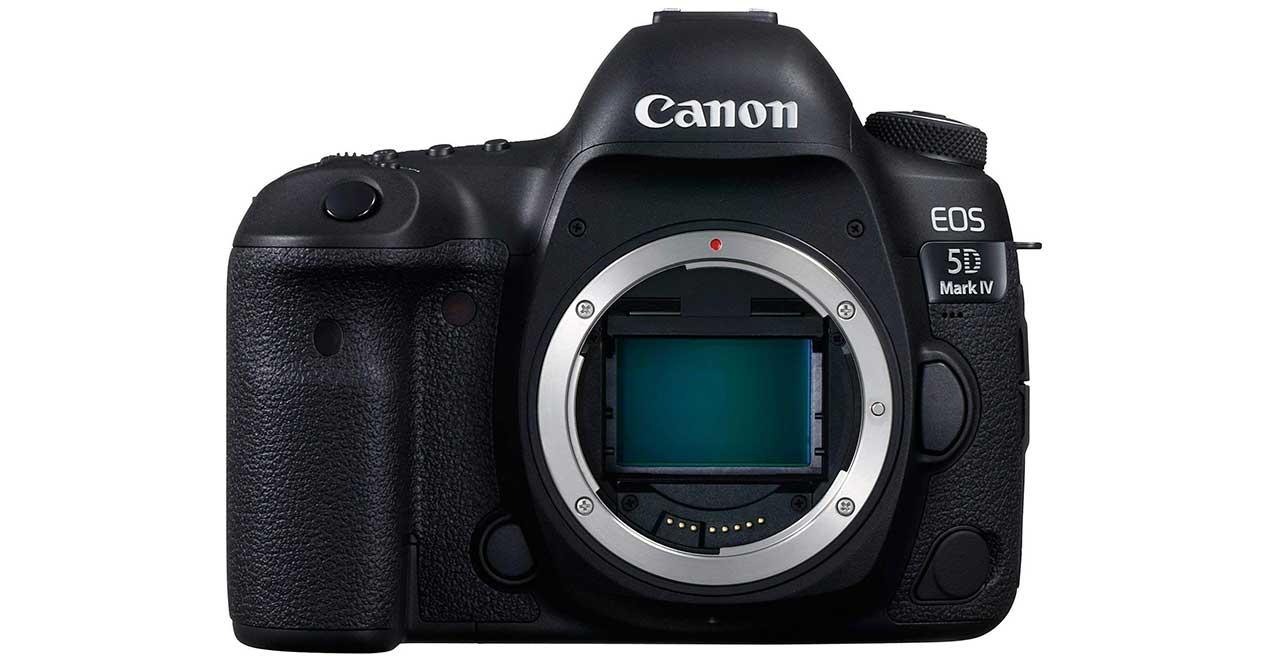 The larger the sensor size , the less noise the image will produce . For example, if you take a photo at night with ISO 800 on your mobile, you will find a horrible image. With a recent APS-C camera you will hardly see the noise if you don’t zoom in, and with a Full Frame it will be even more difficult to find it. The reason is that the pixels of the Full Frame sensor are larger at a similar resolution, so the image quality captured by each of them is higher.

This is the reason why Full Frame cameras are the most recommended for taking photos in low light situations , such as astrophotography. With them we will get the best photos, although as we can see just above we do not need the best camera on the market to take the milky way. On the other hand, in situations with good light, it becomes very difficult to distinguish the results of a good APS-C camera from a Full Frame one , but the latter have something that differentiates them and that gives the photos that professional touch: the range dynamic .

Dynamic range is something that will sound familiar to you from HDR, and it really is something that is related. A photo in HDR with our mobile is actually a mixture of three photos taken with different exposure , in such a way that the dark areas are obtained from the brightest photo, and the brightest areas are obtained from the darkest photo to offer a final image . with more homogeneous lighting.

Full Frame sensors, thanks to their larger pixels , have a greater dynamic range , being able to capture areas of high brightness and very dark areas (without the need to do an HDR) . For example, in a sunset , if we take a photo of a person with the sun from behind , we can get more details of their face with a full frame camera without having to overexpose it . In addition, the full frame sensors show that pastel and creamy tone of the photos that is so professional; something that is more difficult to achieve on an APS-C sensor camera, but can be done with the right lens and retouching.

Sensor size affects the angle of the final image captured by a lens. The camera lens projects an image onto the sensor. This is the reason why most APS-C camera lenses are not Full Frame compatible , since a Full Frame camera captures a larger image, and black borders are often seen.

The reference size used is that of Full Frame sensors as they are the same size as a 35mm negative. A 24mm lens will give you an angle of view equal to a 24mm lens on an analog camera . However, on an APS-C camera , the crop factor is 1.6 times on Canon cameras, and 1.5 times on Nikon cameras. 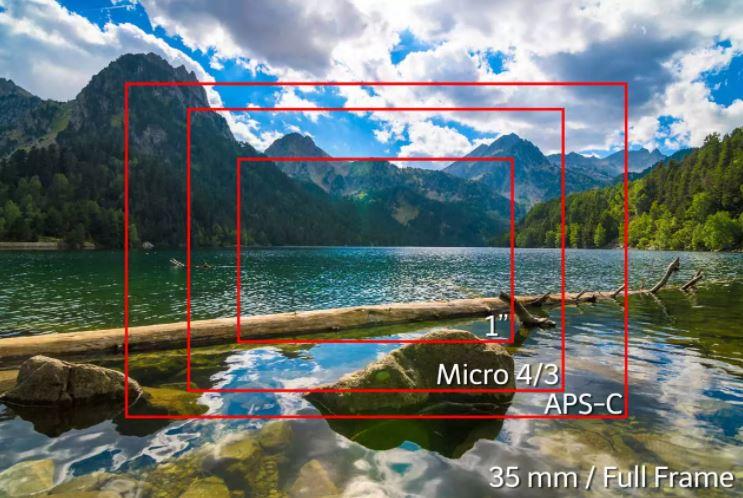 For example, the 24mm lens intended for Full Frame will actually have a focal length of 38.4mm (24 x 1.6) on a Canon APS-C camera, or a 50mm will actually be an 80mm. The aperture is also reduced , so images will appear slightly darker. In exchange, there is the advantage that you will have more zoom . For example, a 300mm telephoto lens will become 480mm on an APS-C camera, which can be an advantage when shooting sporting events or wildlife photography.

Thus, normally the cameras that we buy with kit lenses come with an 18-55 mm , while a Full Frame is usually equipped with a 28-70 , which is the focal length that it is more or less equivalent to. These lenses are very versatile, and are usually ideal for all kinds of situations; they have a decent wide angle, and they also have some zoom.

As we said, manufacturers usually offer Full Frame camera lenses with higher image quality, construction, materials, aperture , etc. However, in APS-C we also have a wide variety of lenses ; especially when it comes to wide angles , where we can get 8 or 10 mm lenses , which are equivalent to 12.8 or 16 mm in Full Frame. If we were to use those lenses on a Full Frame camera, we would find heavy vignetting with all black edges. 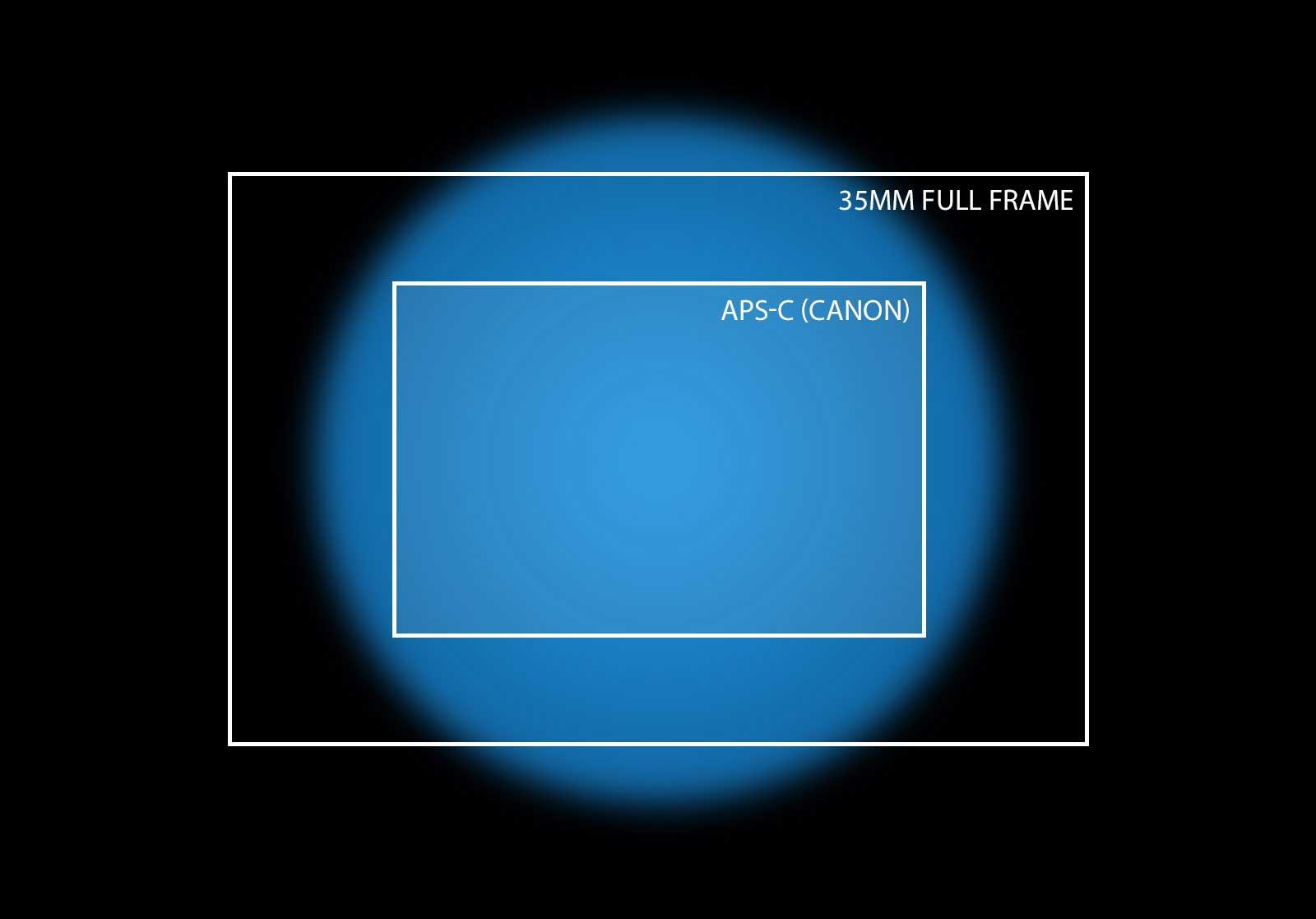 In the same way, some full frame lenses can be used in APS-C , but with a zoom factor. It is important that you see if you are going to be able to achieve similar lenses in Full Frame to the ones you already have if you are prepared to take the leap and sell your current equipment.

Finally, the quality of Full Frame lenses is usually higher , which also makes their price higher. Canon’s L-series offer some of the best lenses on the market, which is why they are the most widely used by professionals.

One of the great differences between the reflex and mirrorless cameras of our mobile phones is the quality of the background blur they have. Some mobiles are including a software blur with portrait mode , but it is still very far from what a good camera offers.

The blur effect in an SLR or mirrorless camera is achieved by setting the lens to its maximum aperture . With a 50mm f/1.8 we can get a lot of light into the sensor , in addition to reducing the depth of field. This means that the point that we will have focused on in the image will be very short , focusing attention on it (for example, the face of a person in a portrait).

The blur effect is greater in Full Frame than in APS-C . For example, a portrait at f/4 on a full frame will produce depth of field and blur similar to that achieved by an APS-C camera at f/2.8 . However, this also works against Full Frame, since to achieve maximum sharpness it is necessary to close the lens more . At the same focal length, if the maximum point of sharpness of an APS-C is reached at f/11 , in a full frame it will be f/16 .

Which to choose? quality and prices

The quality/price ratio of a camera with an APS-C sensor is very difficult to match. Professional results can be achieved with a €500 camera and a € 100 lens , and the improvement of paying four or five times more is not that substantial . The reason why Full Frame cameras cost more is because they are geared towards professionals who can afford them and pay for them, as well as having extra features like rain resistance, faster burst shooting speed, or higher build quality.

All this makes the development of these cameras more complex and expensive , which makes the price higher. In addition, fewer Full Frame sensor cameras are made than APS-C , which adds to the fact that their components are more expensive.

Ultimately, go with what your budget allows. The more money you invest, the better image quality you will achieve. However, if you are looking for good value for money, go for an APS-C like the 200D or the Sony Alpha A6300 .