One of the most important goals of major software developers in general, and browsers in particular, is to keep their customers safe. For this they do not stop launching new functionalities that are responsible for protecting the use and data that pass through their projects. A clear example of all this is the work that Microsoft does with its Edge browser.

This is something that we have been able to verify since its initial launch, something that has settled over time. We tell you all this because right now Microsoft has announced that the Edge Vulnerability Research team is testing a new feature in this regard. They have called it Super Safe Mode and it has been created to bring new security improvements to the program, without significant performance losses. What is Edge’s Super Safe Mode

Thus, when the new Super Safe Mode is enabled, Microsoft’s Edge browser removes the JIT compilation from the V8 JavaScript engine. This alone reduces the attack surface that internet attackers can use to hack into user systems. At this point it is worth knowing that based on some studies carried out throughout 2019, around 45% of the vulnerabilities found in the V8 JavaScript engine and WebAssembly were related to the aforementioned JIT compiler .

Therefore, this reduction in the attack surface is intended to significantly improve the security of users and their computers. This eliminates about half of the security flaws related to the V8 JavaScript engine. This is something that Johnathan Norman, Head of Vulnerability Research at Microsoft Edge, lets us know. Thus, with this movement it is possible to eliminate half of the security flaws caused by exploits. In addition, we must know that at the same time each vulnerability avoided with this method complicates the arrival of others.

Activate the new security feature in your browser

To put it another way, Super Safe Mode saves problems for users, but increases those for attackers to be successful. Also, although the JIT compiler is designed to increase the performance of the computer during program execution, disabling it in Super Safe Mode does not always have negative effects.

At the same time, we must know that this is a mode that is still in the experimental phase. But with everything and with it the Super Safe Mode can be activated by users in the preliminary versions of Edge . Specifically, we refer to the Beta , Dev and Canary versions. For this, it is enough that we create the following in the address bar of the program:

Next, we will only have to activate the new security feature.

Changing third, Microsoft is also testing in its preliminary versions of Edge a new function, but now related to the use of tabs . Thus, if we have a lot of tabs open, the ones that are running in the background can also consume resources. This will negatively affect system performance and browsing experience. Therefore, Sleeping Tabs , a function to reduce memory, CPU and battery consumption, is now being tested.

This is a feature that Microsoft has added to Edge 94 in order to put inactive tabs to sleep. It is also important to know that these, to differentiate themselves from normal eyelashes, will look a little faded. Also, when you click on a tab when idle, it will be activated immediately. We have the possibility to adjust the time interval so that they go inactive to a minimum of 5 minutes. 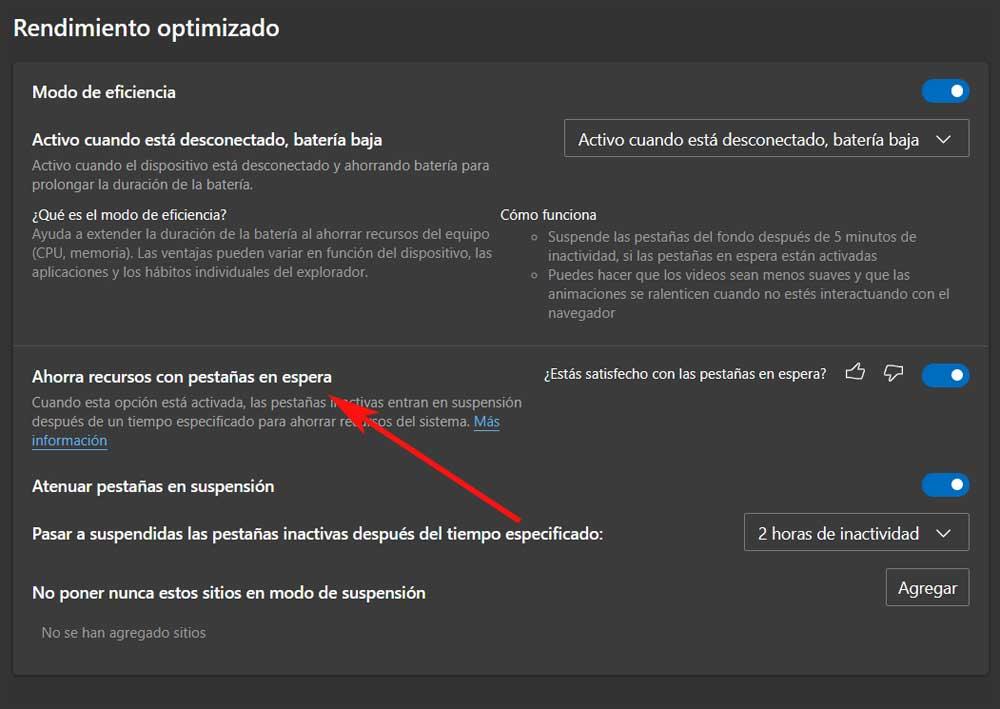 To activate this in the Canary version of Edge, we access its configuration and go to System and performance. Here we will see the section on Saving resources with tabs on hold so that we can activate and configure it.