Just a few hours ago, new details of the rumored Xiaomi Mi 11T and the Redmi K40 Ultra have been leaked, a phone that could arrive in Spain, once again, as the Pro version of the aforementioned “T” series. This allows us to have a little more information about what the cheap alternatives of Xiaomi’s current top of the range, the Mi 11, would offer.

Specifically, the new data allows us to advance some of the specifications, shedding light on the screens of the two mobiles, but also their cameras and the chipsets of the phones. According to the XiaomiUI group on Telegram, the Mi 11T is being developed under the codename Amber and the model number K11R. For its part, the top model has the code name Ágata and the model number K11T.

Good screens and cameras for the Mi 11T

The Xiaomi Mi 11T is the more limited of the two terminals and according to the filtration that we host just below these lines it is configured to show off a 120 Hz screen with a 20: 9 aspect ratio. Interestingly, the display on its predecessor, the Mi 10T, was 144 Hz, so it’s a slight step back. In exchange, the brand could add OLED technology, compared to the LCD panel of last year’s model.

As for the camera, the Mi 11T can use a 64MP sensor made by OmniVision in its main lens, compatible with an 8MP Sony IMX355 wide-angle camera and a 3x zoom “telemacro” sensor. Regarding its power, it seems that this model would be powered by an unnamed MediaTek chipset, but that it could be the Dimensity 1200. 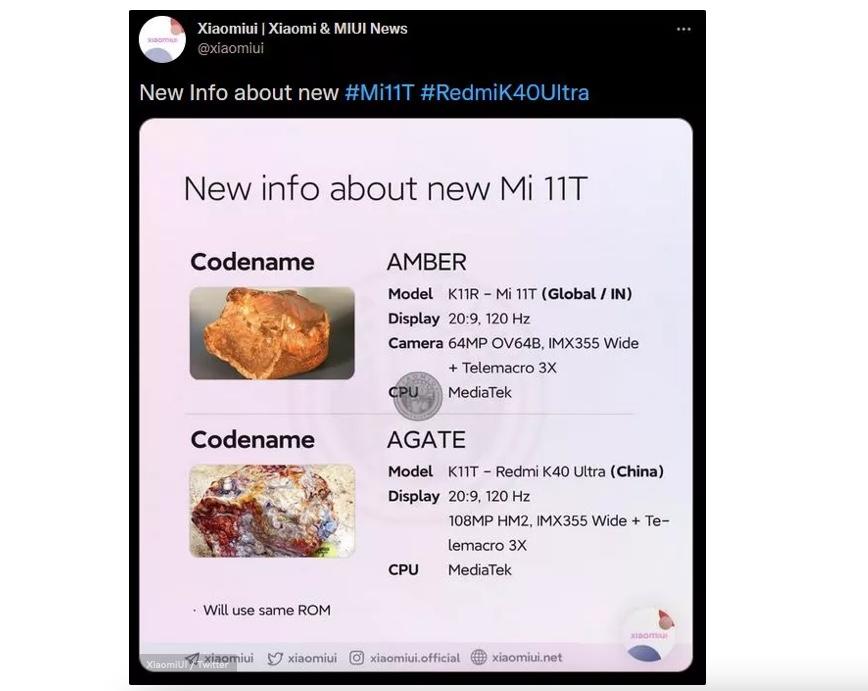 As for the Redmi K40 Ultra , which could arrive in our stores as Mi 11T Pro , the leak suggests that it would sport the same screen as the previous mobile, with the same refresh rate and screen format, but with a drastic change in its camera. rear. Instead of mounting the 64MP sensor, the K40 Ultra can use a 108MP HM2 sensor on its main lens, while the other two sensors remained unchanged.

Chipset-wise, the current Redmi K40 series devices have Snapdragon 888 processors. However, this leak suggests that the K40 Ultra will opt for MediaTek hardware instead, so it looks like it would also use some of the latest Dimensity. generation.

The current Mi 10T were presented in October of last year so we expect a similar date for these new high-end of the firm.