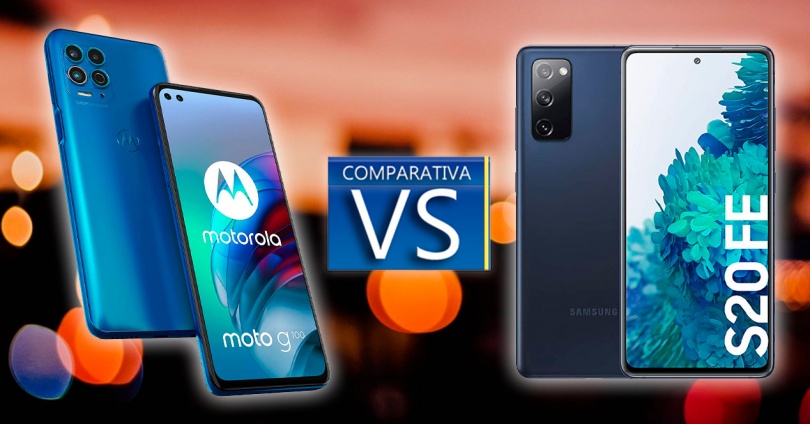 Although Motorola and Samsung do not usually focus on the high-end in the same way, this time we run into an exception since the new Motorola Moto G 100 that was presented a few months ago has become an alternative to the Samsung Galaxy S20 FE that does not It is no longer a great recommended for its close value for money.

We know how pleased it can be to make us opt for one of these two models and that leads us to face it point by point, first cooking everything that makes them look alike but also the aspects that make them different. Based on that and of course knowing its price, we can decide between staying with one or the other. Identical or similar characteristics between the two

We begin by knowing those points where both terminals have a lot to share, aspects that will not be drastic for our decision since in both cases we will have a similar result. Some points that however we must know in depth, because there are some other small details that could make us look at one of the mobiles in a different way.

Power and configuration at the same level

The first aspect where we stop is the processor, because in this case we have level processors, where although it is not the same, they are very similar. The Motorola Moto G100 uses the Snapdragon 870 and meanwhile the Galaxy S20 FE benefits from the Exynos 990 in the 4G version or the Snapdragon 865 in the option with 5G. Spark manufactured in 7 nanometers that perform equally well in games or demanding processes. Obtaining in this way a very similar performance that will allow you to open apps, games and download online content in practically the same time, although connectivity also comes into play in the latter. The same occurs with the configuration, since Motorola and Samsung mobiles share LPDDR5 RAM type memory and a storage with UFS 3.1 storage technology. In the memory options there is some small difference, with the Motorola Moto G100 only available in 8 GB + 128 GB of memory and the Samsung Galaxy S20 F also with 6 + 128 or 8 + 256 GB.

Connectivity, at least on the 5G model

Another of the similarities between these two smartphones appears when talking about connectivity, since the two smartphones incorporate to their credit the best positioning of the hand of GPS, A-GPS, GLONASS, Beidou and Galileo. They do not forget to integrate the NFC, as well as the possibility of using two Dual SIMs at the same time, only changing that the Bluetooth 5.1 LE connection is in the Samsung S20 FE version 5.0 and that only the Motorola has an audio jack. Moving on to talking about mobile networks there is a difference if we look at the Samsung Galaxy S20 FE, but not if we do it with the S20 FE 5G. The highest speed with mobile networks is always achieved with the only Motorola Moto G100 model and to enjoy it at Samsung you will have to think about that advanced model that is the same in everything else.

Differences between the Moto G100 and the Galaxy S20 FE

After reviewing everything they have in common, it’s time to take a look at what really differentiates these two high-end smartphones that have big differences that will make us stick with one or the other.

One of the most representative elements of the Motorola Moto G100 is the double front hole that integrates into its screen on one side, while Samsung is based on its already characteristic hole in the central screen. Some design differences that do not stop there as the materials change between the two models to make way for the predominant plastic in the Motorola and where the Galaxy S20 FE also uses plastic with aluminum alloy and glass to give a more premium feeling to the hand . Something that also changes is the resistance, since the Galaxy S20 FE has IP68 protection against water , something in which Motorola lagged behind with IP52 resistance that protects against dust or dripping water. On the screen, security is borne by Corning Gorilla Glass 3 in both smartphones, which is an extra point very much in favor of both smartphones, although it does not make as much difference as protection against water.

When deciding to buy one or the other, the screen will be very important, since the Motorola Moto G100 is satisfied with a 6.7-inch IPS LCD panel, while the Galaxy S20 FE with its 6.5 inches has a panel Better Amoled that will deliver sharp blacks and the ability to use the Always on Display to see the time or notifications at all times. To protect both panels we ran into Corning Gorilla Glass 3, a draw when it comes to fighting scratches. Both have Full HD + resolution and improved frequency rates, with 90 Hz for the Moto G100 and 120 Hz for the S20 FE, which will allow you to achieve a higher image speed that will make a difference when playing games or when browsing the terminal. Panels that have a high pixel density, honoring the high range in which they are placed. In turn, both screens boast rounded glass with 2.5 technology as well as HDR 10 technology.

In photography and video there are also great changes in the results between the Moto G 100 and the S20 FE, its main sensor is composed of 64 Mpx and 12 Mpx respectively, although here is not the big difference because we will only see it in the Level of detail. The second lens is the great place where Motorola has 16 Mpx before Samsung’s 12 Mpx and Samsung counters with an 8 Mpx telephoto lens and 30x digital zoom for which Motorola is unrivaled. Meanwhile Motorola offers a macro sensor to photograph the smallest 2 Mpx objects and a ToF 3D sensor to achieve the best and fastest focus. Ahead, Motorola’s selfie cameras have 16 Mpx and 8 Mpx in ultrawide mode so that more people take the selfie with that second main lens. Samsung instead has a 32 Mpx lens with an improved angle.

Moving on to the video, we verify that only the S20 FE has an optical image stabilizer and the Moto G 100 has EIS, with the following recording options:

The time that these phones will be in operation will depend on the software, the use that the demos and the capacity of its battery, where the Motorola Moto G100 has a larger battery with its 5,000 mAh compared to the 4,500 mAh of the S20 FE. Respectively they support 20W and 25W of power in fast charging, only with wireless charging in the Samsung model. A difference that although it may seem minimal in capacity, can become dependent on the use we give it up to 45 more minutes of use. A notable difference that makes Motorola emerge victorious in such an important section and that above all it will be helped by the optimization of Android Stock as we will see later. Android stock before One UI

The two terminals come equipped with Android 11, but nevertheless Samsung includes One UI 3 that makes it very different when compared to Motorola without any type of addition beyond some minimal option or correction. If we want more possibilities, One UI offers greater customization, options and countless additions, but on the contrary Motorola and its simplicity together with Android make it boast of speed. The Samsung Galaxy has the advantage that it will benefit from the 3-year update plan for Samsung , which, having been launched before, leaves it with basically the same protection time and new features as its Motorola rival with 2 years of updates. What is it for us?

We come to the moment of the decision and to know the prices, where the Motorola G100 stands at 499 euros, which is close to the 484 euros for which the Galaxy S20 FE 4G is found. Things change when looking at the 5G model, since the price increases to 540 euros and the price difference turns around with respect to Motorola.

Taking into account the similarities and differences that we have seen, if we want better cameras, the Samsung mobile wins , although the decision is not easy. We are left with the S20 FE since it has the OIS stabilizer and the telephoto, but on the contrary if we are concerned about autonomy and this is our priority, the Motorola Moto G 100 is a good asset with its capacity and Android stock at the back that promises us the fluidity and simplicity that many want in a mobile. With respect to everything else, they are two smartphones that are potentially on par and their differences will be drastic in the purchase decision. A clear difference will also be in 5G, where if we want a Samsung model, we will have to decide whether to save a little to go for 5G or settle for 4G.