Programming is the present and, in the same way, it will be the future. If we have a child in our environment, we will surely be surprised by the skill with which, at a few years old, they begin to manage technology, especially mobile phones. And it is that today’s generations can see and understand technology in a completely different way than we can understand it. Therefore, if we have the opportunity, we can start teaching programming, especially for programming concepts, as soon as possible, as it will help them to be prepared for the future.

Obviously we are not going to be able to start programming using tools like Unity, Unreal Engine or in an IDE like Visual Studio Code. However, online we can find a large number of resources that, of course, will allow children to begin to understand what programming is and how technology works a little more deeply. At what age can we teach programming

Although programming as such we would not recommend before the age of 6, from the age of 3 we can start working on certain skills, such as logic and rational thinking . From the age of 3, the little one begins to ration, and therefore we can start preparing the ground with all kinds of puzzles and logic games. All of this, of course, adapted to your age to avoid frustrations.

From the age of 5 we can begin to teach them to use (under supervision and with control) technologies, such as computers and tablets. Always for learning purposes, never playful. And, of course, without taking your eyes off them.

In this way, from the age of 6 or 7 we can begin to teach programming with some tools that help them understand how a computer thinks. And go up the level and grade little by little. If the child becomes frustrated or bored, it is best to put programming aside. You will have time to learn it later.

Programming resources for the little ones 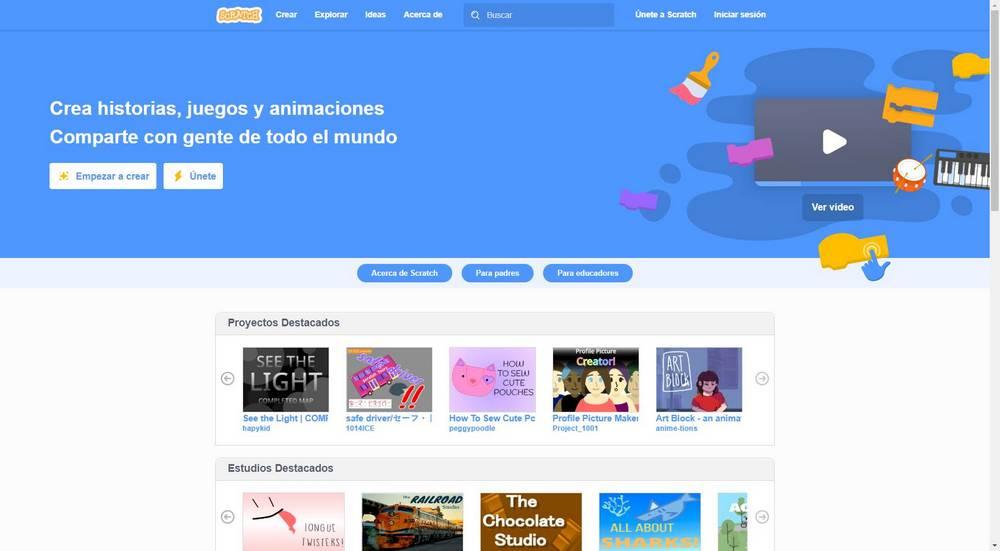 For those who do not know it, Scratch is a programming platform created by MIT designed for children and users who start from scratch, without prior knowledge. Programming through this platform is quite limited, but it is one of the easiest ways to teach the basics of programming.

Actions can be placed by dragging them from the list to the code box. Hence the importance of starting to work with puzzles.

Furthermore, everything that is done with Scratch is shared with the community. In this way, we can teach children to share and also help them solve problems and take ideas from other similar projects.

It is recommended to start using Scratch from 8 years. Although we can also start earlier (between 5 and 7 years old) thanks to ScratchJr . 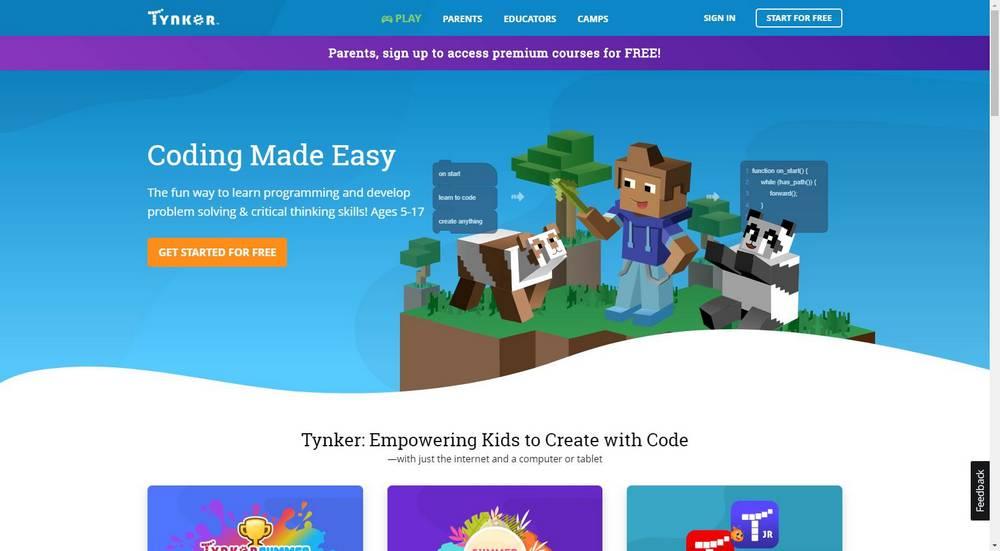 Tynker is another learning platform using interlocking code blocks. Similar to Scratch, children can place and test code blocks so that the character in question performs some actions or others. It also has an app, Tynker Junior, to be able to teach programming anywhere needing just a tablet.

This platform also allows access to free courses that allow children to start expanding their programming knowledge. We can even access more professional programming language courses, such as JavaScript and Python, through a subscription model.

The recommended age range for Tynker is between 4 and 7 years old. But it is recommended to have previously worked on rational thinking skills to avoid frustration. 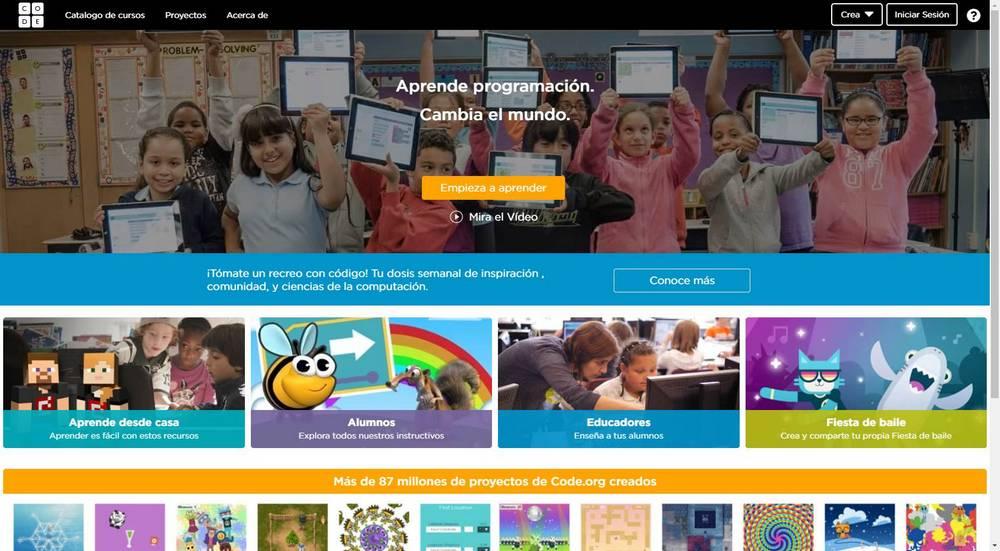 On this website we will be able to find a large number of programming tutorials for all ages, from 4 or 5 years old. It is a platform that mixes seriousness with an appeal for the little ones. We can also find tutorials created by Bill Gates himself (founder of Microsoft) and Mark Zuckerberg (founder of Facebook), such as courses to program mini-games with characters from Minecraft or Disney, among many other options.

The courses are ordered by grades, so that we can easily find the most basic and simple, and go up depending on the level at which we want to teach programming. 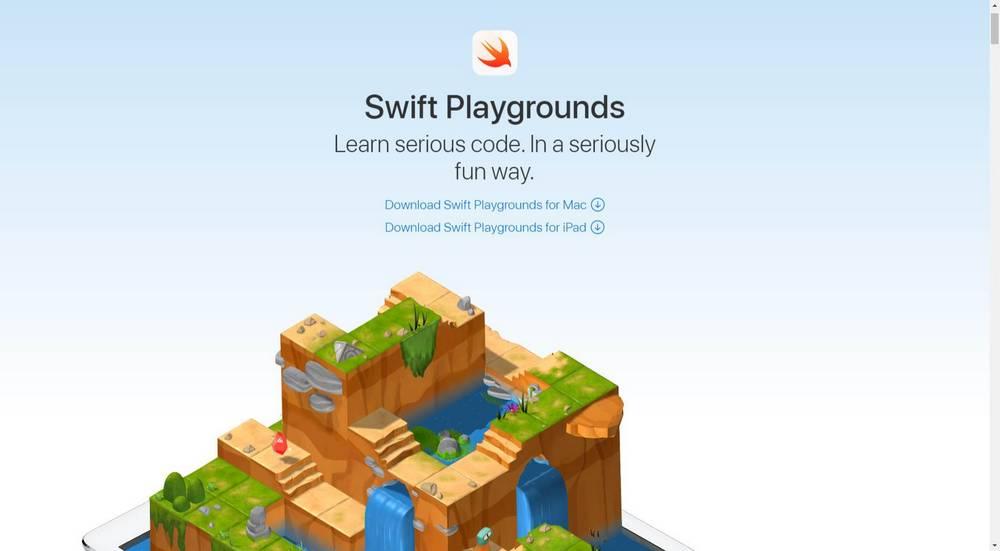 Once we have basic concepts, we can go up one more step and use Swift Playgrounds . This platform, developed by Apple, allows you to learn to program in your own programming language through games and without having to have any knowledge of code. It is a little more advanced than the previous ones (therefore, it is recommended for older children) and requires the use of a Mac or an iPad in order to use this program.

In addition to the previous platforms, which will help us start programming with the little ones, we will also find recommended programming languages for children. Of course, it should be borne in mind that, before starting with them, it is necessary to know well what programming is and how it works. We cannot pretend to start from scratch to teach these languages.

In addition, some of them are relatively simple languages, while others are highly complex and, although they are simple, they already require a certain degree of knowledge (which we can obtain through the previous platforms).

We recommend starting with these languages from 10 or 12 years old. Before that age, it is better to choose to use the previous platforms to learn the elementary concepts.

And if we want to start using code, but in a very basic way, we can do it with Swift .

And if we want to go a little further, and start with advanced programming now, we must choose simple environments and languages. JavaScript and Python, for example, are two very popular languages that have a relatively simple syntax and a large amount of resources available on the net to learn how to program. Another alternative to which we can resort is Lua , since thanks to Roblox Studio we will be able to start learning this language in a simple way.

Of course, the projects we start must be focused on children. And the best way to do this is to start creating simple interactive games.